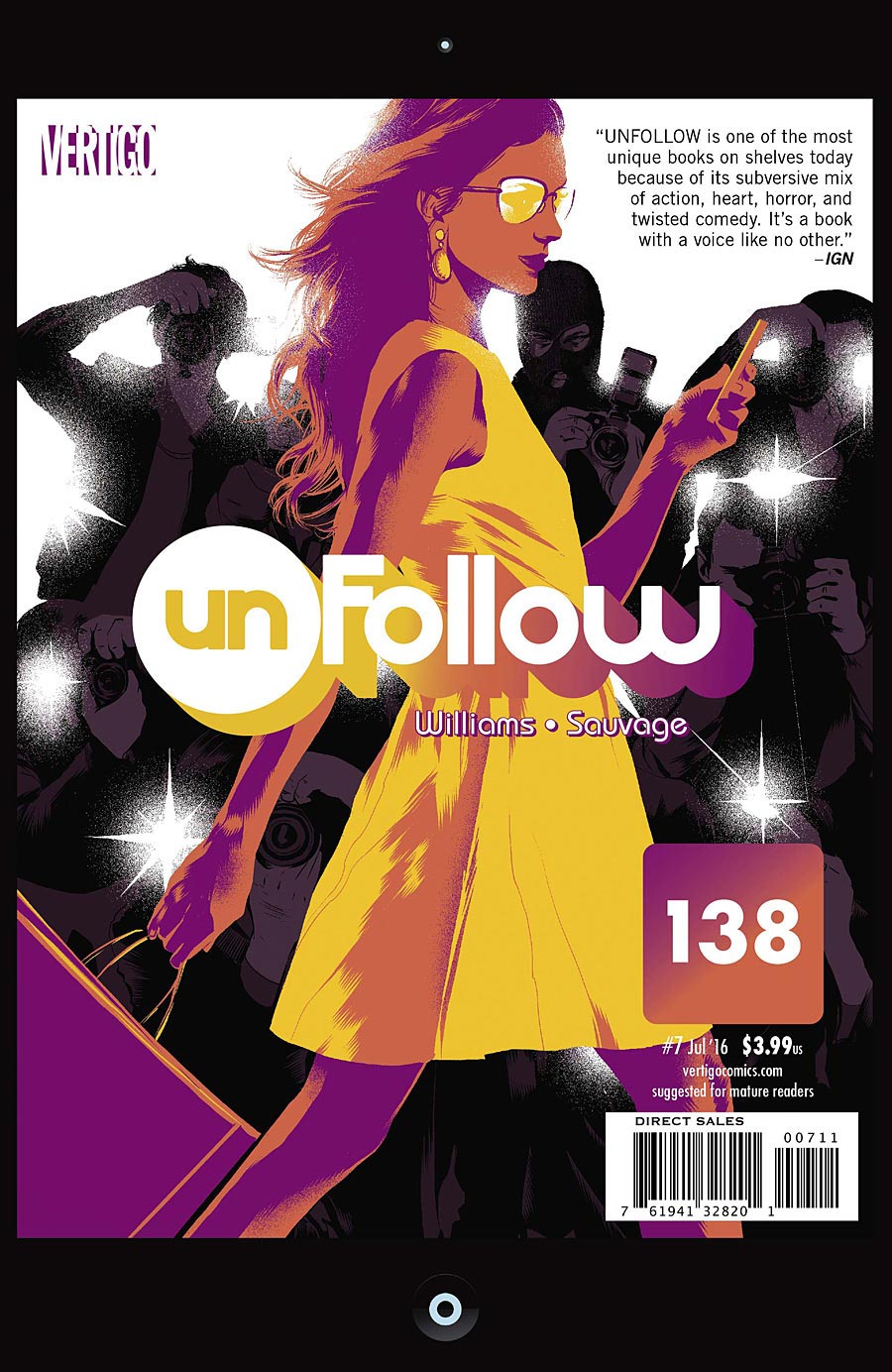 138 inheritors of the 140 fortune remain, but one of them — Courtney Redford — is already used to the spotlight. And to people trying to kill her. So what does any smart young celebutante do to avoid assassination in the name of greed? Well, launch a reality show, naturally.

With its first volume hitting stores in a matter of weeks, Unfollow is one of those books that’s probably fallen under most readers’ radar. With the recent editorial upheaval over at Vertigo and the announced Young Animal imprint at DC Comics proper seemed poised to take over its legacy, it’s easy to forget that there are still a handful of brilliant comics being diligently produced under the auspices of the legendary Vertigo line. And Unfollow is unquestionably one such book.

And with issue #7, writer Rob Williams begins to flush out some of the individual backstory for characters who’ve ostensibly just the world handed to them on a silver platter. Too bad that platter’s laced with arsenic. To wit, Courtney Redford — the seemingly one-dimensional rich bitch of the first arc — gets fleshed out here as an emotionally complex, morally grey, but desperately troubled young person with a history that warrants our attention.

It’s curious in a way to see guest artist Marguerite Sauvage taking on Courtney’s single issue tale. In such a brief time, I’ve come to associate her strongly with DC’s own resident party girl with a traumatic past, Kate Kane. While the Bombshells Batwoman may not have the same childhood history our more familiar Batwoman did, this issue of Unfollow may very well make me think twice about it when I pick up the next issue.

Like Kate, Courtney has her complicated relationship with her father, having been the victim of an attack meant to strike at the heart of his love for her. But it’s to Williams’ credit that we get a decidedly different result from Courtney’s coming of age. It’s no less compelling, although far less enviable. The nuance in her character — be it the literal throwaway reference to the Brothers Karamozov or her own surprise at not being able to offend a gaggle of reality show fans — transforms her story into something much deeper than I could have expected.

Sauvage’s full art duties (from pencils all the way to colors) certainly help marvelously deliver this kind of ambivalence in character. The artist works in this linework that feels so reminiscent of modernist advertising illustration — so fashionably utopian in a way. It really functions simultaneously as masquerade performance and window to the soul. Courtney is the classic blonde knockout, rich girl with a Paris Hilton lifestyle — and not, all in the same moment. And there’s something about Sauvage’s simplicity of shape and expression that really exposes that.

Ultimately, Williams has a huge canvas to paint with the 138 (and dropping) in Unfollow. It’s already clear that he aims for the kind of sophisticated characterization that mirrors the best television dramas and serial storytelling of the past decade. And if the first seven issues are any indication, this is going to be the book to watch for a long time to come. Do yourself a favor and catch up.