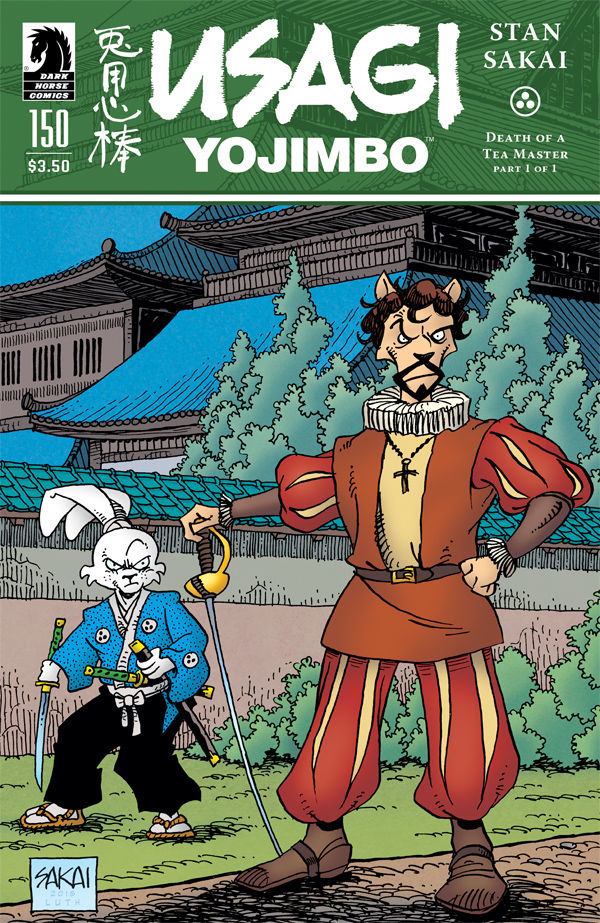 The masterful Stan Sakai hits a milestone this month as Usagi Yojimbo‘s 150th issue at Dark Horse Comics is released. After all this time with Dark Horse and Fantagraphics before them, Sakai manages to keep Usagi Yojimbo entertaining, enlightening and powerful.

This issue deals with some heavy topics, including the exploitation of the honour and customs of culture by a Western manipulator, and the act of seppuku. Sakai’s tone while discussing this ritual is grave and dark, as any discussion of the act requires. As with any issue of Usagi Yojimbo, through the story I found I learned things about feudal Japan and the traditions of the era, and the gravity of the topic at hand weighed heavily on this issue.

Sakai discusses this ritual with the greatest amount of respect and manages to keep this issue as young reader friendly as possible considering the topic at hand. This is a darker issue than some have been, with the Westerner in particular being a malicious and cruel person. Sakai writes and pencils the character well, making it obvious that he does not belong in this world. His arrogance bleeds from the page and his battle with Usagi Yojimbo is entertaining to read. He pushes our hero to places we don’t often see, which was interesting and befitting of a landmark issue like this.

Stan Sakai’s artwork is consistent from start to finish and he is a gifted visual storyteller. At this point there probably isn’t much to say about Sakai’s work as a cartoonist, but the visuals are as strong as ever in issue #150. His characters have amazing personality and the tone and gravity with which he discusses seppuku is impressive. He’s a legend, to say the least, and this is just another feather in a long filled cap.

Usagi Yojimbo #150 is a powerful issue dealing with a heavy set of topics. This one shot is masterfully executed and Stan Sakai’s mastery continues. Bring me more Usagi Yojimbo, 150+ issues just isn’t enough.