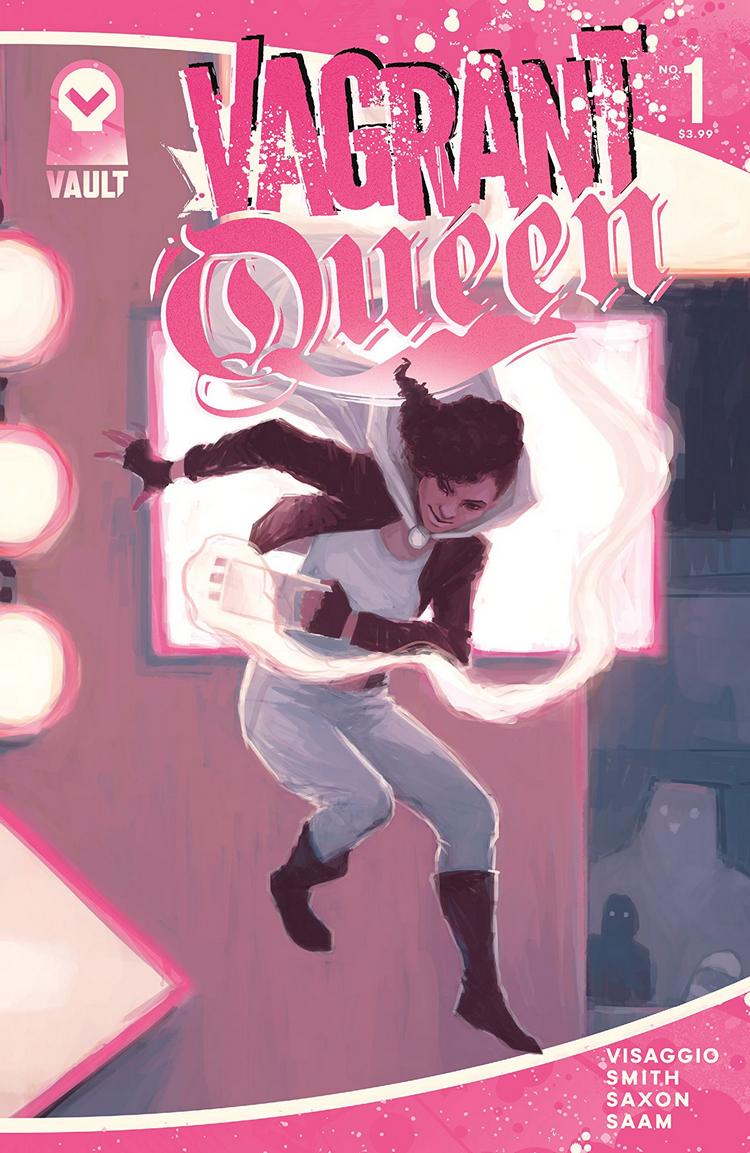 There are almost as many space adventures to tell as there are stars in the sky. Magdalene Visaggio has created a tale that takes some of the best qualities of sci-fi that has come before and mixes with a bright fun style that makes it irresistible. Vagrant Queen #1 takes readers on a space adventure that they won’t soon forget.

Magdalene Visaggio introduces us to her sci-fi space adventure with issue #1 of Vagrant Queen. With only a few pages of storytelling she immerses the reader in a world that the reader will quickly fall in love with. We are dropped straight into a story that feels like it has been going on for some time but without feeling lost. In fact, you go into it feeling familiar with the characters and the situation almost as if you were heading off to a galaxy far, far way. It’s easy to want to compare Vagrant Queen to the Star Wars saga but not because of any major story similarities but because of the adventure and memorable characters. One of the ways that Visaggio makes the reader feels so comfortable in this world is making the main character Elida so well known (which for her isn’t such a good thing.) She immediately is imbued with a back story that builds as she encounters more individuals. She becomes an automatically intriguing character that the reader wants to know more about. Although plenty of hints are dropped about her back story, there is little time to delve too deep into it as the action very quickly kicks into high gear. The pacing of the story is great and builds psychologically and physically from start to finish. Visaggio has packed so much into this first issue but it does not at all feel overloaded. In fact, it encourages the reader to want to go back and reread to not only enjoy it again but take in more of this world.

The artwork is perfectly matched to the mood of Visaggio’s story. Artist Jason Smith’s uses a very rough and tumble style for this issue to communicate the world that Elida is a part of. Everything has that “lived in” feel to it that make a story and world more realistic. It’s not a sterile space station that is crystal clean. The characters have lived in and make use of their world. What really stands out about Smith’s art are the expressions he masterfully renders for each character. Elida’s expressions tell the reader and the other character’s just what she is feeling in that moment. He does it so well in fact that there are times when the reader can almost see the characters come to life on the page. Smith also handles the action scene well and keep the readers eyes flowing with each punch and kick.

Harry Saxon brings the pages to life with lots of bright colors the keep the mood upbeat and fun. Stories like this can sometimes be lost in the sullen moodiness of dark space station corridors but Vagrant Queen does not have that problem. The colors pump up the excitement of the story and create a visual ambrosia for the eyes. Zakk Saam provides the lettering for this issue and does an exceptional job. He adds in some great visual sound effects to provide that all important aural dimension that comic books often lack.

Vagrant Queen #1 is pure sci-fi adventure to the core that is without a doubt going to become a classic. It immediately drops the reader into an exciting world that begs to be explored and runs them through it at a fun pace. Visaggio and her creative team are producing comic book gold that is easy to fall in love with.