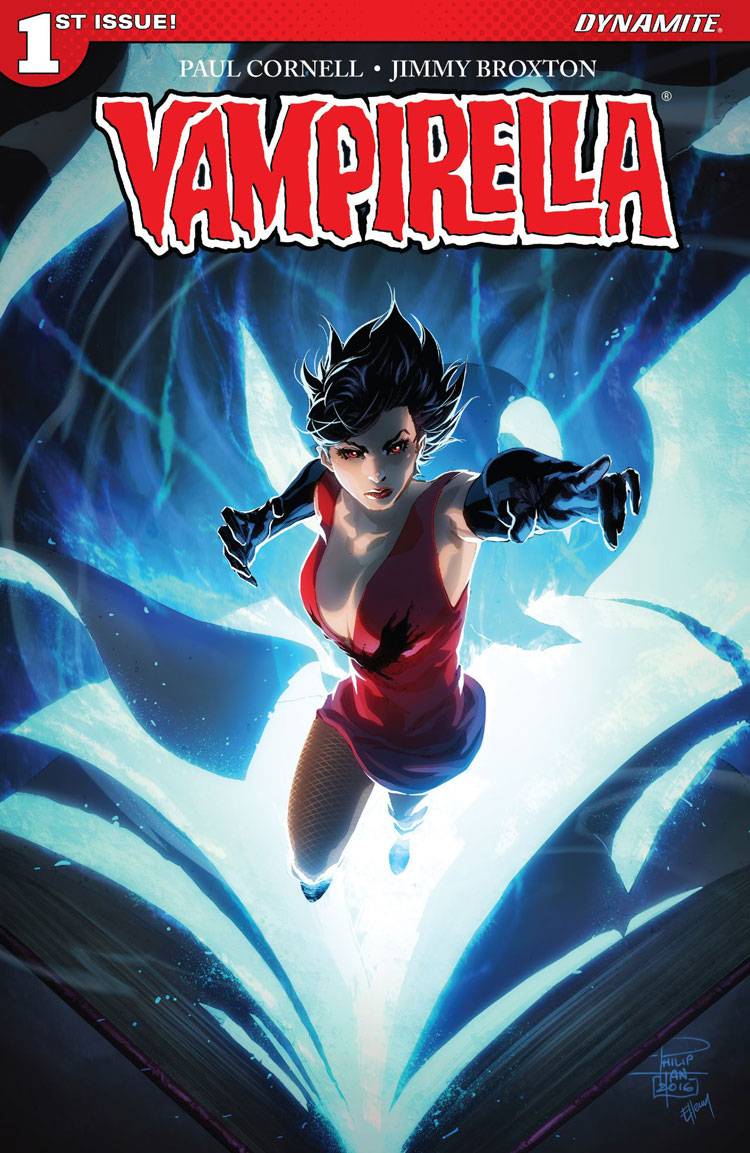 As improbable as it may sound, it seems like the most difficult — nigh unsolvable — riddle in comics is a space vampire who cavorts around in a bathing suit.

A year and two weeks ago, I was reviewing the first entry in what was being marketed as a bold new direction for Vampirella seeking a whole new audience. And here we are with yet another reboot that throws absolutely everything from the last iteration out the window.

Even so, it started a dialogue that could have been nurtured and sustained if Dynamite was committed to pursuing it. As Kelly Richards put it: “Now that I’m in I can’t get enough. I love Vampirella. I love her hot werewolf boyfriend. I love her sassy butler. Frankly, I’m a little offended that I’ve had to wait until now to jump on the Vampirella bandwagon.”

The tragic irony is that a year later, it’s difficult to discern exactly who Paul Cornell and Jimmy Broxton are intending to appeal to.

The premise is simple enough: Vampirella went into a long hibernation and emerged to find a Los Angeles fallen into the dystopian end stages of capitalist patriarchy as Cornell and Broxton envision it. The goal in constructing this dystopia appears to be to conceive of one that both confounds Vampirella’s aesthetics and offends her sensibilities, which is quite possibly how the comic fails so completely given how confused those aspects of the character frequently are.

Marguerite Bennett and Aneke’s tenure on Red Sonja began with a somewhat similar premise to Vampirella, portraying Sonja returning home to find that every problem she took it upon herself had been solved by the new regime. Every outlet for her violence had been systematically plugged, leaving her feeling thwarted and unsure of her place in the world. From that perspective, an alternate version of this Vampirella story can easily be discerned in which her enthusiasm at an openly sexual culture is progressively dampened when she discovers that her appetites are sneered at and the sexual mores of this seemingly libertine society are fundamentally cruel and repugnant to her.

But making a sexy vampire put on more clothes and behave indifferently towards sex purely out of a commitment to aesthetics isn’t all that interesting or progressive.

The other side of it is that this self same dystopia has seemingly exterminated all but the richest and whitest. “Why is everyone so white?” Vampirella asks in a thought bubble, followed by “I speak as someone who is, themselves, very white,” as a caption. All of this is clearly intended as satire, given that Cornell and Broxton’s dystopian LA is more or less a hyper eroticized, phallus obsessed riff on Judge Dredd’s Megacity One.

There just isn’t much of any kind of value in this kind of attempt at satire, which has already been repeatedly mined by the likes of The Flintstones‘ riffing on the genocide of indigenous peoples and even Moore and Lloyd’s projection of a post genocide England in V for Vendetta. There’s a rueful chuckle available at the fact that Vampirella’s observation on the lack of people of color, the poor, or visibly disabled could be applied to an overwhelming swath of what’s on comics stands but it doesn’t change the fact that we’re looking at exactly the same thing it’s intending to criticize.

When Cornell introduced Faiza Hussain as the wielder of Excalibur, that was genuine subversion that offered a way forward. This is just being cute about being lazy.

Where the issue well and truly tumbles into a ravine too deep to claw its way back out of is how it entwines the sexual politics of its dystopia with the white supremacist and ableist aspects. It’s abundantly clear that this is meant to be a morally repugnant place, made obvious by demands that Vampirella be sexually available on demand in public, resulting in her being groped without consent, which she responds to passively. The major oversight in their worldbuilding is to more or less conflate the idea of a sexually permissive culture with one that is deeply hegemonic and enforces a predatory, coercive sexuality on the population.

Covering everything in phalluses to project a violent patriarchal sexuality is cheap and counterproductive, especially when the semiotics extend to suggest that women wearing strap-ons are assimilating into the dominant culture. To suggest that this kind of symbolism veers into outright transmisogynist rhetoric is hardly out of line, given that Cornell has already issued an apology for approving clearly (and unchallenged) transmisogynist text on a cover for the series.

Tying the phallus explicitly to violent patriarchal sexuality and visually coding kink as hegemonic and degraded isn’t novel or satirical. It simply further entrenches the regressive sexual politics that dominate the industry and continues to mischaracterize how and where sexual violence proliferates.

This Vampirella presents a vision of predatory sexuality that is still deeply mired in aesthetics and linguistic tics cribbed almost directly from A Clockwork Orange when most thoughtful and compelling portrayals in contemporary media have moved on to distinctly Ballardian portrayals of how power and privilege breed entitlement and exploitation. While sexual violence absolutely does occur at street level, manufacturing a gang of droogs as the face of a sexually violent culture in contrast to the reality of racist fairytales of mass sexual assaults and very real allegations that plague offices everywhere from major comic book publishers and national broadcasters to the Oval Office feels incredibly out of touch.

Just like Vampirella’s observation that only the richest, whitest, and healthiest have survived, there’s no real path forward being charted. Certainly Vampirella is being presented as a disruptive figure, but there’s not much to gain in a self described “very white” protagonist disrupting white supremacy or even disrupting sexual mores that are already deeply confused and problematized.

The creators’ work here appears deeply out of its depth on the topics and themes they try to present, which is difficult to muster up any sympathy for in an era where the frontiers of eroticism in mainstream comics are being reconfigured in real time by the likes of Clean Room, Sex Criminals, Sunstone, Multiple Warheads, and Harley Quinn.