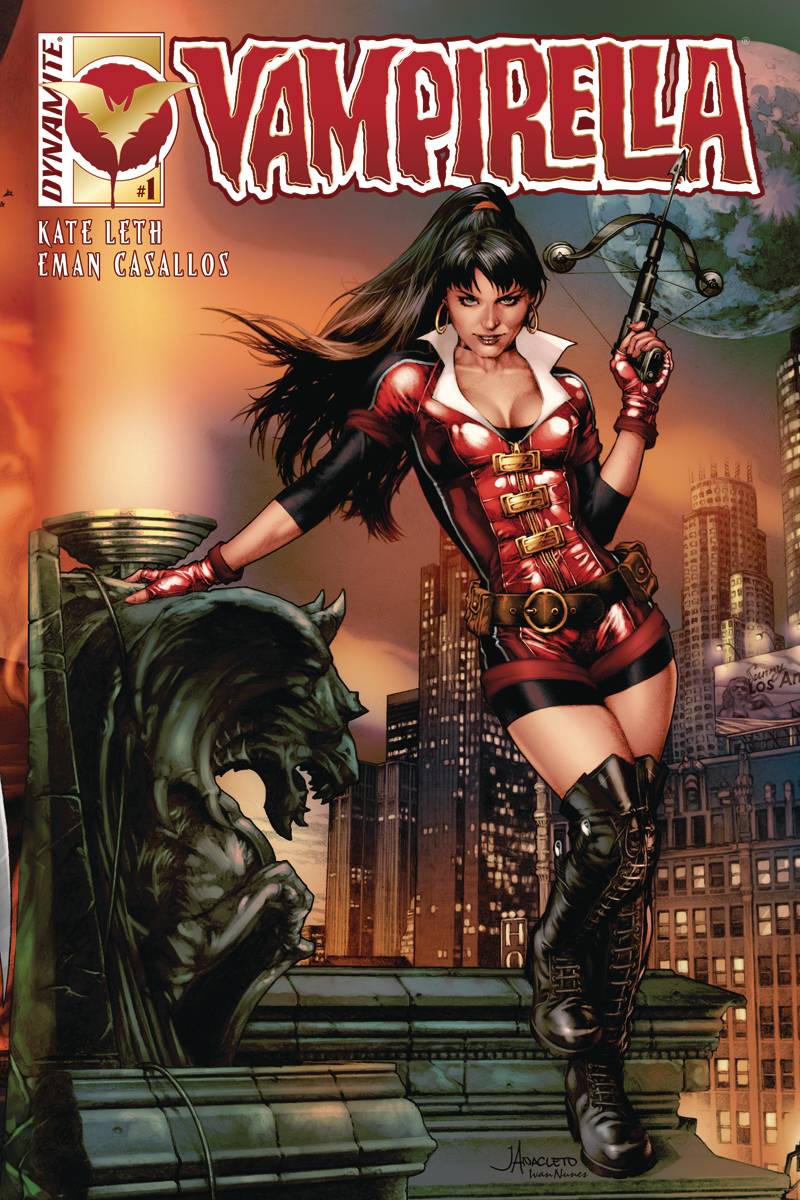 For the debut of its bold new direction, Vampirella tackles her two oldest foes: sunshine and clothes.

What’s truly hilarious about the situation is that Leth and artist Eman Casallos project at least some fondness for the old costume in the debut issue, bringing it along in Vampirella’s move to LA. They present it, as Vampi models it for her werewolf boyfriend Tristan, as lingerie: fun for the bedroom and unsuitable for much else. To wit, she pursues a late night attacker out into her yard, resulting in a wave of unwanted attention when photos of the incident hit social media.

While I’m still not sold on the idea that Red Sonja needed a new costume — just stricter control over just how far her top and loincloth ought to be allowed to shrink — Vampirella desperately needed one. Leth and Casallos’ use of it this issue reminds us that the suspender thong will definitely be around in some way, shape, or form, likely in future variant covers or non-comic merchandise like statues, posters, and calendars. Which is fine.

Ironically, the current team makes a very strong argument for how the old costume can be used effectively in the segment it appears. Vampi’s affection for it is presented intelligently and the art is very careful in deciding what angles we see it from. When she turns to face her attacker smashing through the bedroom window, the panel cuts just below where the suit tapers into a thong, teasing at how much Vampi butt is on display without being flagrant about it. The commentary around it is — pardon the pun — cheeky and good natured, showing a comment thread beside the photos that includes a female commenter chiding her husband for not logging out of their shared computer after ogling vampire butt. There’s a big and exciting world of sex and fetish that goes far beyond the apparently widely held belief that strippers don’t change out of their costumes after a shift, and until now, Vampirella has been of the few places left in comics that had yet to catch up to that fact. It could be that the suspender thong was being vociferously defended because of the recognition that in most other mediums female creators rule the roost in urban fantasy.

That’s the obvious avenue for growth for the character and the genre as a whole. Pursuing a crowd stuck on the same old outfit drawn to the same old specifications in boilerplate stories is a great recipe for diminishing returns. Women are voracious creators and consumers of urban fantasy, but as is easily demonstrated by prose novelists like Kelly Armstrong and Laurel K. Hamilton, they bring far more varied and imaginative sexual appetites with them.

That there’s a segment of male readers who feel upset and alienated by seeing things like female characters naming the abs and butt cheeks of male heroes, doesn’t demonstrate much more their entitlement and lack of imagination. I have no interest in men whatsoever, but thanks to broadening imaginations at Marvel, there’s solidarity to be felt in naming Thor’s abs because there’s a whole sky full of constellations to draw from when contemplating Carol Danvers’. Just like Marguerite Bennett’s Red Sonja, and Gail Simone’s earlier conception, Leth’s Vampirella has a robust sexual appetite of her own, as depicted by her relationship with her werewolf boyfriend. There will be sex for everyone and it will be smarter, more inclusive, and more sensual than before. It’s a win for everyone who can see past their own noses.

But just as Dynamite has been pursuing a bold new agenda by handing their portfolio of exploitation characters over to a panoply of female writers since the gigantic Swords of Sorrow crossover, they’ve been equally dragging their feet on breaking old habits in the art department. Aneke works very well for Red Sonja as she knows the lay of the land when it comes to fantasy worlds and can pick up smoothly from Marguerite Sauvage’s covers, but there’s a lot of dissonance in Vampirella for new readers. Casallos works very effectively with Leth to present a singular vision that pulls the title away from crass exploitation into a more playful and sensual vibe, but the positioning of the title and the fanbase that Leth brings with her clash fiercely with the Dynamite house style.

The style Casallos employs here is worlds away from not just Leth’s own cartooning, but the strong continuity of playful, kinetic artists she shares the page with elsewhere (Arielle Jovellanos, Ian McGinty, and Brittney Williams). It’s also a far cry from the cover artists joining them on Vampirella like Chrissie Zullo and Tula Lotay, who bring a strong dose of whimsy along with them. Casallos’ work is fantastic at capturing the emotional beats of the characters and bringing out fun little highlights like the pattern of Vs on Vampi’s luggage parodying Louis Vuitton’s branding, but there’s a conservatism in both it and Valentina Pinto’s colors that fly in the face of the spirit of the comic. Dynamite has been making constant strides in making their properties more appealing and engaging, but they still have a lot to learn about taking chances artistically the way that IDW has with the Star Trek and Jem and the Holograms.

Vampirella’s debut is a strong statement of intent that is already much smarter and sexier than anything done with the character in recent memory.