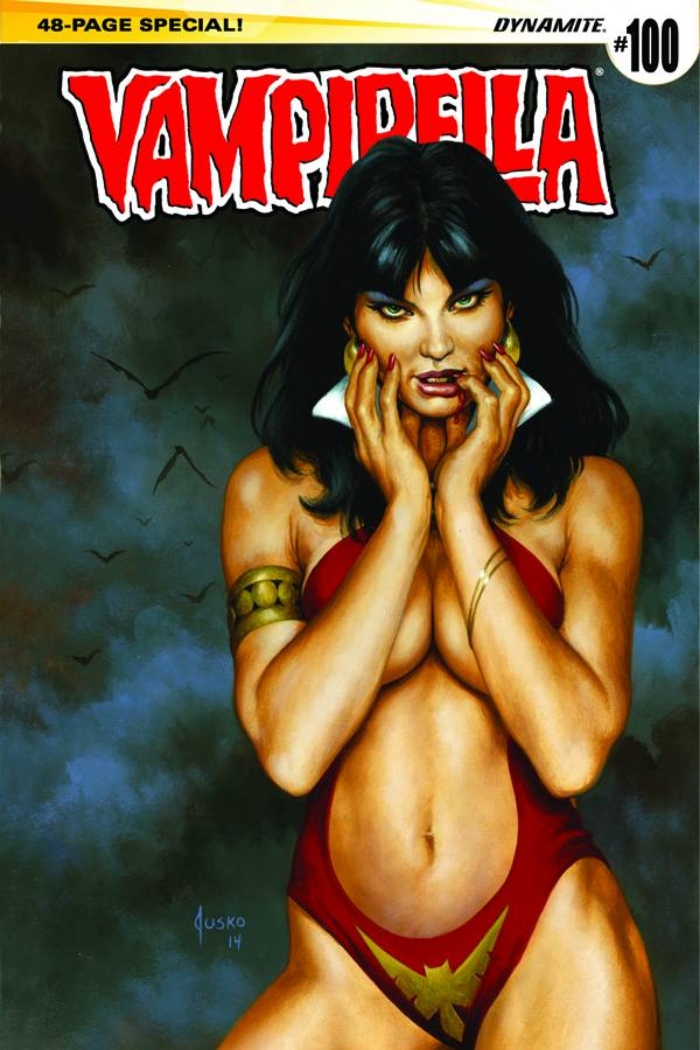 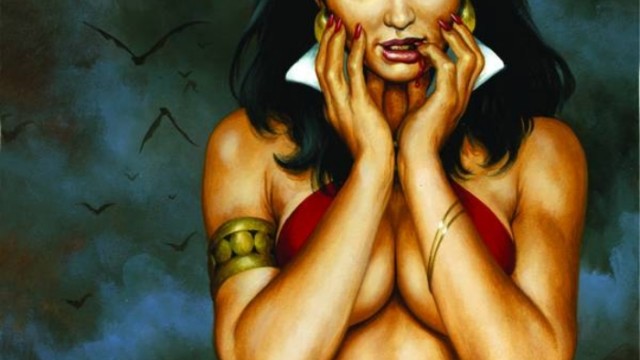 Vampirella, honey, we need to talk.

Here’s the thing. I applaud you for reaching 100 issues. Very few comics today have or ever will again. You’ve been an icon of the medium for 45 years, and I’m pretty sure you populated the dreams of many a teenage boy in that time, even if I wasn’t one of them.

But you’re experiencing an identity crisis and it’s not working for you.

The thing is, for an anniversary issue as is presented here, there’s relatively little of Vampirella in action (and I’m not just talking about her clothes — although now that you mention it…). I will admit, I am not a regular reader of the title, having picked up this issue on a dare of sorts. But I have a lot of respect for the legacy that a character like Vampirella has to live up to, and grow beyond, in order to succeed in 2015.

I get the sense — if this compilation of five short stories is a healthy sampling of what the monthly title provides — that there’s a real effort happening on the part of modern day creators to de-objectify a character who has at times been nothing more than a Fangoria version of Bettie Page. Great! But in the process, Vampirella has lost everything that makes her sexy, and these two goals are not incompatible.

To wit, the opening story by writer Tim Seeley and artist Jim Terry is right on in its attempt to illustrate Vampirella as powerful, but sexy vampire from a distant planet. This is pure 1970s B-movie stuff of legend, rolled out onto the comic page. It feels neither exploitative nor stagnant, and references Vampirella’s origin with a fun, black and white action sequence. There’s motorcycles and weird alien punk rockers and scenery that could be straight out of Logan’s Run. It’s about as close to period perfection for a character like Vampirella as you can get.

Unfortunately, the quality of representation slides from there, moving from story to story where either Vampirella has nothing much to do beside stand around as a bystander in her own book, or she becomes increasingly more and more a flaunting object of the male gaze. Or both.

The story by Brandon Jerwa, wherein Vampirella investigates and interrogates a series of corpses in order to discover the truth behind a mass murder is absolutely fascinating — and absolutely marred by Gabriel Mayorga’s treatment of her body language and dress. Why juxtapose a police-like procedural story set in a breezy, dark cemetery with two pieces of tape, rolled back eyes, and more hip thrusts than I can count? It doesn’t make sense for the narrative, and frankly, it doesn’t do right by the character. Her competence is overshadowed by becoming a piece of meat. And this pattern repeats itself in other stories (but perhaps with less successful narratives).

The reality is, there’s a million ways to make a powerful female character sexy, or even sexual, without making her into an object, but I’m not sure the bulk of these creators are getting that. Vampirella grew out of an era of storytelling that embraced female sexuality, often in really interesting powerful ways. One only has to look to Barbarella or Rocky Horror Picture Show to imagine how much stronger a character she could be if given a chance. And THAT would be something to celebrate.