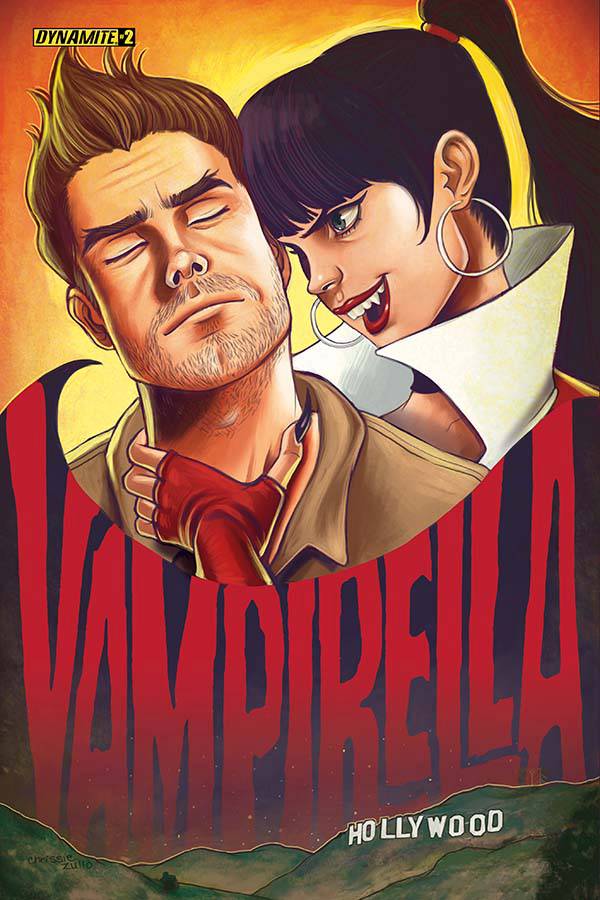 I will hold my hands up and say prior to the announcement of Vampirella’s current creative team I had less than zero interest in the book. Don’t get me wrong, I love vampires, bad ass ladies and boobs, but that costume has always stood as a red flag for me. It practically screams no girls allowed. Thanks to Kate Leth, Eman Casallos, and Valentina Pinto and a snazzy new design, this is no longer the case and I’m really glad I picked it up because Vampirella is so more than just a terrible outfit. Chances are she always has been but I’ve never felt like the Vampirella fandom was a clubhouse in which I was welcome. Now that I’m in I can’t get enough. I love Vampirella. I love her hot werewolf boyfriend. I love her sassy butler. Frankly, I’m a little offended that I’ve had to wait until now to jump on the Vampirella bandwagon.

While not dissimilar in style to Leth’s previous work, it is a definite departure from titles such as Power Up and Hellcat. By mixing campy horror with a somewhat self-aware brand of humor Kate Leth has taken Vampirella and wrapped her up in a bow to present back to a generation of girls raised on Buffy The Vampire Slayer and Tim Burton movies. The dialogue in particular stands out as it reads remarkably close to speech, at least with regards to the way that my friends and I speak, and when the majority of the books you read are written by middle aged men, this is both something of an anomaly and enough to make you smile. And don’t think I missed that not so thinly veiled reference to Hamilton. I see you, we are all Hamiltrash here. The dynamic between Vampi and Juliette is especially interesting as they negotiate how much they can and are willing to tell the other while trying to retain a sense of authority. It mimics the relationship that Vampi currently has with the world as she tries to balance her burgeoning public persona with her private life.

Like Leth’s sharp scripting, Eman Casallos’ artwork brings a new layer to Vampirella by solidifying a more contemporary aesthetic. While Casallos does not shy away from cheesecake, it is clear that he draws them with a consideration of the intended audience. For example, in the scenes where Vampirella is once again found in her classic costume, she is wearing it, it is not wearing her. Valentina Pinto’s colours allow the book to retain a sense of realism while remaining eye catching and thematically relevant. The heavy blacks and rich reds that can be found in Vampirella’s costumes punctuate the book and give the story a gothic edge without going overboard.

Vampirella does more than appeal to the teenaged 90’s goth that resides within my soul, it appeals to the grown up that wears my body and pays bills and stuff. It’s not only fun and relevant but it takes something that I, and others, have previously found intimidating and made it accessible to newcomers and women, alike. Its one more step in the right direction and I am excited to see where this step takes us.