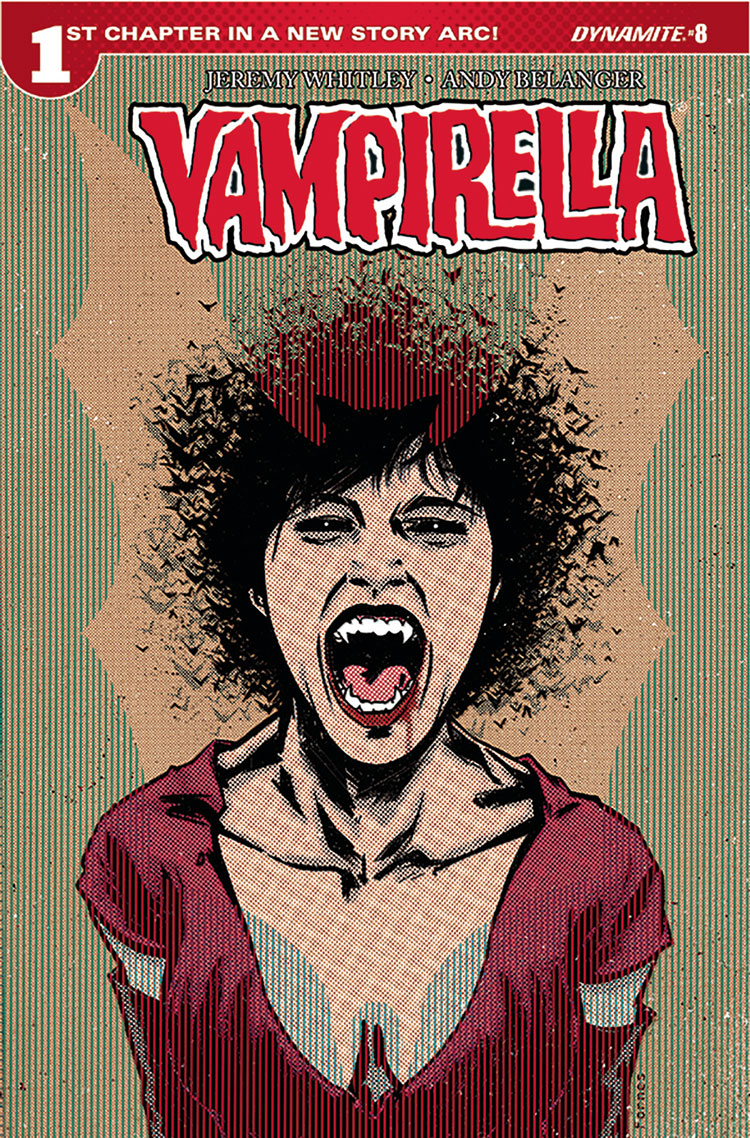 It’s Mad Max meets The L Word as Vampirella — awake in a desolate world 1,000 years in the future — fights zombie bikers alongside her maybe-kind-of-hopefully girlfriend Vicki, who just might be a zombie herself.

Here’s a little secret about me: I really want to love Vampirella.

No idea why. Truly. There’s just something about the character that draws me back over and over, trying out the book every time there’s a creative team change.

I’m not even kidding when I say that this issue — Whitley and Belanger’s first full issue — might be my fourth or fifth try at falling in love with the vampire queen from Draculon. She’s starting to become like the Goldilocks of my comic habit: one run is too tame. Another is too flat. One run is seemingly drawn to extract the drool of a million fanboys. Another is blacking out hundreds of dicks, in what seems like the weirdest of mixed messages I’ve ever encountered in a comic.

And this one… this one is interesting.

I can’t say what Whitley and Belanger have laid out with their inaugural issue is what I expected. Gone is the double red rubber band bathing suit, traded in for a kickass leather jacket, some sensible tights, and an oversized off-the-shoulder tee. (And thank God for that, really.) But also gone is the sense of seduction that characteristically manifests in most female vampire stories.

In its place is a woman exploring something she’s seemingly not experienced in her immortal life to date — falling for a girl who isn’t falling all over her. It’s a dynamic Whitley devises that must fuck with the head of a classic seductress, and I’m kind of here for that awkward college sophomore romance amid ripping off jaws and pulling chains through the backs of zombie skulls.

Yeah, there’s no shortage of gross-out, but Belanger renders a fairly clean narrative throughout the issue, partly from maintaining a strict panel structure and partly through his use of crisp, deliberate line. In some places, it leaves both Vampirella (Ellie) and Vicki seeming a little more severe than I’d expect.

But at the same time, I’m kind of grooving on a butcher aesthetic for Ellie especially, as she internally processes her queer puppy love. Between Belanger’s lines and Whitley’s internal monologue, I get this real back and forth between world-weariness and a “I don’t know what to do with myself” anxiousness that’s pretty endearing, although at times makes some of the out loud dialogue seem a little heavy-handed, cutesy nicknames and all.

What’s absolutely certain is that once again, colorist Lee Loughridge delivers on a limited color palette to absolute perfection. Similar to his work on Black Canary, but with much more muted, earthy and desert tones, Loughridge is shifting environments almost entirely through the use of subtle color progressions. The expertise on display here is worth the price of admission alone.

Vampirella #8 may not be everyone’s cup of tea, especially those expecting a sexy mistress of the evening to grace each page boobs first. There’s no question that this isn’t that book. I almost wonder if this is a Vampirella book at all, as the feel of it diverges so strongly from my experience of the character.

But it is a book I’m interested in reading, a story that makes me chuckle at its gross bits more than once (although for the love of God, Dynamite. Who do you think is reading this book that you need to black out the swear words?), and gives me a developing relationship between two women that turns the table on my expectations immediately. That’s a pretty cool thing all by itself.