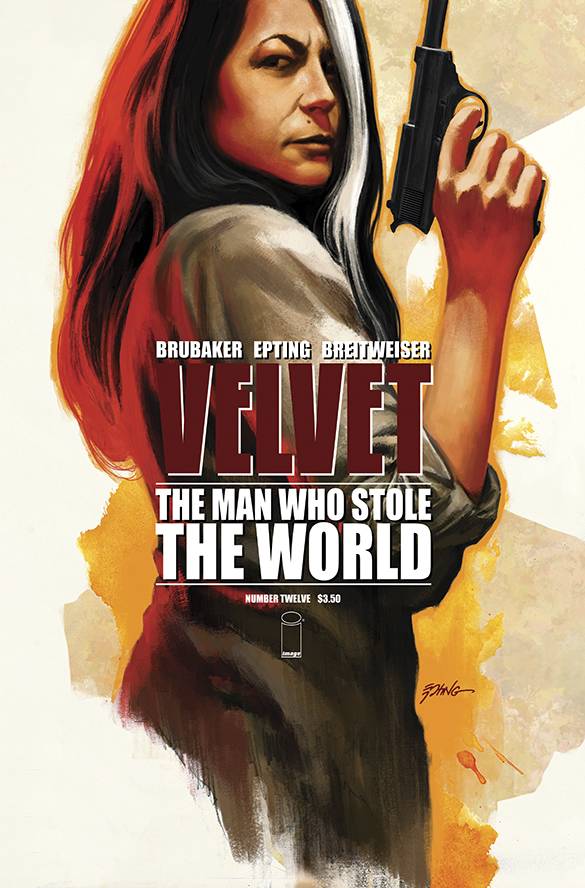 Velvet’s secrets have secrets as she operates in multiple layers of deception in the newest issue of Velvet by the all-star team of Ed Brubaker, Steve Epting and Elizabeth Breitweiser.

Damian Lake is still at large, every agency on the planet is trying to get Velvet (and/or Damian) and Max is attempting to work against Velvet while acting as her ally. Velvet knows she’s being played, and is in turn playing Max to her advantage. Just another day for an international super spy, right? What impresses me the most about Ed Brubaker’s writing is that Velvet’s life at the moment is so twisted and layered in secrets upon secrets that it is arguably laughable, but his writing is so damn good that it works. The constant twists and turns and back and forth of who is playing who is as entertaining as can be and with each issue Brubaker is committing further that this is a true spy book. This isn’t an adventure with spies in it – this is a true spy comic and Velvet is the best damn spy there is.

Despite her life being utter mayhem, Brubaker never diminishes Velvet’s strength. Thus far, Velvet really only has one equal (the demented Damian Lake) and much of this issue is the pure entertainment of watching Velvet make others look like fools. Her dialogue is fantastic and the pacing of this issue, while not the fastest yet by any means, fits the speed of this spy book so well I can’t really complain. Brubaker and Epting build tension so well and there are so many layers of duplicity in play that even simple conversations are filled with tension and dread as we never know when/if Velvet’s plans are going to crumble down all around her. Within these pages is the basis for the greatest spy movie I’ve ever seen and reading it in this medium is just a pleasure.

Ed Brubaker’s words & script are great, but his art team is every bit his equal. Steve Epting and Elizabeth Breitweiser put on a clinic in storytelling whenever a new issue of Velvet comes out. Velvet is a graceful character who is tough as nails and operates perpetually in the shadows, which these artists use to their advantage so very well. Every scene in a hotel bedroom is constantly scattered in shadow to represent the layers of deception Velvet is constantly using and when the action scenes cut in they are powerful and intense. Simple looks and glances from characters have immense power and as this series progresses this team somehow gets stronger. Breitweiser’s colours enrich and enhance Epting’s pencils and this duo is easily one of my favourite artist/colourist teams in the business. Their visuals set the tone for the “secrets within secrets” vibe that plays out through the entire issue and the final pages are fantastic.

Velvet #12 is another fantastic issue in what has been an amazing series thus far. Brubaker, Epting and Breitweiser are skilled storytellers who are unfolding a spy masterpiece before us. I’m fine with the release schedule when the result is this damn good.