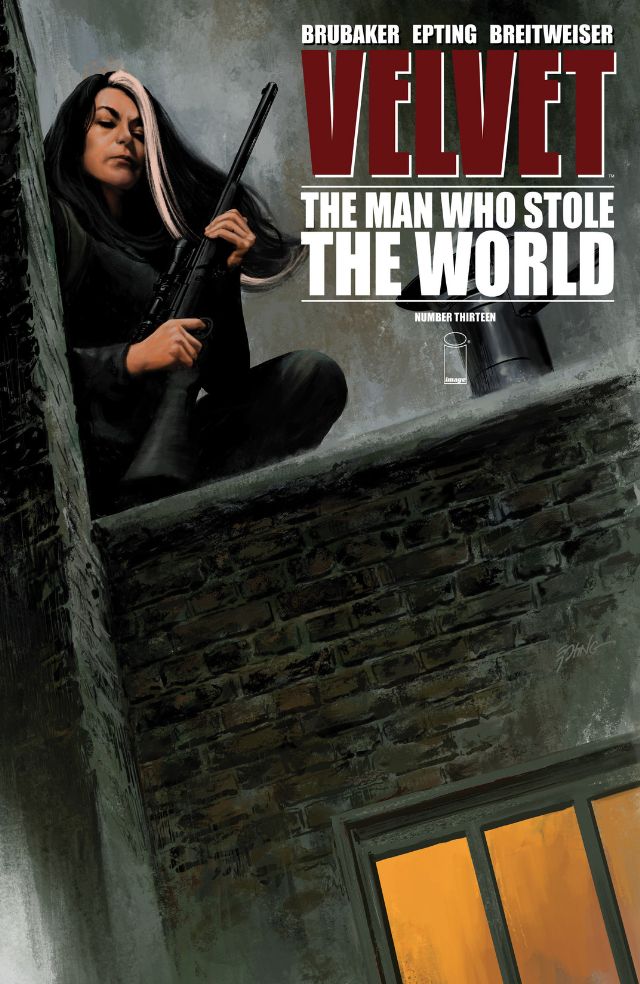 We return to the scene of a restaurant filled with deadly spies, already in progress…

I’m gonna say it right off the bat and get it out of my system: the release schedule of this comic is a damn shame because this is a brilliant spy tale from Brubaker, Epting and Breitweiser.

Brubaker is taking readers through twists, turns and on high speed car chases with this series and I am loving every second of it. This is a classic spy story with the best elements of James Bond being fused with a Black Widow-esque kickass lead, and Brubaker knows how to make this story work. Quite a bit goes down in this issue, with Velvet coming face to face with Damian Lake. He’s a deadly one and we know very little about him, which makes him a great foil for Velvet. Brubaker writes the banter between the two very well, leaving readers completely in the dark as to what this guy is up to, but that there is absolutely no question he’s a dangerous cat. That’s where Velvet is insanely better than your run-of-the-mill-same-era Bond film: her villains aren’t larger than life or comical – they are deadly people playing a high stakes, vicious game and there are consequences. Brubaker shows that well with this issue and, as is the case with each issue of Velvet, the story goes places I didn’t expect…which is the best part.

Steve Epting and Elizabeth Breitweiser are as good as art teams get. I fully embrace my broken record status with respect to singing their praises, but they are just so damn good at their craft. Epting’s pencils are on point through the entirety of the issue, and this comic is just damn well done. This one is action heavy, which Epting and Breitweiser handle without issue, keeping the same great style and aesthetic they’ve built up to this point. This is one of the best looking comics on the market, and you know when there’s a new issue of Velvet coming, it’s going to look great.

Velvet #13 is a well crafted, entertaining comic. This series continues to be the best spy book you’ll find in the market, and Brubaker/Epting/Breitweiser are the kind of team who just can’t miss.