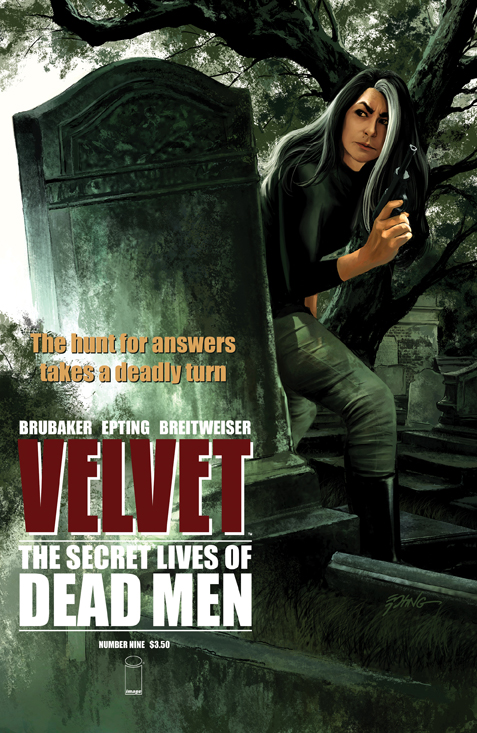 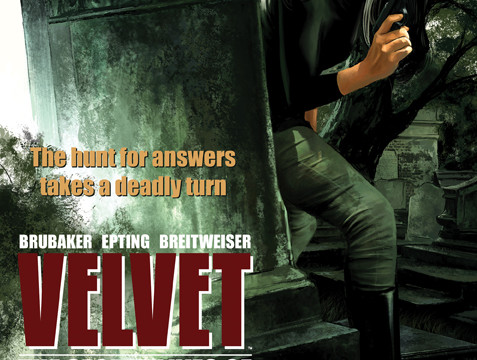 After a brief break, Velvet returns and while she may have sprung a key informant out, can she trust him?

Ed Brubaker writes this spy genre very well. He crafts twists and turns in ways that do not feel forced, and with each issue it seems like the world of Velvet is being turned further upside down. The mystery of why she is being targeted is no closer to being solved, and Velvet herself is probably in more danger than she ever has been….but the story is also better than ever. Brubaker writes the banter between Velvet and Damian very well, with both showing their prowess at “the game”. Damian is an interesting addition to the mix, adding in a wild card that is as dangerous as Velvet and potentially more cunning. Even after this issue we still know very little about this character, but his ties to Velvet’s situation are obvious and it is definite that he will become an important player down the line. This comic is the best James Bond story you’ve never read, and Velvet is the most entertaining spy in entertainment today.

Steve Epting and Elizabeth Breitweiser set the visual tone for the book in an outstanding way, delivering quality work from start to finish. Epting’s pencils are consistent and rock solid and the world of Velvet has been visually impressive since the first page of issue #1. His style is perfect for this spy story and he pencils deception very well. With Damian in particular, Epting pencils him in such a way that you cannot get a read on if he is telling the truth or not. These looks that lie in the gray area of honesty are not easy to convey, but Epting makes it seem effortless. Colourist Elizabeth Breitweiser’s work is fantastic and takes Epting’s pencils and makes them soar. Her work is masterful and gives Velvet the perfect Bond/spy feel by evoking the time period of this comic very well. Velvet has a ton of style and Breitweiser’s work is a critical piece of that. She and Epting are one of those 1-2 punches that can’t fail and we.

Brubaker, Epting and Breitweiser deliver another great chapter with Velvet #9. The Secret Lives of Dead Men is a rock solid arc so far and this chapter has enriched this story even more. This creative team is as good as it gets and anyone who even mildly enjoys the spy genre needs to read Velvet. Its unpredictable plot twists, strong characters and great storytelling from 3 masters of the craft make this title a sure fire winner every month.