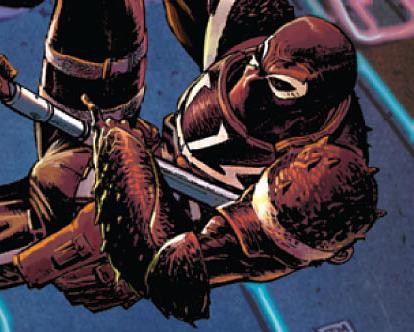 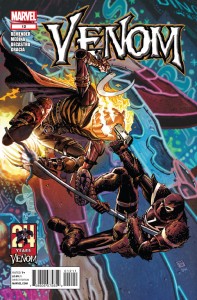 Rick Remender has been putting Flash Thompson through the ringer since this series began, and boy, is it only getting worse. In this issue we get to see the effects of Flash being on the run and bonded to the symbiote for far too long, as it starts to really destroy his life and the storyline starts to twist in some rather unexpected ways. Remender has an excellent handle on what makes Flash Thompson who he is: his demons, his past, his family and everything that can go wrong when you attach a sadistic alien symbiote to someone who teeters on the edge of control as it is. This is an action packed series, and this issue does not disappoint, sending Venom into some crazy scenarios and rampaging through Las Vegas in a crazy action sequence worthy of the big screen. Throughout the mayhem, though, Remender keeps this a personal tale of struggle – against the symbiote, against the demons, against Venom’s new handlers….Flash is torn a lot of different directions and Remender’s script evokes that feeling very well. This is another solid issue in what has been a very entertaining series.

Lan Medina provides some really solid pencils in this issue, even better than his last. His Venom is terrifying, ferocious and maniacal and his characterization of Flash is someone who really has hit rock bottom. Medina pencils both the chaos and calm in this issue well, with the quiet moments more impacting than some of rampage that takes place in Vegas. In the end, a very solid artistic effort.

Cons: Issue feels like somewhat of a lead-in to the Venom-centric event coming up and the Red Hulk tease from the last issue didn’t really lead to anything here. That said, I’ll be patient.