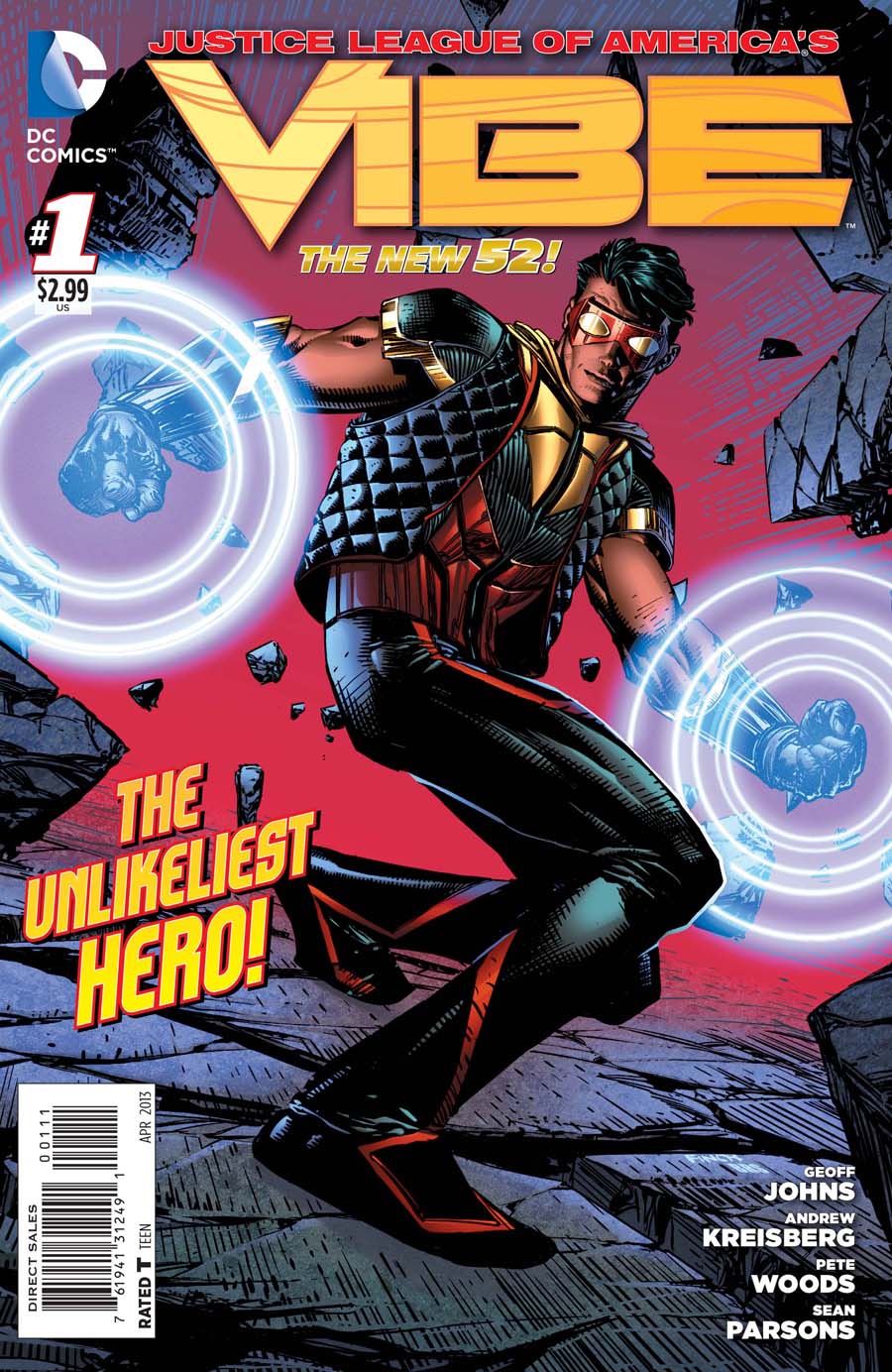 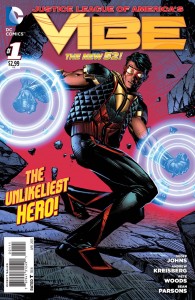 In theory, launching a book starring Vibe, one of the most Z-list Justice League members ever, is a terrible idea. In a market that has trouble supporting titles without an X or a Bat behind their masthead, reintroducing one of the most stereotypical hero creations of all time couldn’t be dumber.

Except it turns out that it’s great.

Unlikeliest hero (as the cover exclaims) indeed, as Vibe joins Aquaman (his once and perhaps future King) as the latest revitalizations helmed by Geoff Johns of characters once relegated to the sidelines. Gone is the Spanish slang, breakdancing, and neck bandana (Oy.) — and in their place is a young eighteen year-old hero, responsible and likeable, who’s about to embark on the most exciting adventure of his life, providing he doesn’t get out of line. Recruited by Agent Dale Gunn to join A.R.G.U.S. and the brand new Justice League of America, Francisco Ramon is the survivor of Darkseid’s great incursion into our universe five years ago, just prior to the birth of the Justice League. Caught in the epicenter of the very first Boom Tube arrival of Parademon forces, Cisco watched as his older brother Armando became the first casualty of thousands, mere days before he would become the first in his family to attend college. But that event also gave Cisco powers he managed to keep secret for years — that is, until now.

Johns and Kreisberg craft a fantastic first issue that introduces a new positive character to the New 52, who brings both diversity and, frankly, a lighter tone to the universe. Cisco isn’t a brooding teenager, but a Peter Parker type hero that DC seems to be having trouble visualizing lately — someone who’s ready to do the right thing because it’s right, not just because his brother was killed or the government wants him to. Not that the government intrigue the writers are fostering behind Vibe’s recruitment isn’t fascinating. With the double page spread first appearance of The Circus, fans are going to be chattering for days at the possibilities behind this book and the ramifications of what’s being housed there, not the least of which is a mysterious young girl…

Pete Woods delivers a very successful series of pages here, depicting a Cisco who looks his age and exudes enough energy and charisma to keep the reader focused on him. His facial expressions run the entire gamut and manage to keep several pages of talking in plainclothes interesting and brisk. Woods’ action scenes are exceptional, the vibrational energy seeming to pour right off of the main character, particularly in his confrontation with the rogue Parademon. The only place the artist seems to fall a bit short is on a single full page image of Vibe in costume, surrounded by his Justice League colleagues, where his otherwise tight line and crisp detail feels a bit cartoony. There appears to be a lot of love put into this comic page after page, however, and it only adds to my enthusiasm for the character going forward, in and out of costume.

An unlikely hit, but critical book to read if you are a fan of the greater DC Universe, I strongly recommend giving this book a try. Ignore the naysayers and those that question Vibe’s place on the racks. This title promises to stand out — in a good way — if given the chance. But don’t support it because Vibe’s Puerto Rican, or a new(-ish) character, or simply not-Batman. Well, you can if you want, but I’d say, give Vibe a shot because it’s a damn good comic book, and the kind of character we don’t see in comics as much as we say we’d like to — an actual good guy.