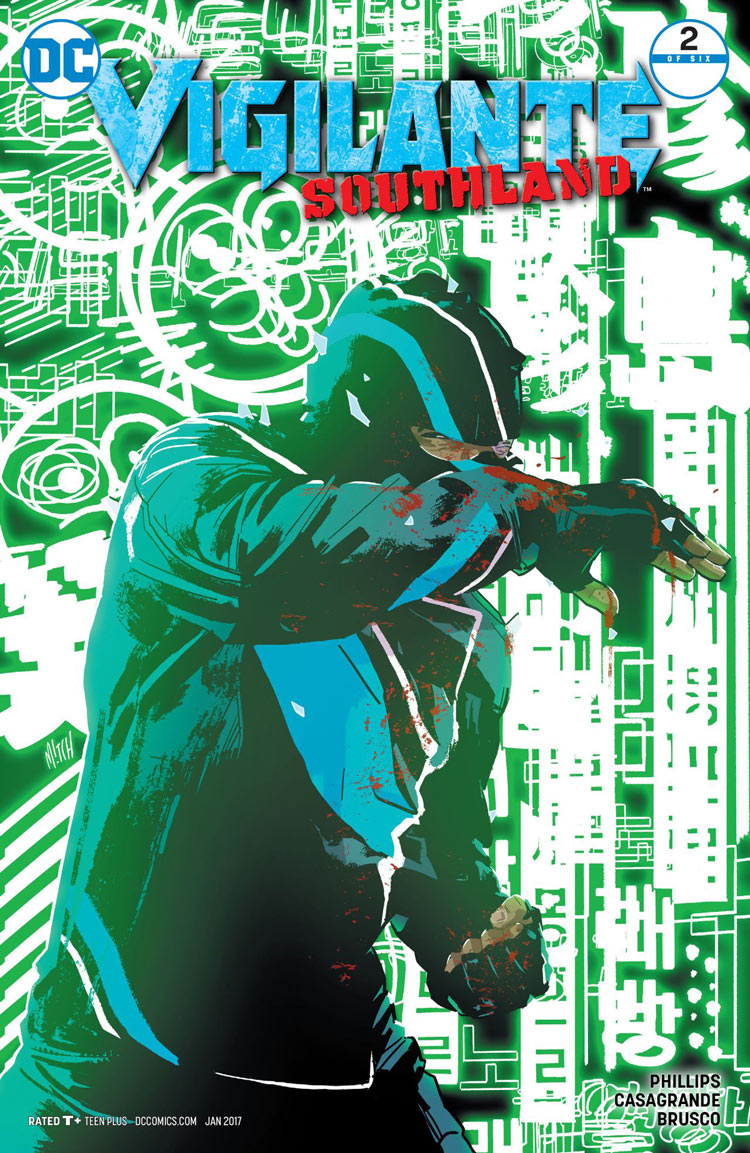 The origin of the new age Vigilante has been rough to say the least. Death, secrets, and an explosion of your once normal life can leave you in a worse for wear state. That doesn’t stop Donny from starting his journey of revenge and training to be a hero in his own right.

The second issue of this mini-series moves both the characters and plots at a steady pace providing a mystery of just what exactly Dorrie was involved in before she died. The past and present collide when we’re introduced to Mike as “The Eastrider” that protected the streets twenty years ago.

Phillips gives everyone in the main cast spotlight to a certain degree, whether they’re proactively helping Donny in helping him become a self-sufficient hero or their searching for clues in their own right and by their own means. We’re taken across many sections of Southland big and small and the colors are put to fantastic use in each location.

The first leg of Donny’s journey takes him to Koreatown and it features one heck of a close quarters combo against a dominatrix. Yes, it actually happens and it’s a realistic fight that puts into perspective what kind of world Philips has crafted in two issues. Vigilante fits right at home with the more grounded heroes of the DCU and existing on the fringes of the larger universe in a city we don’t normally visit or see at all helps strengthen Vigilante’s identity and character. Donny as a character is brash, tough, and courageous. He’s still learning about how to navigate this world of subterfuge and high stakes politics that could result in his demise.

Casagrande and Brusco do wonders for Phillips and his writing. The inks and colors across the board heighten the story and environment, with the Vigilante suit itself standing out with it’s black and blues against other vibrant colors across the board and in the dark. The attention to detail with characters and specifics about them or highlighted and helps them become more fleshed out and defined.

Body language and movements play a big part in how events play out and panel space is used to provide variety to what’s going on inside the pages. The art team deliver in setting up and stylizing this world of crime, grittiness, and realism.

Characters all move of their own accord either by their own doing or another force at play and it pushes the surprising developments forward to the halfway point that will be issue #3 next month. Vigilante: Southland is ramping up the action and the titular character slowly rising to the action despite the past coming back to haunt him in a way that’s all to familiar to heroes of the same cloth as him.