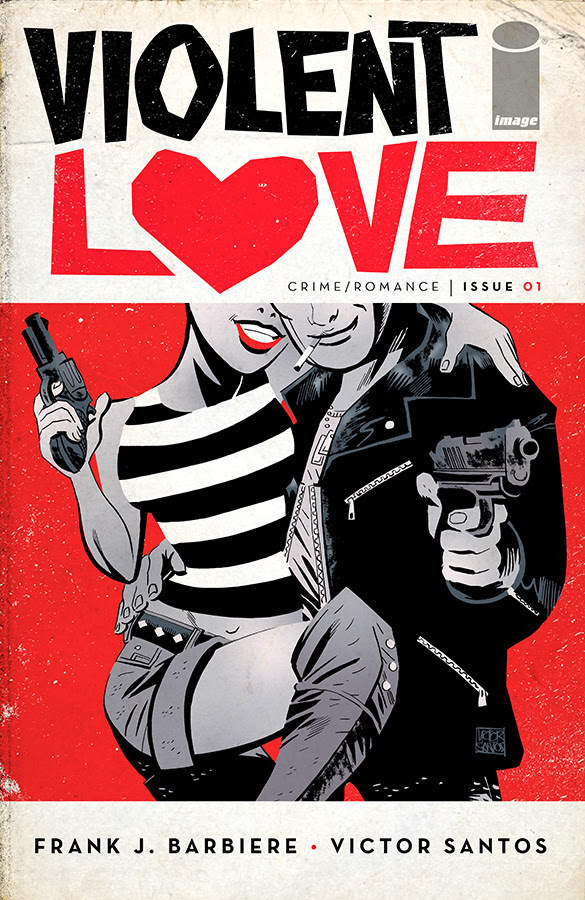 Almost fifty years ago, a young woman named Daisy Jane fell into a life of crime and disarray, spreading chaos wherever she went with her lover, Rock Bradley. But her story doesn’t begin with crime. Violent Love begins with the tale of how she fell into that life.

Barbiere brings us a Bonnie and Clyde story of star-crossed lovers, who started and ended with a bang. Like such classics as Fargo, Violent Love is part of the faux true crimes genre, and like Fargo, does well in creating that atmosphere of realism. Barbiere’s characters within the “present” may feel a tad bit cliché, but his development of Daisy’s character is fantastic. She’s ahead of her time. She’s bold, she’s smart, and if not for a few key events, she might have gone on to have a better life. I’m excited to see how she grows and what Rock will be like when he comes into the picture.

Santos creates atmosphere through his choice in color. There’s a tone he brings to every color scheme placed on a scene. The yellows of the calm future. The crimsons of a brutal murder by torture. While Santos’ art is wonderful, I would definitely have to say that his coloring is what makes this issue.

There’s something especially beautiful, yet deadly all the same, of a particular scene towards the end. The fire scene. A building surround by darkness, a building created by darkness, is set ablaze, conflagration erupting from its windows in white to yellow fury. While there are many scenes of gruesome to the point of shock value horror, this feels the most destructive and unsettling. Something about the casualness in a certain man as he lights his own cigarette, walking away from the scene—it’s disturbing in a way that keeps the reader.

Violent Love won’t be for everyone. It’s a mature historical comic about deadly people making terrible choices. But if you like Fargo, if you love Bonnie and Clyde, I suggest you check this out. Daisy’s character is intriguing from the get go and I feel like the series will only get better as it progresses. I would recommend it.