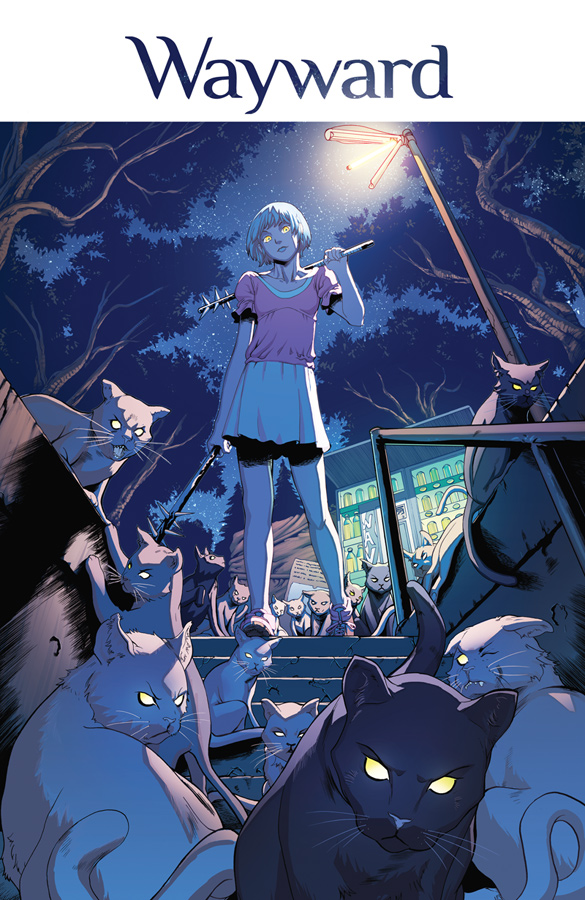 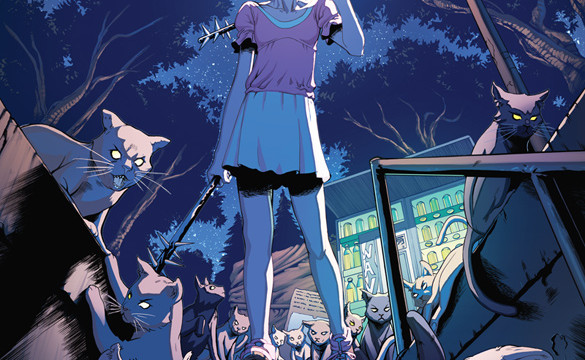 Anime and manga fans, or otaku, can rejoice as Image Comics brings a brand new series from creators Jim Zub (SKULLKICKERS, Samurai Jack) and Steve Cummings (Legends of the Dark Knight, Star Trek: The Manga). Wayward centers on a teenage, japanese/irish, girl named Rori Lane as she moves away from her father in Ireland to live with her mother in Tokyo. Rori is every bit the languished loner that teenagers often presume to be, but she carries the stereotype with a bit of graceful charm and bravery that is endearing to read. After meeting with her mother and making a few adjustments to her new surroundings, things start to look up for Rori, until she gets confronted by large creatures in an alley. If that’s wasn’t enough, a strange, cat-like woman named Ayane leaps from the sky to aid her. Dangerous turtle men, a vivacious cat-woman, and strange new abilities under the backdrop of a beautiful Tokyo setting seems to be the sort of adventurous ingredients that we will be getting from Wayward.

On the surface, Wayward is a take on the classic “fish out of water” story and knowingly adds a twist. Upon landing in Japan, Rori has mysteriously developed an internal ability to visualize how to get to her intended direction, but chalks up the random experience as possible result of jet lag. Rori intrinsically posesses the power of forecasting proper directions and perceiving proper movements. Her ability is similar to a GPS unit that most of us have come to rely upon when travelling and is a metaphor for her own misguidance and indecision in her own life. With this ability, not only does she know the way, but the right way too.

The resounding note to take away from this issue is artist Steve Cummings’ ability to amaze in this issue. From subways, streets, apartments, and alleys there are extreme details on the page that take your breath away as you scour and begin to notice little nuances that might otherwise not be presented by a less detailed artist. His panels appropriately dictate momentum as they shrink before page turns in order to increase the magnitude of the splash pages that follows, leaving your eyes to be temporarily arrested. The first double-page splash had my eyes in adornment as we are introduced to the cityscape of Tokyo. What was also important to acknowledge is how influential the coloring compliments the art in this issue. The choice to not employ any alarmingly bright colors also helps with bringing reality to the story and not feel like the premise is childish. The shadows and tones give the art a range of depth and elevates it from being viewed as something two dimensional or flat and truly polishes off the experience you get when looking at this book.

Wayward pulls directly from the anime/manga genres and makes it function. The introductory issue has laid out the basic pieces of groundwork needed to be built upon and the art was able to captivate simultaenously. While it may not be anything groundbreaking for fans of the genre, there is still some great Japanese lore that Zub and Cummings are deriving from and their incredible faithfulness to the landscape of Tokyo might be proof enough that this series is worth paying attention to.