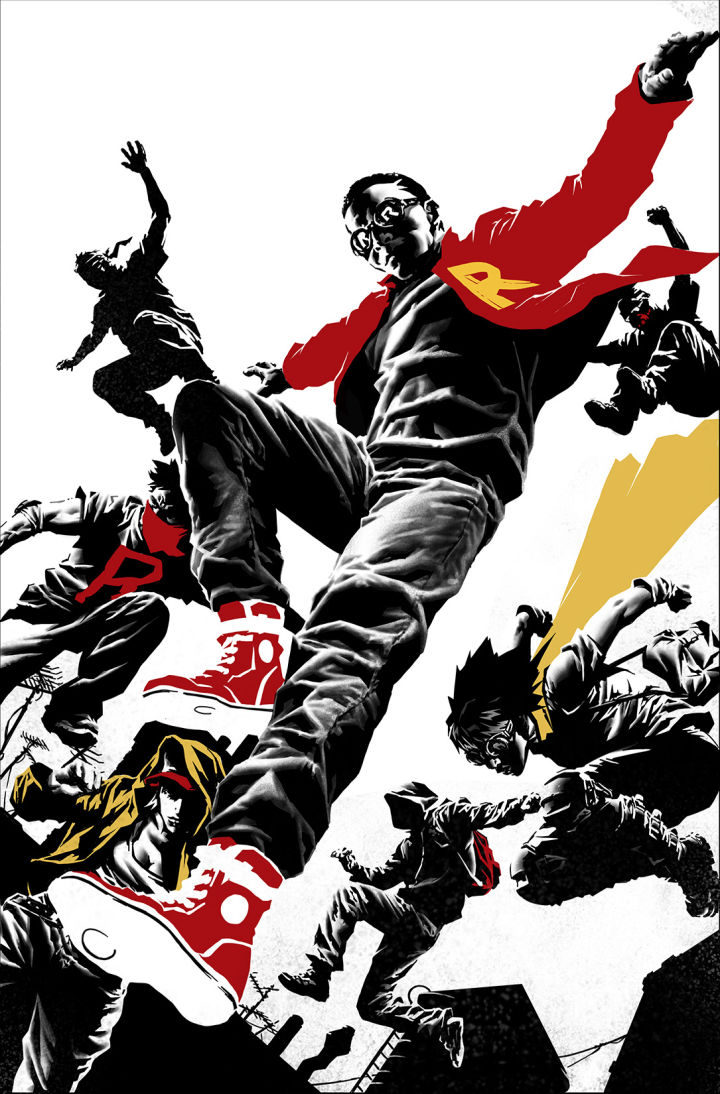 Duke Thomas has a problem: his parents have been missing since the events of the Joker’s Endgame in Gotham City. He’s been entrusted to the foster care system. And no one seems to be working all that hard at changing that, except him. So when an investigation into the sewer system goes south, help comes in a most unexpected form. The Robins have arrived.

There’s a lot I find really compelling about the idea behind this series. A child army, inspired not necessarily by the legend of Batman, but that of his partner, feels like a winning platform for some serious adventure. Add into that economic disparity, a crumbling city, and at least some amount of disenfranchisement of racial minorities amid a civic disaster, and you have a real recipe for making the Dark Knight’s turf relatable to real social issues in 2015.

But We Are… Robin! #1 doesn’t quite live up to that promise out of the gate.

Lee Bermejo is taking on plot and scripting for this series, giving us a stronger introduction to character than he did in the 8 page preview last month. Duke Thomas, previously appearing in Batman, takes the lead immediately with Bermejo establishing how he came to be an orphan, albeit perhaps a temporary one, and giving us some sense of his skill set and drive. It’s a mixed bag of internal monologue, however, with some cultural references feeling incomplete or ringing false, leaving Duke’s voice feeling a little flatter than I was hoping by the end of the issue.

There’s a limited amount of texting cues used throughout — just enough to establish some names for future reference — and used far more sparingly than prior, but it doesn’t really match up with any particular character very well. As a result, it translates as a little too omniscient in terms of the side narration, and that just doesn’t read as grounded as the concept might demand. The sewer leader, too, feels a bit like a caricature and not particularly compelling, so by the end of the issue, I’m not sure I understand anyone’s motivation, save Duke’s.

The pencils by Jorge Corona are not a style I’m particularly fond of — exaggerated and spindly in its body shapes and facial expressions. It serves to make some of the events of the issue feel cartoony, when the subject matter — foster care system abuse, homelessness, street fights, and gang activity — seems to demand a more representational approach if it is to be taken seriously as a basis for the drama. Backgrounds are a little hit or miss, although filled in with a beautiful smoky filter by colorist Mulvihill.

Where the most artistic promise lies, however, is in the all too brief two-page epilogue, illustrated by Khary Randolph. These pages have a much stronger sense of space, realistic facial expression, and body language, even though we see the characters only in brief flashes on the screen. If I am predicting correctly, Randolph looks to be the relief artist with Corona taking lead, and in a very real sense, I wish those roles were reversed.

We Are… Robin! #1 isn’t the strongest first issue one could hope for, but there is a lot of potential to the idea of all-new, racially diverse teenagers making the Robin name their own. I want this book to succeed, but it will need to coalesce its character work much faster and deeper going into issue #2 to keep my interest.