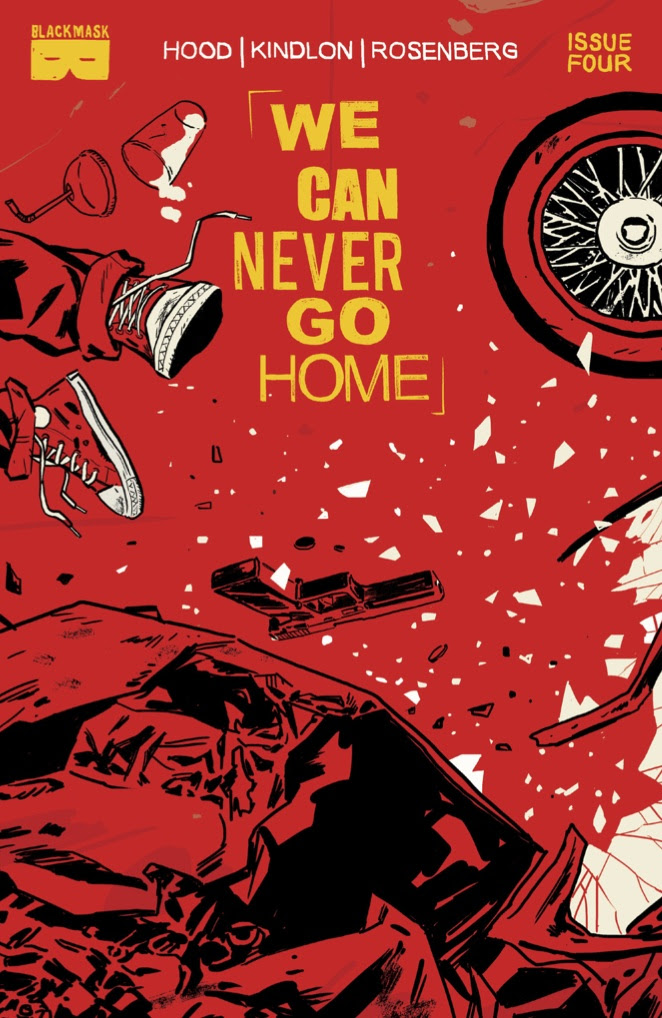 In case you haven’t heard, Black Mask Studios very recently made a digital publishing deal with Comixology and Kindle, making it much, much easier to get your hands on their incredible line-up. We Can Never Go Home has been one of the more difficult books to collect physically, so now is a perfect time to grab the digital version of this series and glue your eyes to the screen.

So, why should you become an unabashed fan of We Can Never Go Home? Well, if this most recent issue is any indicator, there are big things in store for this outstanding series. Written by Patrick Kindlon, and Matthew Rosenberg and brought to artistic life by Josh Hood, We Can Never Go Home #4 takes readers on the highest point of the journey yet and sends the characters to the deepest depths of hell. Also, there’s lots of puking in this issue, which means lots of reasons to puke, which is my roundabout way of saying a whole lot of action is going down.

We Can Never Go Home follows two super-powered teenagers, who, after committing some pretty heinous offenses in the heat of really tense moments are on the run. Madison, who when angry or super nervous becomes diamond skinned and strong as a bulldozer follows “I can wish you dead” Duncan on an adventure that includes robbing drug dealers and running away from the authorities. This issue, however, throws an incredibly big wrench in everything (seriously, this wrench has got to be mammoth-sized), and the plot twists in an extremely interesting way involving the feds and other covert organizations.

Okay, so the plot is awesome, right? But the real heart of this book lies in the heart of its creators. It’s so clear just how much Kindlon and Rosenberg care about this story and these characters. The writers know these guys inside and out, and while their final destination may not be clear to readers just yet, this story moves the characters around in a definitive and constantly forward-moving manner. Both Maddie and Duncan have so much depth to them, which is amazing when you consider that this is only the fourth issue of a series with completely original characters. These characters are so multi-dimensional, they are ready to pop off the page and become your new best friends. Except you may want to consider your plans for survival, as these two have some of the nastiest luck I’ve seen.

I love how natural the dialogue is in this book. I find myself laughing at what Duncan and Maddie say to each other, but I also don’t get that “no one would ever say that” feeling even with the most clever lines. The characters are put in the most extraordinary situations, yet this series is so grounded in reality it feels like watching true events in a person’s life unfold. That being said, what’s perhaps the most incredible about this book is the changing nature of the threat and how seamlessly plot moves forward. Every issue has a different enemy, and each one poses a unique danger to our protagonists, yet they don’t feel forced. One thing that I’m slightly cautious about, however, is that this issue introduced another pretty dark topic. Some really serious sexual-related stuff happens, and I just hope it doesn’t go unaddressed. I have full faith that it will be treated with respect given the track record of the creators involved, but it was still pretty shocking (and not in a bad way, just in a holy crap way).

Josh Hood is a wonderful talent, and this book showcases his ability to bring this book to its fullest potential. I love his designs for the characters and how fearlessly he portrays Maddie and Duncan panel to panel. At this, point, he’s clearly smoothed out any bumps he may have originally had with the characters in terms of consistency (which was really only a couple panels in issue one). Hood knows these characters just as well as Kindlon and Rosenberg and has perfected his depiction of them right down to their gaits and the twinkles in their eyes. And speaking of twinkles in eyes, Hood has some serious talent in drawing Maddie’s powers. I love the way that her abilities crackle to life in each scene, and Hood has captured the kinetic feel of this series wonderfully.

Tyler Boss’ colors in this book are perfect for moving the story forward. If you flip (or scroll!) through the book, you are met with really fantastic color shifts that mimic the constant energy of this issue. Everything about the colors just work perfectly to capture that late 80s/early 90s feel and suit the tone of this issue. Hood also does some incredible stuff just in terms of the sheer amount of work he puts into this book. This issue has another page with panels numbers into the twenties (25 by my count!). Yet, every panel is smooth, adds something necessary to the story, and doesn’t lose the flow. My one artistic criticism of this issue is that the action can be a little confusing at times. When there are more than a few people in a panel or page, tracking who gets punched and who’s down for the count takes a little effort. However, this is such a minor thing, especially considering just how much goes into each issue. Besides, I’ll take any excuse to reread each page.

So. Check out We Can Never Go Home. I can’t recommend this series enough, and now that it’s available digitally…no excuses people. Also, it just got announced for its second volume coming in 2016, so there’s bound to be so much more this world has to offer. We Can Never Go Home is the series that people will talk about as the series that redefined independent and diverse story-telling. Don’t miss out.