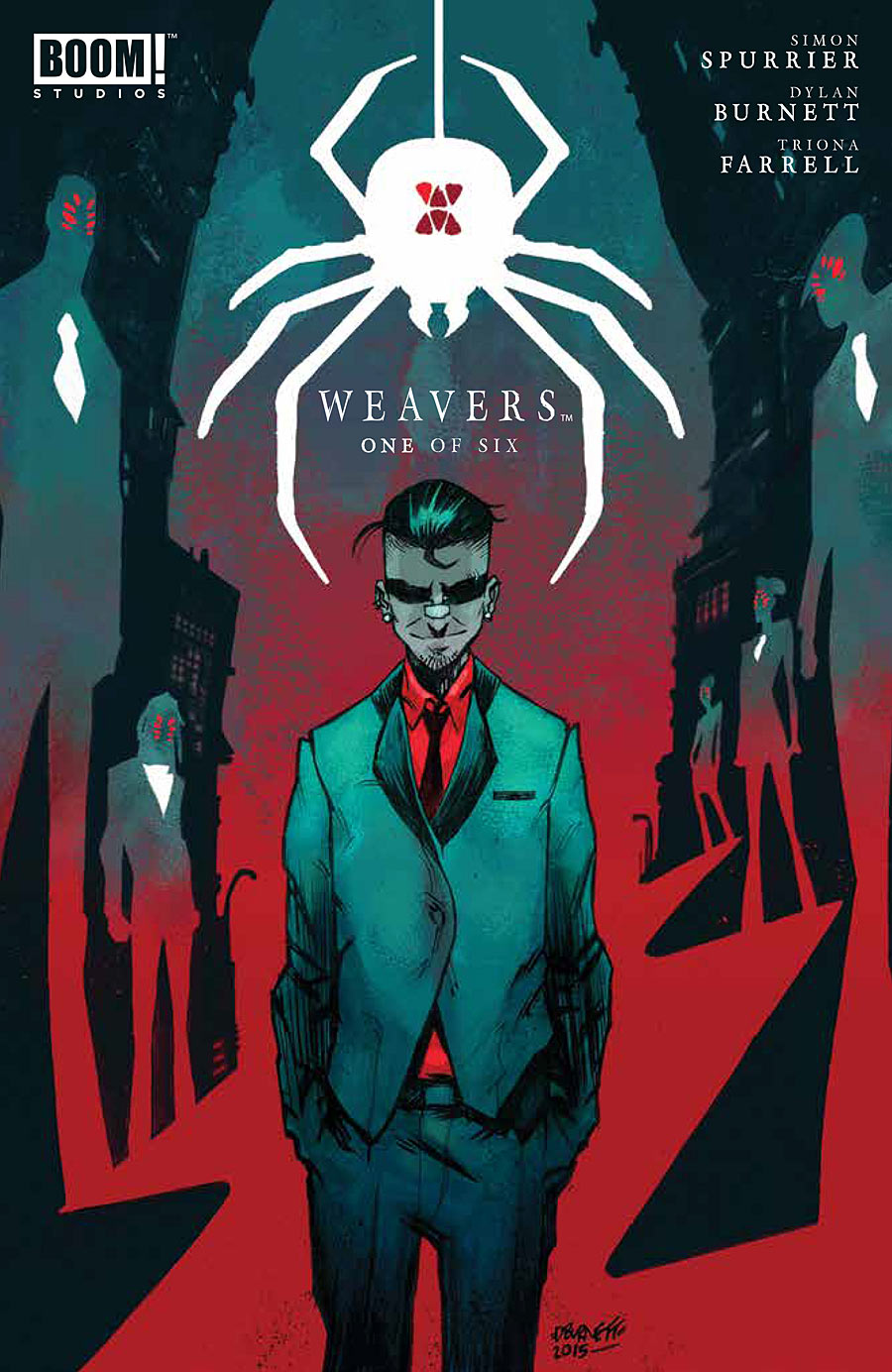 You’ve never seen a gang story quite like this, mostly because you’ve likely not seen a gang of rough ‘n’ toughs with 8 eyes and long spindly legs. Well, hold onto your saddles, because Weavers #1 explores this insane world of spider-infused mafia-esque characters and the problems that come with it. Sound crazy? Well, with writer Simon Spurrier, artist Dylan Burnett, colorist Triona Farrell, and letterer Jim Campbell involved, you can rest assured that this will be one truly wild ride.

Weavers‘ star is Sid, a less than fortunate young man imbued with a supernatural spider which makes him a member of the organized crime group, The Weavers. Each member of this gang has a mystical spider within their systems, granting them with some strange powers. Sid is hardly a willing member of The Weavers, and by issue’s end his allegiance to the spider-mob is wavering.

I’m going to kick this off by saying that Dylan Burnett is one to watch out for. His art is absolutely fantastic in this book, and others that I’ve read (Interceptor, for example). Every panel is kinetic in the best ways. Motion is fluid and easy to read, while maintaining exciting amounts of action. I wish the character designs were a little bit more recognizable between Sid and some of the other lackeys, but at the same time, this adds to the “mob” feel of the book. Burnett has a clearly recognizable style that suits the tone of this book well — dark shadows, gritty characters, and over the top emotion.

Triona Farrell’s colors complement Burnett’s linework beautifully. The bright colors bring out the supernatural overtones of the story, juxtaposed well with the darker, more realistic backgrounds. Farrell also colors the flashback pages in a clearly understandable manner, making the past stand out as so while moving the story forward in an easy to read manner.

The premise behind this new Simon Spurrier book is solid. I love the idea of tiny magical spiders infusing their hosts with powers. It’s such a clever plot point that has so many interesting possibilities for this series.

That being said, I found this first issue a little bit difficult to follow. As a reader, we’re thrown in right away, without any context. We don’t know much about Sid or what’s going on, and while pieces are revealed throughout the first issue, it’s overall difficult to make sense of. Things picked up a lot once Frankie, daughter of the boss, was introduced, but I worry some readers might drop off before getting to that point.

On the plus side, there’s a lot of interesting action leading up to the middle “slow-down” portion of the book, which was definitely enough to keep me hooked until then. By the end of the issue, however, the story is more clearly delineated, and certainly intriguing enough to make me want to read issue #2.

Weavers is a fast-paced, original, and clever story. The premise will cling onto you (much like the tiny little hairy feet of a spider), and spin you around on an exhilarating ride through the grimy criminal underground network. This is a beautiful book from a very talented team, and it would behoove you to give the first issue a try. Who knows? Maybe you’ll find that you, too, have a supernatural spider hidden deep within.