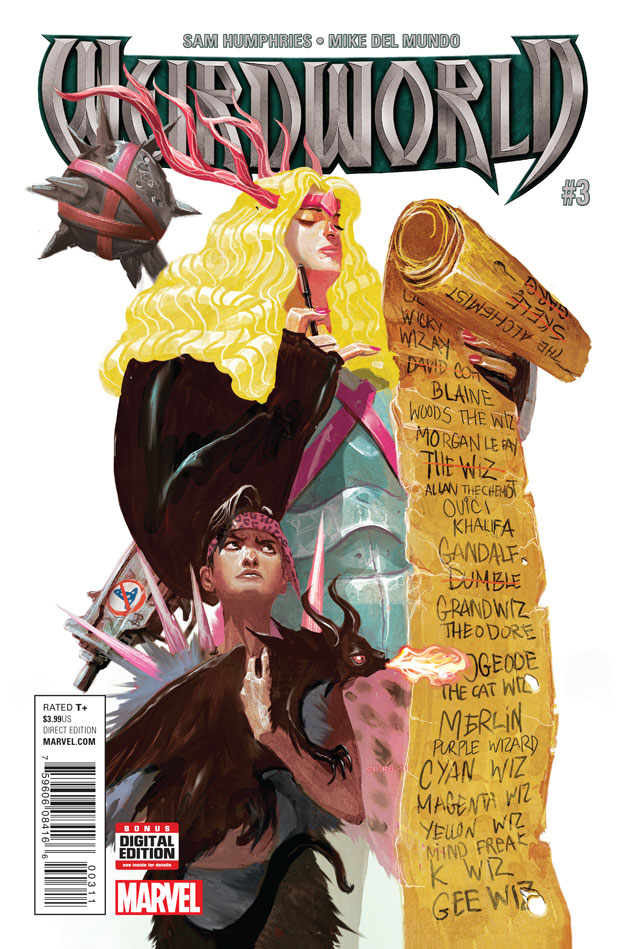 “Weirdworld fits together like an engine. And you do not belong.” So speaks the Grand Mechanic, but to her bluster, I say, “Yeah, I do.” And you do to.

Written by Sam Humphries and art-ed by Mike Del Mundo, Weirdworld #3 is a bizarre cruise around the fringe of stream of consciousness. Or at least a charge through a whole bunch of mildly tangentially-related ideas with cool monikers like the Grand Mechanic, the Mammoth Inferno, sand sharks, and Ogeode of the Wilder Men.

The Secret Wars-inspired miniseries, written by Jason Aaron, dug deep into the corners of the Marvel Universe, dusting off concepts like Arkon and Crystar. In Weirdworld #3 (and the pair of preceding issues in this ongoing) Humphries is doing less to explore the dusty corners and choosing instead to assemble some new ideas, shine them up, and present them like a comic book version of refugee toys hiding under Sid’s bed in Toy Story.

Central in that collection is Becca Rodriguez, an Earth girl who tumbled into Weirdworld. Once there, she befriended Ogeode, who was killed by Goleta the Wizardslayer. Now, all three of them are embarking upon a quest to obtain parts from the Grand Mechanic. Lurking in the shadows, Morgan Le Fay is moving into the center of the tale, poised to strike and add more drama to the chaos of Becca’s quest for home in a story that defies label. There are unequal parts hero’s quest, fantasy adventure, sci-fi drama, and buddy film at work in Weirdworld #3, with Becca at the center, pinging through the tale.

Becca is believably loveable, the sort of spunky heroine who would star in a Netflix series or even a CW show. Humphries gives her a quest for family, a noble mission temporarily sidetracked through the wonder of Weirdworld. At wits’ end, Becca ranges between defiance and depression. She is struggling to make heads or tails of Weirdworld, and the journey is immersive for the reader.

An adventure filled with sprawling landscapes and dynamic ideas needs a masterful storyteller and an inspired architect. Mike Del Mundo is both of those, and his work in Weirdworld #3 seems like a true collaboration: occasionally Humphries directs him, sometimes, he inspires Humphries. The end result is a comic filled with all sorts of unexpected visuals. Even the “normal” pieces of the adventure are presented in spectacular fashion. Del Mundo (with an assist from Marco D’Alfonso) creates worlds within worlds. Every scene is a fully formed environment described in fluid shapes and vibrant color. The Grand Mechanic sports feathery-scale green hair that directly contrasts the red lenses of her goggles. The Mammoth Inferno glows with raging heat. The atmosphere of the marketplace picks up a mid-afternoon haze, telegraphing the heat and discomfort permeating the air.

Add to that a magnificent command of depth of field in his fluid watercolor-like painting, and Del Mundo earns the verb “arted.” These aren’t drawings, but neither are they distinctly paintings. The visuals flow one panel to the next, melt around and through the cast, absorbing Cory Petit’s word balloons and bleeding off the boundaries of every page. As an art book, Weirdworld #3 would be engrossing. As a comic, the art is both descriptive and captivating. Del Mundo gives the characters in Weirdworld #3 definition and personality and even infuses the world itself with attitude and life.

Weirdworld #3 is a gem of a comic. It doesn’t star Spider-Man or Deadpool. It doesn’t even have anything marginally related to the Avengers (save for Morgan Le Fay, who has fought them a couple times), but it is full of Marvel’s spirit of ideas. Humphries, Del Mundo, D’Alfonso, and Petit are building a new legend, constructing a kingdom, playfully dangerous, and wildly imaginative. This comic is divergent from the standard-issue, and if Marvel wanted to hold up an example of what they meant for “All-New” and “All-Different,” it doesn’t get much more new or different than this.

According to the Grand Mechanic, Becca may not belong on Weirdworld, but you do. Seek it out. Give it a go. Hop into the bright pink muscle car alongside Becca the thief and Goleta the Wizardslayer. Discover new worlds. Like Weirdworld.