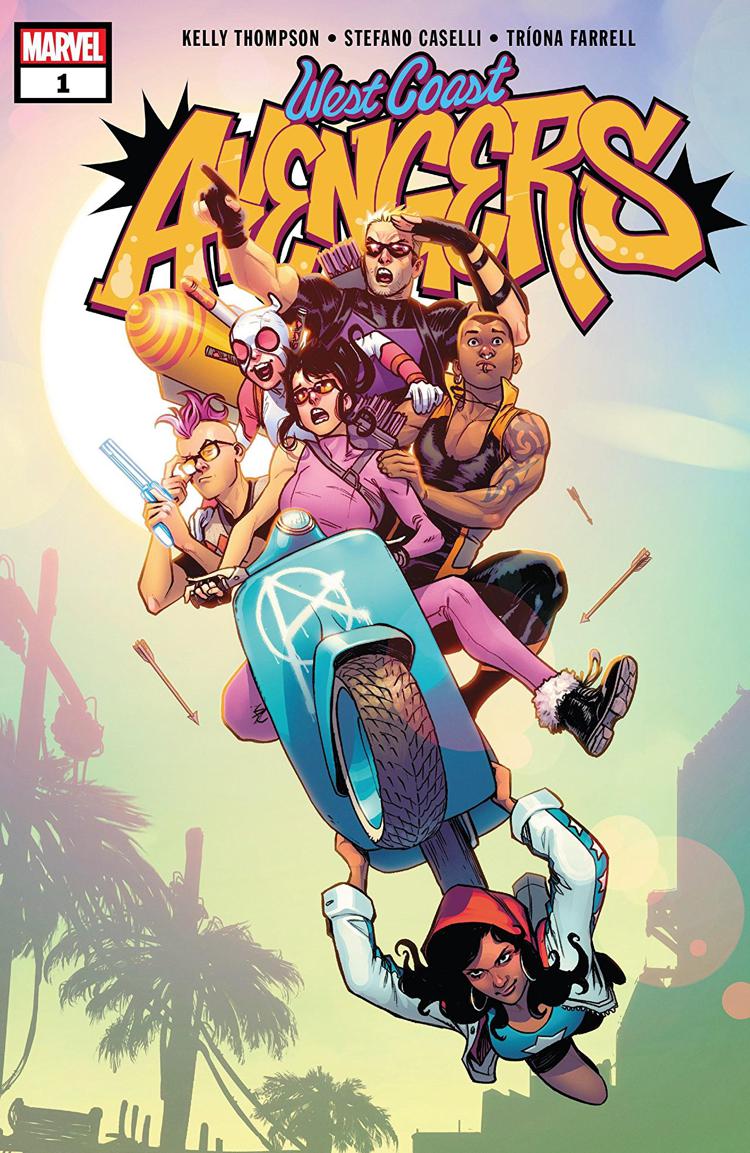 Gwenpool’s last line – the last line of dialog in this comic – sums up the adventure that is West Coast Avengers #1 quite nicely. Written by Kelly Thompson, drawn by Stefano Caselli, colored by Triona Farrell, and lettered by Joe Caramagna, this comic is filled with the type of thing that makes comics so fun and entertaining.

Thompson sets up readers with a reality TV-style introduction and moves forward from there to show that the West Coast needs a team of heroes banded together to fight. . .land sharks?! Thompson immediately makes West Coast Avengers a haven for concepts and characters that are beloved, but between gigs, bringing in both Hawkeyes (“There’s two. We’re both cute.”), America Chavez, and Gwenpool. Fuse is given a heroic debut in this comic, and Quentin Quite (Kid Omega) comes along later in the issue, to stir the pot in the way only Quentin Quire can.

It’s a goofy group, to be sure, but to Thompson’s credit, it’s a group that has heart and sets off on a fun first adventure. Through her characters, Thompson identifies the need for the team and propels them into purpose. Similarly, Hawkeye (Clint Barton) nudges Hawkeye (Kate Bishop) into the spotlight to lead the group, after all, it was her idea and he’s already had a stint as leader of the “Wackos” (the moniker given to the original West Coast Avengers team by Ben Grimm).

This isn’t Caselli’s first Avengers rodeo (more on that later), but it does give him a chance to be more expressive and comical and comically expressive. Hawkeye (Kate) and Fuse giving the reader side eyes as things get goofy, the nascent team attacking pizza as they debrief after said land shark attack, and the range of expressions each character displays during their reality interviews is simply wonderful. Some of these things would be out of place in the core Avengers title, but here, as this team is forming and storming, these things are welcome.

Around and through all of that, Caselli’s skill is undeniably present. When Quire enters the scene, the point-of-view panel is masterfully constructed, giving every present character a chance to be showcased through individual body language while being depicted in visibly lived in space, with all the accessories one might find in any livable apartment-type space. Farrell’s colors help make the space comfortable, but that’s just a sample of the colorist’s capabilities that are equally on display throughout West Coast Avengers #1. From the subtle scanlines of the interview footage to the make-J.J.-Abrams-jealous lens flares above the California shore, to the collaborative work with Caselli in making the 200-foot-tall were-woman’s tiger stripes (no spoilers!) fuzzy, Farrell does it all.

Joe Caramagna letters are undeniably classic, and completely on pointe for a fun, engaging comic. With sounds effects that range from “PFOOMP” to “MOOOIST” to the explosive screams and guttural utterances that burst free from their word balloons, every letter and punctuation mark has purpose. Caramagna uses the full range in West Coast Avengers #1, keeping in step with Thompson’s script and the story’s lighthearted approach to the absurdity of the world these characters live in.

I found myself regretting the fact that I review digital versions of comics tethered to a desktop computer (it’s reliable!) as this is a PERFECT summer comic – a perfect hammock/beach/treehouse comic. It’s a fun read, and one fans of any of the aforementioned characters will want to pick up. Thompson, Caselli, Farrell, and Caramagna have a fun start here and the book has potential. I’ll be looking forward to the next one. And probably re-reading this one.

As for that Caselli-Avengers thing I mentioned earlier? Look him up. You have a search engine nearby and you’ve read this review. If you don’t know Caselli by now, give West Coast Avengers #1 a go and then dig into his back catalog. There’s some fun stuff out there.