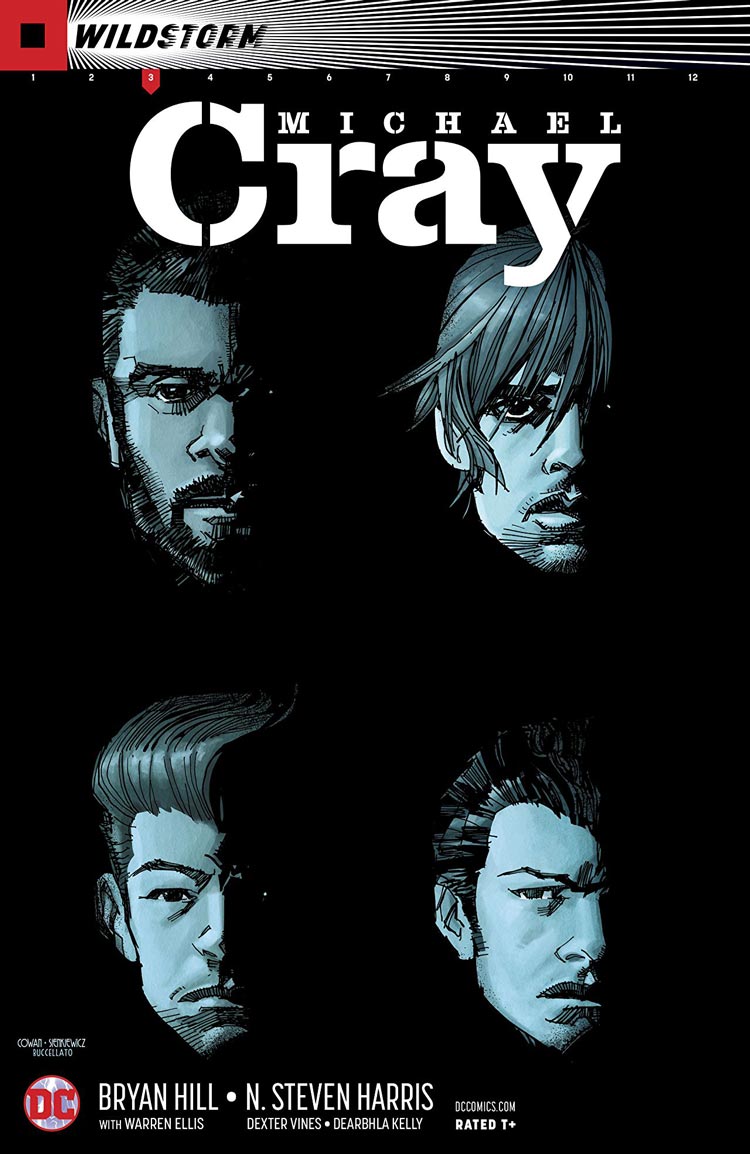 The next case for Michael Cray and his team has their sights set on Barry Allen and he’s not your average forensic scientist and Hill starts the first part of this new case with appropriate amounts of workplace drama, character interactions, and time with the villain of the hour.

The third issue balances all of the characters and moving parts with efficiency as Harris and Vines give a more detailed and visceral experience, if not for a little moment early in the issue displaying Barry’s powers with caption boxes from Trelane providing information and letting the art and colors from Kelly speak for themselves. The colors capture this version of Barry’s assault on guards greatly. As he runs the impact area of his punches are the spots that are dark red, proving fatal for everyone on the receiving end.

The story reads like an episode of a CSI show in its procedural ways. Hill gives plenty of material for Cray and his boss Trelane to go over and discuss regarding their new target. Science and technology roots Barry into a fully realized grounded threat with some personal hangups that confirms this isn’t your everyday Barry Allen at work.

Cray and Trelane’s conversation takes place over different panels and Harris and Vines do well to always have everyone talking in frame or up close. Hill works in continuing to write classic DC heroes as demented and damaged people who are not cut from the same cloth as their Prime Earth counterparts and not repeating in their motivations or style of attack. This Barry Allen is crazy, unhinged, and not all the way there with Harris drawing the craziness akin to Green Goblin in Spider-Man 1.

Keeping on beat with the “downtime” the issue is about, the dialogue between Cray and his Doctor is unorthodox with how the characters are both playing the game of not telling to much and keeping things hidden, both having their own agendas. The side plot of his power set and it’s a point of focus for the issue as time passes is opening doors for the two characters.

The lack of sound for the moments adds to the cold and calculating manner between these two and Hill leaves things to be picked up for a later issue as the rabbit hole becomes more complicated and possibly more.

Hill continues the writing of characters that are all intelligent throughout and Harris matches his script accompanied with art packed with some emotional weight. Cray has a life outside of the operations he does and issues like these letting us see pass those adventures are great for his character.

Harris, Vines, and Kelly all have stepped up as Cray goes to various locations and they’re filled with business and colors to fill out the world of California. The colors are solely to help the characters stand out more with Vines’ inking strengths that. Cray meets up with his team to discuss the mission and it rounds out an issue of Cray setting up for another mission while also pushing his supporting cast into directions that can all be stretched into more plotlines down the line.

The letters from Bowland are used in normal capacity and while it’s good to let the art and panels speak for themselves for the action, larger letters could help reinforce the flow and strength of the action.

Michael Cray is a book that has the best of both world’s with the rollercoaster-style ride the issues are beginning to take. This is a book that’s powered by the thinking man level that the characters are playing at thanks to Hill and his enticing dialogue as it continues to invert everything we think we know about the DCU. Harris, Vines, and Kelly do the heavy lifting in letting the art and colors speak for themselves stressing the action, flow of battle, and the colors for the dialogue heavy moments as well is something the book does exceptionally well to talk about heavier moments.

Michael Cray remains a consistently solid read of a book that is dead set on accomplishing reestablishing Michael Cray as a force in the Wild Storm Universe and doesn’t lose focus along the way while it’s trying to stay one step ahead of where you think both the story and characters are going to go.