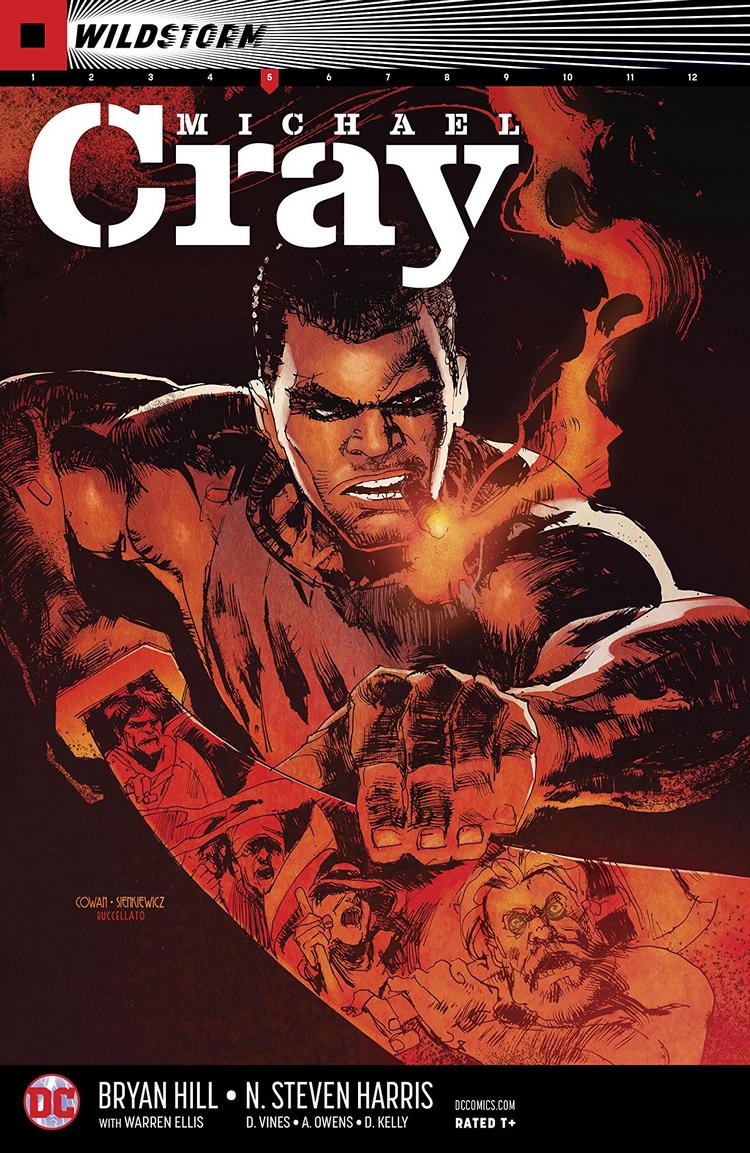 Michael Cray is one of the more unconventional comics based around doing twisted things to your favorite DC superheroes. That said, issue 5 of this workplace thriller comic features a supernatural, folklore threat and his name is Arthur Curry aka The Aquaman.

Hill and Hama deliver a chilling cold open for the Wildstorm Aquaman and telling the display of his particular skill set and lifestyle tells us everything we need to know. Harris, Vines, and Owens craft an opening sequence that catches us up on Arthur’s business without even saying a word. The panels build up little by little with Harris keeping the panels and what we see short, sweet, and to the point. The opening feels out of time as everything concerning it is older akin to a Horror Film that sets the tone with the first kill.

Hill establishes the ferocity and the continued savagery of this world’s Aquaman but with purpose. Showing not telling is something that Hill has gone by in his run on Michael Cray and it continues here. The intro dealing with Aquaman has the setup, execution, and reasoning for his sacrificial lamb operation and while the citizens know full well what this entails, it doesn’t make the act any less bloody and dangerous. Hill, Vines, and Owens all work together with Kelly to keep the pencils and inking in league with the murky and gritty coloring. Everything from the approach to the sacrifice itself is captured beautifully with the panels showing us just what we need to see to sell it. Aquaman is more of an enigma like the Horror Movie monster that he is, being heavily inked and in the shadows by Vines and Owens until he retreats back into his home.

With Michael Cray and his mission on the other hand, we settle back into the rhythm of this series with an issue dedicated to the setup and the execution of the mission that will follow suit shortly after. Hill has a handle of pulling different things out of the characters depending on the missions thus far and this time around it’s a more intimate affair with only Cray and a teammate with a funny reasoning for tagging along. Keeping things as grounded and realistic as possible for Cray’s world sets him up for a different type of story, specifically for this mission. Harris keeps the focus solely on the characters throughout, up close and personal to capture the various looks, glares, and body language.

Michael Cray as a title puts the characters first and Hill smartly sets up the cast and the environment they’re in with danger and uncertainty. The dialogue in New Zealand is a real treat here. The backgrounds are detailed enough to let Cray have fun during a fight with subtle use of his power thanks to the coloring from Kelly. The coloring is firm and unwavering with dashes and bursts of blood when the fighting prowess of Cray is on display. The lack of lettering from Bowland is off-putting because the scenes appear as if they are giving off sound and effect but they do work nonetheless so it’s a small issue to have.

Michael Cray is a book that has no business being this good of a book. Hill is doing a twelve issue character study and reinvention of Michael Cray and his corner of the world with twisted versions of DC characters along for the ride. Despite the simplicity in the story beats, the creative team makes up for in the world and the characters that populate it. Harris works very well in keeping dialogue heavy scenes filled with tension and intrigue and the coloring from Kelly fits the muddled, gritty, and at times clean sensibilities of Michael Cray. With another mission getting underway, Cray and his team are under a different kind of, more immediate threat and I can’t wait to see the lengths Cray will go to get the job done.