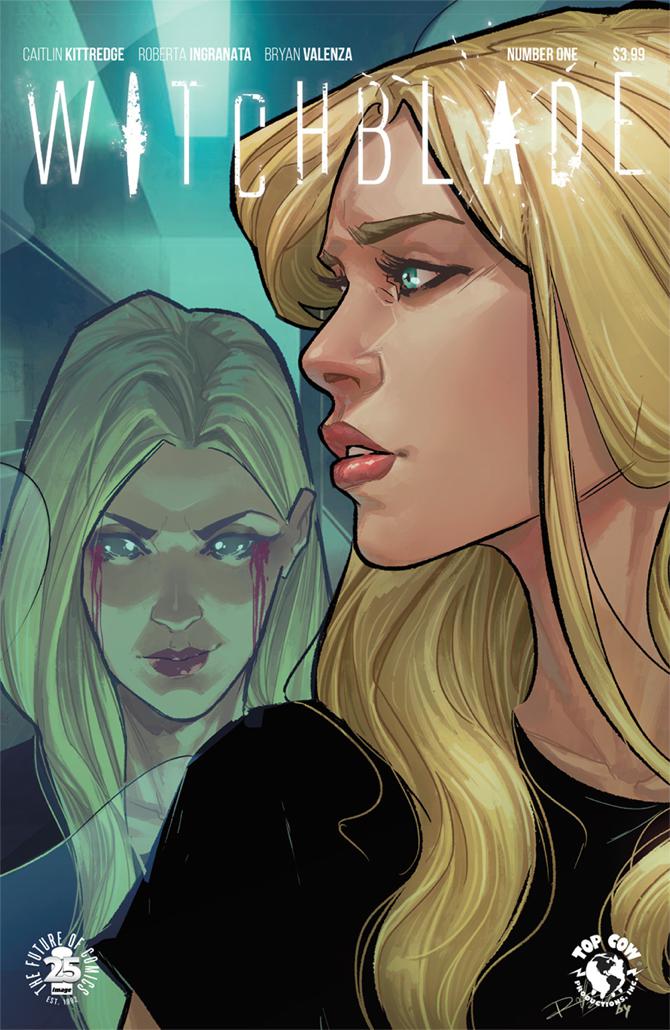 The 90’s was a time of artistic hyperbole for comic books. Half of the books featured impossibly perfect over-sexualized girls fighting crime basically naked. (The other half are all #1s in polybags with bonus trading card inside.) One of the most popular heroes from this era fought crime with only the Witchblade to protect and cover her for many years. Not to become a relic of the past, though, the Witchblade has made a triumphant return in the pages of Image comics new reboot. The new series adds more than clothes to it’s hero; it has added a depth and humanity that wasn’t there before.

Akin to an Abrams reboot Caitlin Kittredge has taken the best thing about the original Witchblade series, the premise, and has expounded upon it. Kittredge has started with a solid foundation and built up a much better frame on top of it to work on over the next few issues. She has given birth to a realistic and multi-dimensional main character, Alex Underwood, that within the first couple of pages attaches herself to the reader like the Witchblade itself would a new host.  All the work behind the scenes that has been spent world-building and character developing shows brightly in this first issue. It is obvious that Kittredge has strived hard to make this story her own while still preserving the spirit of the original.

The reader shares the journey with Alex as she deals with the confusion of pairing with this ancient artifact. There are times when the flow may seem confusing itself but each time the reader almost gets lost things are brought back into focus. It’s a great way to take part in Alex’s desperation and weariness with what’s taking place in her mind. The voice she hears in her head is very realistically portrayed as a possible mental disorder. Anyone that has experienced this before will find her torment hitting close to home. It also helps that Alex is not a gritty trained cop that is ready to fight crime. She is just an everyday person who has regular responsibilities and consequences. The story feels grounded enough in the real world that it should bring in new readers while still keeping enough of the original to intrigue fans.

Roberta Ingranata’s artwork in this first issue is beautiful and elevates the idea of rebooting Witchblade to an acceptable level. While the original series tended to be more voluptuous Ingranata’s art is much closer to reality and gritty but gorgeous at the same time. The set design firmly places the story in our reality but has the soft haze of fantasy hanging around the edges. Ingranata wisely makes use of wide panel layouts for most of the pages giving the narrative a very cinematic feel to it. When she doesn’t use the wide panels she breaks up the flow with long vertical panels that starkly capture key moments. It’s very well done and feels more like art than a comic book. One page in particular really stands out in this issue and without spoiling anything it is nice way of conveying memories. It is beautifully rendered.

Bryan Valenza’s colors cement in the reader’s mind the atmosphere of the locations throughout the issue; New York feels cold, wintery, and snowflakes seem to fall around you.  He also has done a superb job at coloring the characters and brings Alex in particular to life with excellent use of highlights. To round out the artwork Troy Peteri handles the lettering for the issue nicely. The relic, Alex’s inner dialogue and spoken word all stand out from each other and are rendered lovely.

If you are a Witchblade fan then forget everything you know before you open the book. For good or bad it will allow you to judge this story on it’s own merits. The work that Kittredge and Ingranata have put into this issue is more than obvious and may end up being more memorable than the original’s legacy. They have captured and injected a world of emotion into these pages bringing this property out of the 90s and into the modern times.