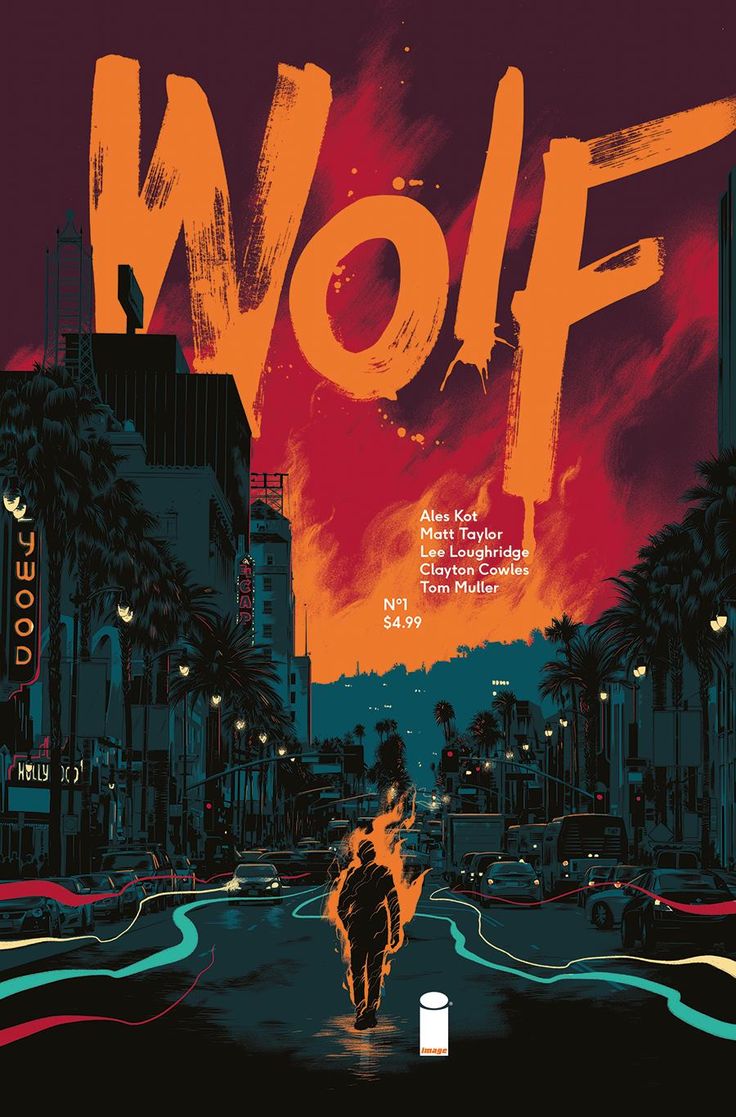 I’m reading a lot of big comics these days. And by big, I really mean size. Last week, I read Island #1, over 100 pages long, and this week, Wolf #1 clocks in at about 60 pages — approaching three times the length of your average issue. While Island is a magazine, collecting a number of different works from different creators, Wolf is a traditional (in format) comic with a single narrative so — what gives with the extra pages?

I’m actually not sure.

I’m a chatty writer; I’m always trying to get away with more. One of the things I’ve found frustrating about the length of a single (American) comics issue is, often, they can feel too short — not enough movement. I’ve been thinking about trade waiting for some series not as a matter of money but actually as a matter of narrative. Sometimes I feel like reading it every month hurts my experience. But then we have something like the first issue of Wolf, something I should appreciate because the creators have more time to play around — but didn’t quite because that extra time wasn’t used effectively.

The first half, the first thirty pages, read very loosely. We learn that paranormal detective Antoine Wolfe, better known as Wolf, is immortal and wrapped up in something with a very rich (and very racist) old man. As is typical, we’re dropped in the middle of things and meant to sort out what’s happening for ourselves — but the connections between one scene and the next are incredibly tenuous. Scenes almost made sense, but never quite got there. I’m sure Kot will eventually get around to explaining some things, but I never felt confident that there was a thread tying all these events together—until I hit the halfway point.

The difference between the first thirty pages and the last is almost like night and day when it comes to storytelling. We jump into one of Wolf’s small cases — helping a friend deal with vampiric landlords (literally)—with hints of the larger mystery and everything unfolds naturally. Much less telling, much more showing. Each scene flows seamlessly into the next and world-expanding details are alluded to in such a way that readers can put the pieces together without feeling like the narrative is getting away from them. Exposition is careful and unforced; confidence is fully restored.

It’s weird to feel that kind of whiplash in a single issue and weird that the demarcating line was so clear. A reader could start right at that point, miss very little, and get a much stronger impression of the story over all. As much as I like extended material, not only was it not quite justified here, it also detracts from the quality of the latter half. With a few expositional reworks, this issue could have been cut in half and presented at a near-standard size with a tighter structure. Nearly all the information you really need to get in the first portion, you can derive from the second in a much more exciting way. It’s almost a completely different comic.

For the moment, I’m not entirely engaged by our protagonist as an individual and the larger case we seem to be leading into feels a bit too familiar — a young girl might be the key to the apocalypse. Still there’s enough meat in the world-building that I’m happy to be patient. Not only is Wolf immortal (as well as suicidal) but his world contains the aforementioned landlord vampires and Cthulhu-like friends named Freddy. I’m into crime and I’m into the supernatural, so this is a recipe that works for me.

The best scenes are actually the mundane ones, the ones that show off the world’s mechanics, its social rules. I like reading about Freddy Chthonic’s difficulty with rent and his struggle to drink coffee without a straw. I’m very much interested in the day-to-day life of vampire landlords. I’m really hoping Kot taps more of those aspects, as those are what made the issue unique. Freddy’s dialogue in particular adds a shot of personality and quirk and relatability into the narrative, so I’d like to see him stick around.

Matt Taylor is very, very strong on the supernatural art, especially in combination with Lee Loughridge. The first page reminded me strongly of Declan Shalvey and Jordie Bellaire’s work on Injection – eerily pale greens and blues that serve as stark contrast to hard reds and oranges. It’s a fantastic opening and the pages that follow in that sequence maintain that same quality, but it’s when we hit the everyday that the art loses its confidence a bit.

It’s not quite as bold and is a little inconsistent. Wolf’s face often looks different from panel to panel, depending on the angle. It’s much the same for other characters too, Taylor doesn’t seem to have a full handle on it until we get closer to the magical second-half, when the expressions are significantly more consistent across all the characters. There’s also a peculiar use of silhouette at times that doesn’t quite gel with the rest of the style. The silhouettes aren’t bordered, so you get this odd layered effect.

Loughridge’s colors are also much less inspired when we leave the supernatural elements. The first few pages are wrought with emotion, but the ones that follow are a bit lackluster greens and orange-browns—sort of equivalent to a sepia overlay. I understand that the color scheme is meant to set a very dull and drab tone, but I think there was enough room to convey that emotional setting while taking a few more risks.

But then, both Taylor and Loughridge bounce back as we enter the second half, especially given that the supernatural themes are more dominant. I’ve already said Freddy is a fave, but his character design really stands out in terms of explaining Taylor’s skill. In earlier pages, he gives us supernatural-horror, but then in the later portions he also gives us supernatural-quotidian. Freddy is a “monster” but he’s clearly not meant to be a frightening one. He has soft, open eyes, and wears a hoodie over a shirt with holes in it. Even without the dialogue, you can tell he is friend rather than foe. The colors show more spirit too, even with the blue overlay, and everything finally opens up in the last two scenes.

Wolf #1 is a tricky read given how varied the experience is along the way. In truth, I think the issue would have been much better served if the first half had been cut, with the necessary exposition worked into the remainder. Though the first half was ordinary (and confusing), it’s that second half that has me interested in what might happen in issue #2. I started out mostly unimpressed, but by the end, I liked it—which is the kind of journey you can have in a 60-page issue. The art, colors, and writing are rocky at the start, but become much smoother and more confident, and if that’s what the team has to offer, then I’m on board with where it could go from here.