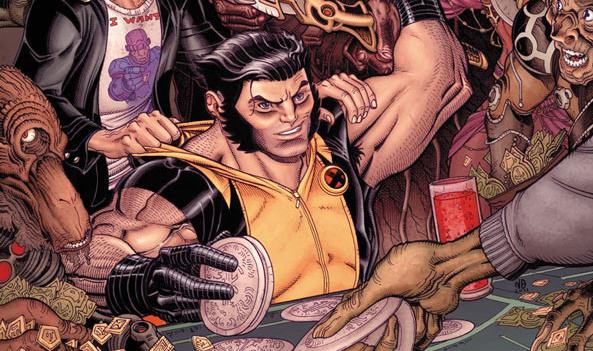 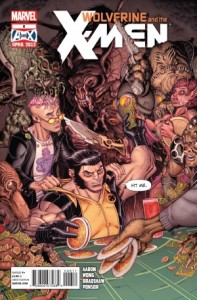 Wolverine and the X-Men has been an inconsistent series for me…Aaron’s writing has always been strong, but there have been several issues where I felt the art just didn’t match the standard of his script. Issue #6 is where it has all finally come together, and Aaron and Bradshaw are firing on all cylinders with this issue. Aaron’s scripting has never been stronger than in this issue and he hits a great balance of telling two stories at once and having both be quite fulfilling. The first story, an almost Rain Man-esque tale featuring Wolverine and Quentin Quire, provides much of the humour in the issue, but really gets interesting toward the end. The second thread is really the meat of the action in this issue as the drama surrounding Kitty’s condition really comes to a head and the action becomes fast and furious. Aaron writes both threads well, weaving in and out of them with expert timing which leads to an overall sense of heightened danger at all times. The tension grows page by page and Aaron ends the issue with an excellent pair of cliffhangers to make me want to have issue #7 in my hands right bloody now. I really cannot praise this script enough, Aaron is earning his stripes as a Marvel Architect with high calibre work like this.

On art detail Nick Bradshaw brings some of the best art I have ever seen by his hand. There are times when his style is not my favourite, but everything clicks in issue #6 and he draws an extremely diverse crowd in bizarre locales flawlessly. The layouts are interesting, the pencils are precise and the diversity of characters he draws well in this issue astounds me. This is one of the best penciled issues I have read this month, hands down.