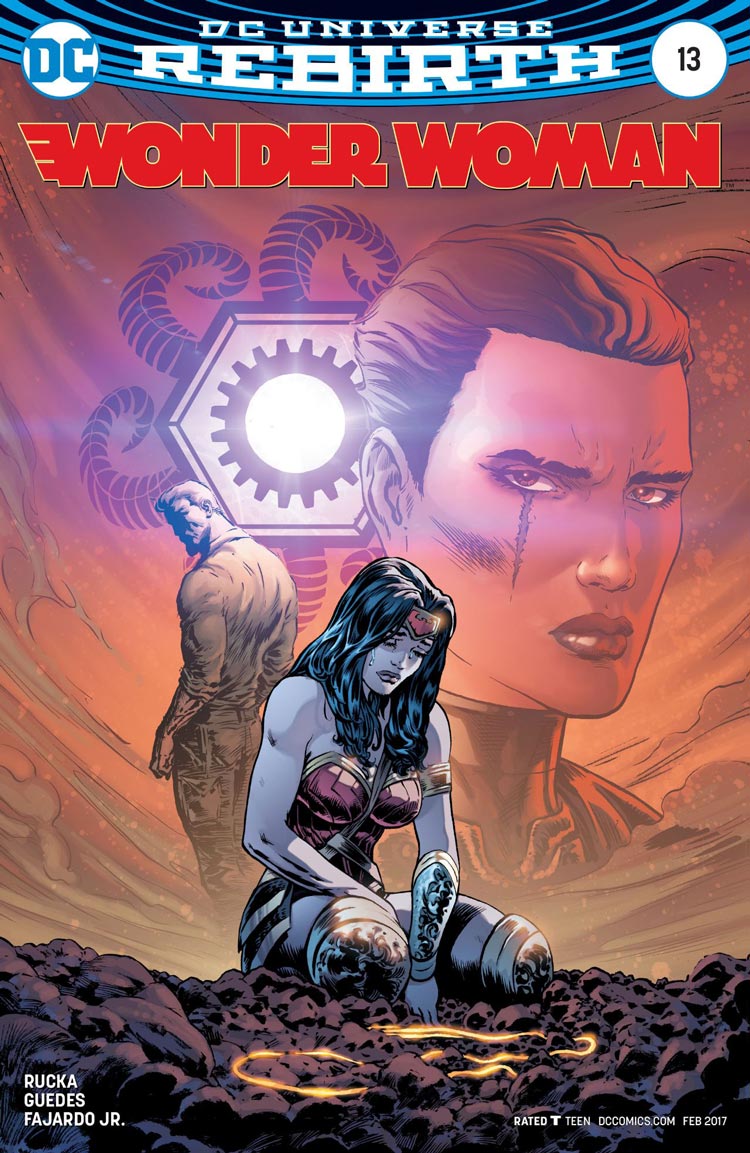 Imagine just realizing, finally, with certainty, that everything you’ve experienced with your family for the last ten years has been a lie.

With the revelation that she has never — truly — been home to Themyscira since leaving with her “survivor,” Diana has gone catatonic. And at precisely the wrong moment. Etta Candy and Barbara Ann Minerva are missing, presumably at the hands of Sasha Bordeaux and Doctor Cyber. Veronica Cale has also sent Marina Maru — Doctor Poison  — to capture the Amazon Princess. This leaves Steve Trevor — the Survivor — to make sure they ALL survive.

One of the questions I’ve had in the back of my head has been how the creative teams would manage the shift from one story arc to the next. The bimonthly structure, particularly with one artist staying and another leaving, means we have some question about how to keep each story separate, but still play off each other in the cleverest of ways that Rucka has managed so far — even with narratives occurring up to ten years apart.

This bridging issue, more so even than Bilquis Evely’s focus on Barbara Ann Minerva mid-Nicola Scott arc, functions both to get us to the next story arc with lots of Easter eggs and story cues, as well as a narrowing in on Steve Trevor’s thoughts and feelings about Diana. It’s a narration we tend not to get when Diana is fully capable and leading the narrative charge, but it also doesn’t reveal much more about Trevor than we already know.

In some ways, that’s a blessing. This man, unlike most, doesn’t hold back. He wears his emotions on his sleeve and takes honesty — at least in his relationship with the women in his life — seriously. But it leaves this particular one issue story at a disadvantage. With nothing much to discover about Steve, we’re left only with the gap-filling.

The re-introduction of a classic villain with a more militarized twist. The physical movement off this no-name rock in the center of the Black Sea. And setting up Diana Prince’s new status quo for the next arc. It’s all necessary and opens up a tons of questions for what’s to come, but doesn’t allow for some of the emotional moments we’ve gotten from both timelines to date to come through. Steve, in particular, always seems to work better for me in tandem with Diana, not directing the action on his own.

With the break between arcs, it also seems reasonable to have a guest artist pop in and alleviate timelines. With Renato Guedes jumping in, we get a little less lyricism than we do with the series’ other three pencillers, and far more straightforward story telling in panel layout and imagery. It’s almost what happens when you shift the narrative from someone with magical sight like Diana to a more militarized, realist POV in Steve Trevor. In that sense, Guedes’ work is pretty perfect for the story he’s telling.

But it definitely feels weighed down by comparison to what has come before. Facial structures are harsher, less three-dimensional, and transitions a little more awkward. It feels right for a depicting a military mission, particulary given Guedes’ use of shadow in lowlight and the jungle. It’s simply lacking the wonder of it all.

For his part, Fajardo has some beautiful moments, particularly in depicting the starry night sky, but the issue as a whole doesn’t seem to have a palette consistency that makes scenes flow from one to another. With cool blues opening to greys leading to blue greens with red highlights, eventually to orange backgrounds, it just feels like each scene was rendered separately. And as much as I appreciate Trevor’s bare torso highlighting each scene, it seems to defy the overarching color scheme of any given moment to be the brightest spot on the page. It feels odd, although gratifying from a prurient standpoint.

Every book has a transition moment and Wonder Woman #13 is theirs, with Rucka getting the cast — and his readers — where we need to be for the next big move and arc. Guedes and Fajardo ultimately serviced Steve Trevor admirably, just maybe not Wonder Woman. As part of the greater scheme of things, however, this issue does a great job of shaking up the status quo and making me even more excited to see what’s at stake in just 30 days as “The Truth” begins.