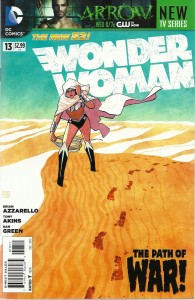 In the aftermath of Wonder Woman’s confrontation with Apollo and her other brethren over the fate of Olympus, both parties head back to their respective corners. The Gods convene a family reunion to discuss recent events, and Diana learns of yet another half-sibling who may be able to help retrieve Zola’s child from the grasp of Hermes and Demeter. Enter: Siracca — the Wind.

Azzarello continues to weave a family drama the likes of which we rarely see in super-hero comics. Taking the best attributes of the soap operatic tradition and blending them with the gravitas of Greek mythology, Wonder Woman manages to still find that place where interpersonal drama is high stakes action, all by itself. This is not to say this issue is without some moments of killer combat — as Diana plays bullets and bracelets not once, but twice in the course of the issue. The true moments of drama, however, come in those moments in-between, particularly as the “Last Amazon” (called so by Apollo himself) travels across and underneath the sands of Libya in search of her demigod sister.

What differentiates this issue from most of those that came before is a deeper study of Diana’s personality and reactions to those around her. After months of exhibiting a slightly steely exterior, here we see a hero in her purest form — a protector of the innocent (and not so innocent), a warrior with her heart laid out alongside her sword and shielding. To see Wonder Woman shift so effortlessly from vigorous confrontation to affectionate protectiveness is to see a writer that gets Diana’s core character. Lifting that small child into her arms with a promise to protect her at all costs says more about the wonder of Diana than any bracelet tricks. And Azzarello knows it.

Akins does a great job of maintaining the flow of this particular story in Cliff Chiang’s absence.  I must commend DC’s editorial team on recognizing the need to maintain an artistic vision even while giving the main series artist a chance to get ahead and keep schedule. Akins may not live up to Chiang’s crisp perfection across every single page, but there are some penciled moments in #13 that absolutely stunned me. The introductory three pages (somewhat still a bit of mystery — although as with many of Azzarello’s subplots, I have my own theories to their revelations) are beautiful beyond words, and set a foreboding tone for the months to come. Surely, nothing this past year has been easy for Diana, but I suspect the family drama is far from over. All the better for us.