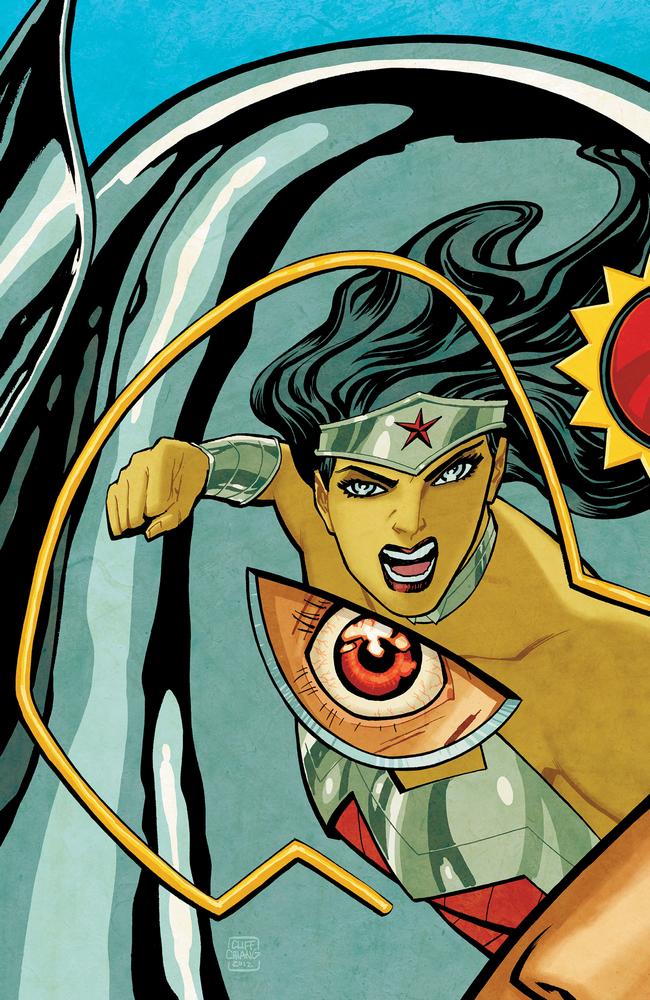 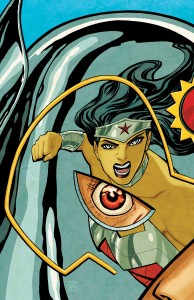 Four months ago, when Cliff Chiang gave us a glimpse of Orion’s silhouette entering a boom tube at the end of Wonder Woman #12, I was nearly falling over myself with anticipation. Between Justice League and Earth 2, Apokolips has played a big role in the early stages of the new DC universe, but Azzarello’s promise of New Gods indicated that New Genesis was finally going to have a role to play.

Forth months later, even though Wonder Woman #15 finally brings Orion to Earth, I still feel a bit like I’m waiting for that promise to be fulfilled.

After Hermes’ betrayal at the end of Wonder Woman #12, Diana has been gathering resources to help find Zola’s kidnapped child. While her aunts and uncles from the Greek pantheon mostly withdraw to adjust to Apollo’s new order, Diana has found herself reaching out to her half siblings, not all of whom get along, and not all of whom are happy with the fact that Diana has offered sanctuary to Hera after Apollo stripped her of her power and immortality. Sometimes this leads to powerful moments of sibling rivalry and compassion, such as when Diana and Siracca compete over who has suffered more from Hera’s wrath. Sometimes it can feel like there’s just a lot of sitting around.1

One of the ways that Azzarello conveys the unique dynamics of Diana’s new family is by constantly having characters finish each other’s sentences. It’s a brilliant way to show the repetition and familiarity that can arise from a family of immortals as well as the constant struggle for power. In this family, not only has everyone heard it all before, but there’s a never ending battle for the last word. While this can make things downright confusing to anyone outside the family — that is, anyone who doesn’t know the whole story already — Azzarello usually overcomes this by making Diana the newcomer trying to navigate the long and tangled history that everyone else already knows. This both puts the reader in a position to identify with the title’s lead character and provides a point of entry into the story. Even so, every once in a while it can feel like having a holiday dinner at a friend’s house, listening to someone else’s family fights. Sometimes it’s fascinating to just be able to watch. Sometimes it’s just tedious.

It’s fair (and probably wise) for both characters and writers to get a bit of downtime after world-shattering conflict, reversals, and changes in upper management. Without quiet moments, you can’t really build tension, and even intense action can tend to feel a bit flat. After three months (plus a zero issue) of slow build, however, Wonder Woman’s characters are starting to feel antsy. As Zola and Hera observe, even the nicest hotel can start to feel stuffy. For all the posturing (and at least two flying leaps), not a single punch lands in Wonder Woman #15.2

With Darkseid’s son and Ares’ greatest pupil on hand, that’s a situation that can’t last. And that’s without even mentioning Diana’s apparently oldest half-sibling, who spent the last 7,000 years tunneling his way out from the center of the Earth and is currently chilling in the Antarctic. Azzarello clearly has the long game in mind, and some big pieces on the board. It looks like they’re just about ready to come into play. I’m (still) looking forward to it.

1. Although it must be admitted, that with Azzarello’s scripting, it can be fairly entertaining sitting around. Done right, I could read a whole issue of Zola and Hera squabbling. (Spin-off, maybe, DC? Eh? Eh?)

2. One person does get hit with a TV remote. SPOILER ALERT: It’s neither Diana or Orion.