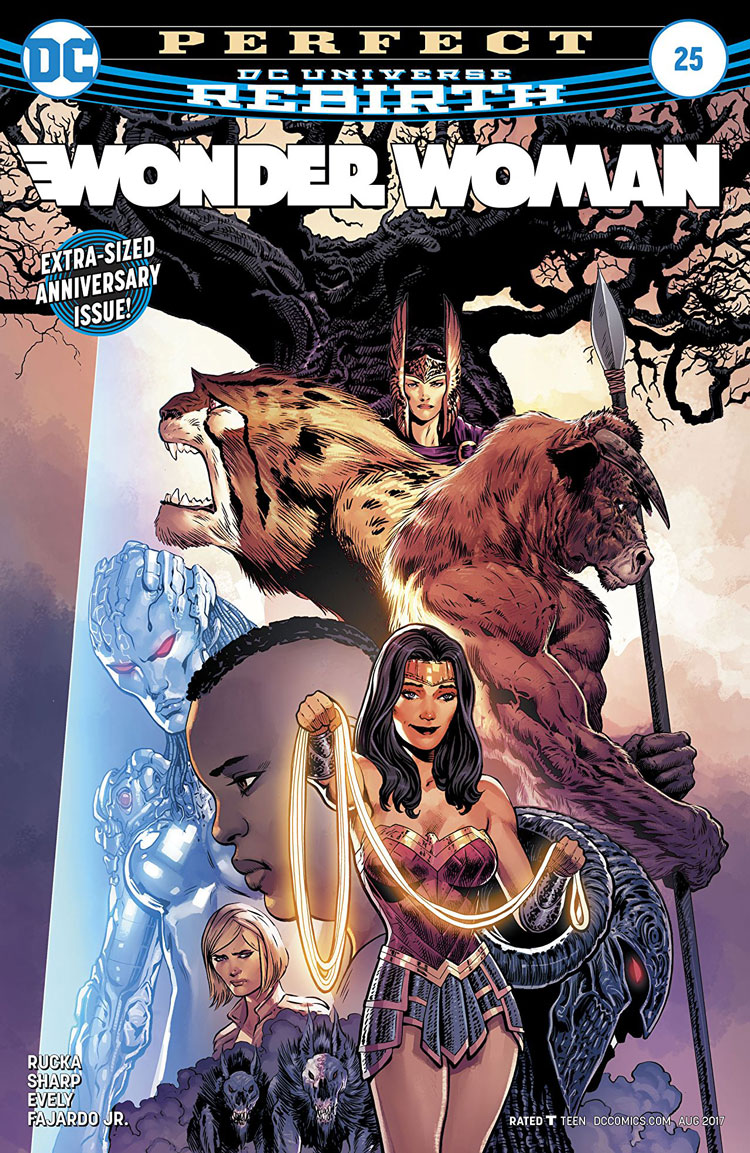 The story that began in Wonder Woman: Rebirth #1 ends here, as Diana seeks answers to why her life has been turned upside down — and what she must do next without the Golden Perfect at her side. From allies to enemies to lovers, all those who have stood by Wonder Woman’s side must now seek their own resolutions.

Wow. So, this was a bit of an experiment.

Not the 27-issue run executed with flawless precision by Greg Rucka, Liam Sharp, Nicola Scott, Bilquis Evely, and company. No, that was no experiment. They all knew exactly what they were doing when they put pen to paper and rendered out the story of a woman who is at once unreservedly godly and intensely human. The poetry of this story of Diana’s loss — and the acceptance of that loss — is carefully constructed, woven even, like a fine thread.

And like fine threads that are wrapped around themselves to make something nearly unbreakable, so too have all the storylines these master creators woven together over the course of a year’s time combined to make something invincible, inspiring, and eternal.

No, the experiment was mine — an attempt to write on every single issue, every other week for a year, and find some new corner or crevice to investigate. I hadn’t intended it at the start, truly. But once you start a boulder rolling downhill, you either get out of its way, or run faster than it can pick up speed.

I chose the latter.

And in truth, the creative team made it easy, from start to finish, by probing truths about Diana and her friends (even the ones that didn’t think they were) that were always there waiting for me, and I could only have found this way. By hanging in and riding the currents of the story they so artfully unfolded for us.

And here’s where it ends, with a look at the relationship between Diana and her lasso, the Golden Perfect, the embodiment of truth. So, where her anger seems almost supernatural at the start, caused by this broken connection, this deep loss, we are soon led to a more reasonable explanation. Rucka’s Diana is, after all, human, Zeus’s daughter aside. Now allowed a moment to breath, she is flooded with the pain and hurt that adventure wouldn’t let her feel. And the resulting anger that even Batman can’t ignore leads her into what is unquestionably the truest moment in the book yet.

The gods remain inscrutable, but retain all their glory — particularly in Liam Sharp’s hands. The artist’s lyrical rendition of the lush paradise that accompanies Rucka’s words coming from the mouth of Athena lifts the spirits, just as the return of Diana’s lasso does to her soul. It’s a absolutely stunning sequence, for both the way in which Rucka’s words pace out against Diana’s expressions, and for the moments Sharp gives us in-between to be properly awed.

Evely’s handling of the reunion between Diana and Steve, whose kindness and reverence for the woman he loves is as rare a magic as that of the gods, leaves the ending of this issue with no bittersweetness. No, Evely plays the final moments of this tale, which began with violence and anger, with softness and love. From the swirl of rose petals and the curls of Diana’s hair, we can feel everything begin to slowly unwind, slow down, and at last, rest.

We’re left with a final page from Evely and expert colorist Romulo Fajardo Jr. that radiates the glow of love and peace, not from a lasso, but from a woman who’s finally come to terms with the life she has. This is about contentment, as all sense of loss fades away into the night.

After all is said and done, after 27 issues that tell a powerful, personal tale about women and how they do or do not let themselves be defined by their losses, I can honestly say I am satisfied. Not satisfied enough to stop counting the days until this creative team can reunite to tell their next great tale, but comforted by Diana’s resolve, reunion, and relief. “Perfect” is indeed the apt title of this tale, and the right note upon which to rest this tale. Perfect. Yes, perfect.