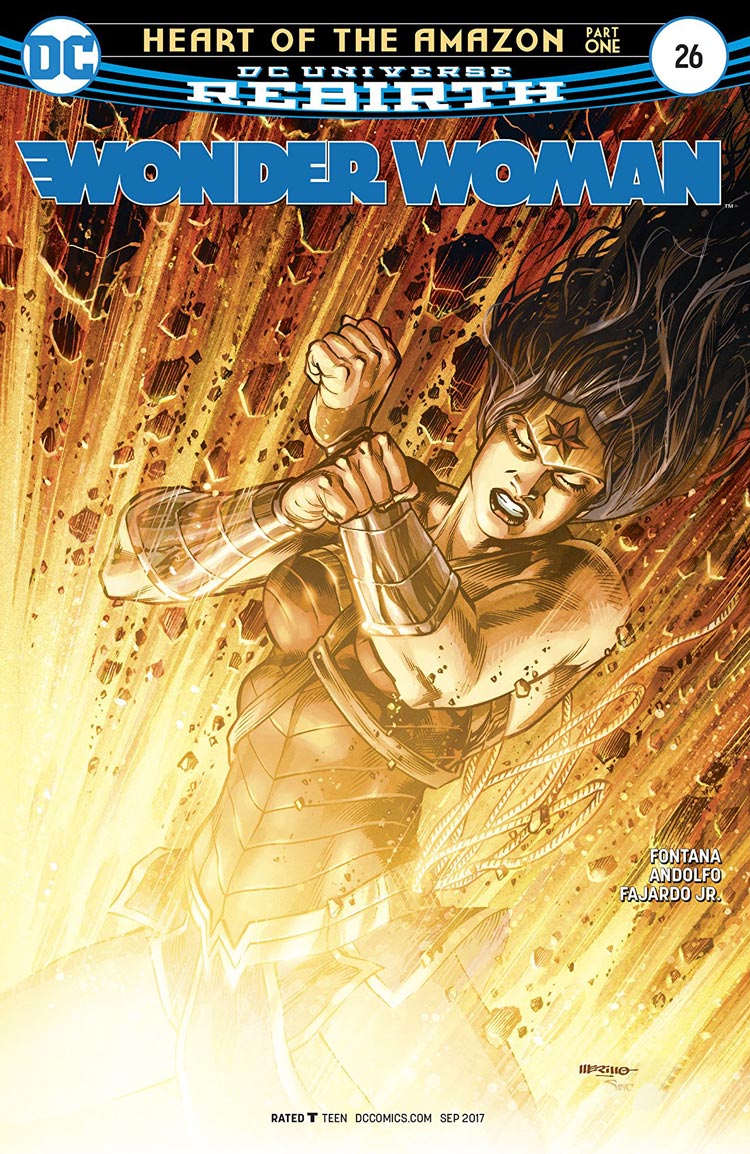 I want to be excited about the new era of Wonder Woman dawning in the wake of the spectacular success of the movie. But instead, I’m feeling a deep ambivalence that would have settled into outright antipathy if not for the level of fun and emotion that Fontana and Andolfo inject into their debut issue.

For a very brief time, there was a sense of almost endless possibility for Wonder Woman stories that kicked off with the digital first revival of Sensation Comics that blossomed into DC Comics Bombshells, The Legend of Wonder Woman, Wonder Woman: Earth One, and Wonder Woman: The True Amazon. These brought a range of idiosyncratic takes on the Amazon Princess unlike anything in her 76 years in print. For the last eighteen months or so, it seemed like Wonder Woman was finally entering the prismatic age, but that window already seems to be closing.

At first glance Wonder Woman #26 reads like a story originally written and drawn to follow Greg Rucka’s first tenure on the title, not the one that just ended, which, for some readers, will be a source of joy. The bright, kinetic manga influence that Andolfo brings to the title is something that DC editorial should have been looking to explore with Wonder Woman in 2006, if not sooner. And it ought to find a long term home somewhere in the line, especially since there’s never been a serious attempt at exploring Wonder Woman using the magical girl paradigm.

For Fontana’s part, the conceit of Diana working as what amounts to a military contractor attached to a partnership between the US army and a private tech firm feels native to the 2003-06 era of DC comics that leaned heavily into military fiction obsessed with interventionism typified by Rucka’s Wonder Woman, Brian Azzarello’s Superman, and Ed Brubacker’s tenure on The Authority.

In that sense, the setup Fontana provides for Diana feels exactly like What’s So Funny About Truth, Justice, and the American Way?, arguably the Eisenhower Farewell Address of superhero fiction, predicted. We’re so entrenched in the era of the superhero-as-soldier archetype that Wonder Woman in the role of a military contractor feels, if not right, then at least correct.

There’s a melancholic quality to seeing Diana’s approach to international relations being reduced to a reactive, purely warrior-like role knowing that, not that long ago, she had carved out a diplomatic role as ambassador from Themyscira to both The United Nations and the United States of America. There’s definitely a strong sense of verisimilitude in portraying a female heroine in the kind of reactive position she currently occupies, because it’s exactly where mainstream white feminism has believed itself to be since Donald Trump’s misogynist rhetoric and personal history managed to prevail over Hillary Clinton in the 2016 US Presidential election.

Consciously or not, Clinton exerts a heavy psychic influence on the issue — from Diana’s disconnect with the people and world around her after absorbing the trauma her work defending refugee camps has left her with, to the dissonant choice of wearing an opaquely black pantsuit to a wedding. Wonder Woman dressing for a funeral at a wedding is a uniquely bleak image that doesn’t quite mesh with the sense of play inherent to Andolfo’s art.

Top to bottom, the issue is about suppressing a certain spectrum of emotion that speaks to how women are socialized to do so in order to achieve success in male-dominated spaces. We are not to appear overly emotional, yet are inevitably torn down and accused of suppressing womanhood in a cynical Lady MacBeth like play for power. Again, like the arc of Clinton’s career in the public spotlight from First Lady through to Secretary of State and Presidential hopeful.

Fontana and Andolfo deconstruct and rebut that Lady MacBeth moment in an incredibly visceral and heartfelt way through flashbacks to Diana’s youth and a doll she carried with her named Agape (shortened to ‘gape in her childish vernacular). Agape, in Hellenic Grecian and Christian terms, refers to the highest and most divine manifestation of love, which Fontana and Andolfo explicitly feminize through both the gender of the doll and Themysciran society in general.

Through overheard conversations between Hippolyta and Antiope, little Diana finds out that there’s a debate over her doll and whether it’s too immature for a girl with a destiny to become a warrior. As a result, Diana tearfully locks Agape into a wooden chest and throws the key into the ocean. It’s a fantastic piece of allegory that ties together the source of Diana’s inner turmoil and just how early women internalize harmful constructions of emotion and gender.

The tragedy of it is that it’s Wonder Woman being used as the character to express it. It feels like there’s something fundamentally lost when even Themyscira cannot escape the reach of this kind of patriarchal thought. Themyscira, while never completely without internal strife or struggle, was initially conceived of as a utopia for a very specific reason: to provide an escape from patriarchy and its social conditioning so that it could provide a model to aspire to.

To me as a trans woman, Diana locking Agape away is more than just a metaphor: it’s literally biographical. It’s a piece of storytelling that has more meaning and resonance to me than any of the largely fumbling attempts that cisgender writers and artists make at portraying the inner lives of trans women in contemporary comics. I just have a fundamental disagreement about making Wonder Woman the character to portray the moment. While there’s plenty worth discarding from William Moulton Marston’s original conception of the character, most notably the racism and gender essentialism that marred his work, that thread of utopianism is the one most worthy and necessary to cling to.

Instead of feeling like I am or could be Wonder Woman as I am now, I want to see her just ahead of me and every other woman who draws strength from her image. Empathy is a powerful tool and there is an acute need for women, in all of the spectrum of our experience, to feel seen, heard, and reflected in media. We absolutely, even desperately need fiction that can transmute the psychic damage of Clinton’s brutalizing in the public sphere has done to women who saw pieces of themselves in her into stories like this. But we also, and just as desperately, need fiction that charts a path out of the wilderness we find ourselves lost in now.

The latter is the fundamental and original purpose of Wonder Woman, and a quality that has been eroding at a faster pace than the polar icecaps in recent years. It’s unfortunate enough that the film is about a descent into despair at the realization of the agency of evil that both men and women possess, but Fontana arrives on Wonder Woman with the title still in the midst of recovering from the lasting damage of the 2011 reboot.

Under Brian Azzarello and Cliff Chiang, the utopian vision of Themyscira was replaced by a history of rape and slavery that went far beyond recognizing the agency of evil in women. It chauvinistically, if not outright misogynistically, project the notion that left to their own devices, women would do nothing more and nothing less than replicate the ravages of colonialism in their own attempt at nationhood.

The history that Azzarello and Chiang created for Themyscira out of the New 52 reboot was a replication of American history in explicitly gendered and de-racialized terms. They transferred the mechanics and trauma of chattel slavery that underwrote American independence to an underclass of mostly white-coded male Themyscirans who were both the product of rape and sold to Hephaestus as slaves.

It’s a history that was further problematized under Meredith and David Finch when an attempt at resettling the male Themyscirans ended in a genocidal bloodbath that carried with it the underlying philosophy of gender essentialism that justifies the marginalization of trans women in contemporary society.

That women possess the agency of evil is not in question. Nor is the complicity of white women in the ravages and legacy of American chattel slavery. This is a history and a reality that absolutely requires examination and reflection in media, but a white male writer dismantling popular culture’s most enduring attempt at projecting a feminist utopia free from the oppressive presence of patriarchy does not represent that kind of white feminist self examination.

It’s a petulant and deeply insensitive act of sabotage.

So while it’s cathartic and heartening to see Diana’s childhood being incorporated into the narrative with a sense of innocence and joy attached to it that connects her to a little girl in the present, it’s difficult to cede any ground in the desire to see Themyscira re-established as the oasis from the ravages of toxic masculinity that it can be and has been before. Of course this is only the first issue of Fontana and Andolfo’s arc, so we very well could be headed towards a resolution of the flashback portion of the story to a synthesis of emotion and femininity with the warrior aspects of herself and a divestment from military involvement as a means of effecting change.

What’s absolutely clear about Fontana’s debut is that despite the clunkiness of some of its moving pieces, there’s a thriving and artfully conveyed emotional undercurrent that speaks volumes to the queer and female readership of the title. Which should always be the first priority of a Wonder Woman story.