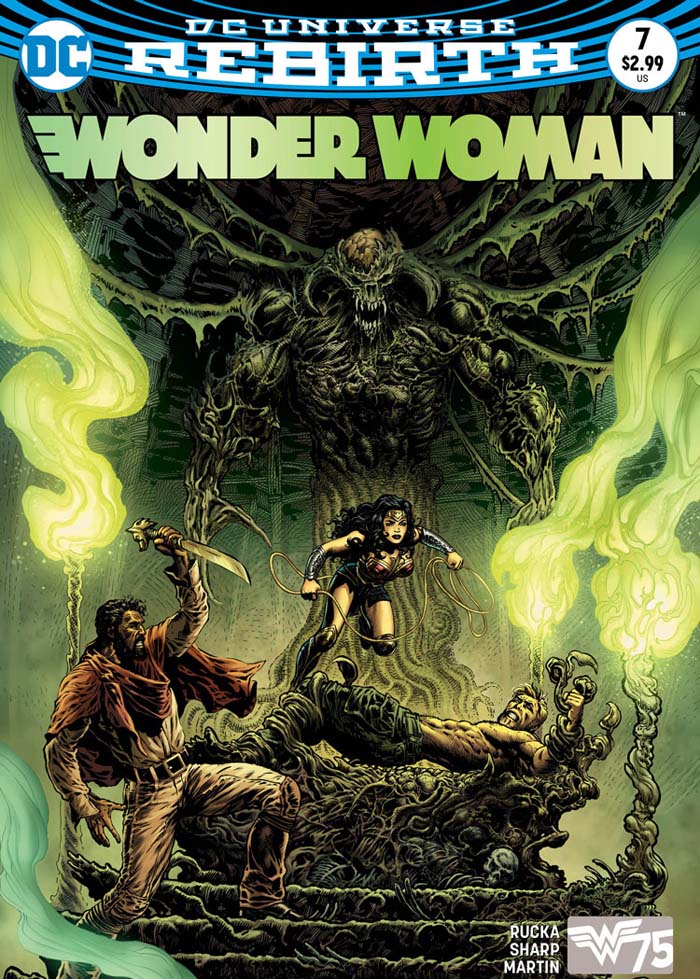 The first story arc — “The Lies” — reaches the end of its second act, and the truth begins to win out. The secret Urzkartaga has been keeping from Barbara Ann threatens to undo him, and empower the very women he seeks to enslave. Will Diana and her mirror companion the Cheetah win out over the god before them — especially when it’s Steve Trevor’s life that hangs in the balance?

In terms of villains, the Cheetah has never felt like the true mirror opposite to Diana that we have seen well developed in the rest of DC’s Trinity. Superman’s an alien whose sense of morality drives him to protect humanity, while Lex Luthor is a human whose corruption and selfishness drives him to want to destroy anything he deems alien. Brawn vs. Brain. I get it. Batman’s opposite number is the Joker — a madman whose reaction to pain and suffering is laughter and frivolity, while the Batman uses it to motivate the most serious endeavor of his life — the absolute protection of life. It’s Order vs. Chaos.

But when it comes to Wonder Woman and the Cheetah, the parallelism has always felt a bit more murky to me. They’re both warriors. They’re both god-granted, yes. But what is the core reversal to the pair? I’ve never seen it clearly.

Until now, as Rucka, Sharp, and Martin craft the Cheetah so perfectly as Diana’s most natural foil — and in doing so, throw the entire concept that one’s enemy is everything they are not out the window. Barbara Ann and Diana are not polar opposites. They are not inverse reflections. They are the same. The same. Barbara Ann’s condition as villain, as beast, is simply a result of the damage a lie can do.

And there, but for the grace of the Gods, goes Diana.

It’s such a clever parallel between an increasingly destructive Wonder Woman — one who brandishes a sword more often than her lasso — and a bestial Barbara Ann Minerva. The acceptance of the helm of the God of War, if it does prove out to be part of these lies, feels now as much a trap as Urzkartaga’s marriage ceremony. And as the narrative we’ve come to accept for years begins to fall away, we’re left with this stunning view of who these women are, and what they can possibly mean to each other.

It’s so Wonder Woman that her greatest enemy is at heart her best friend. This betrayal, not just of one woman to another, but of the truth to both, makes for the richest sense of antagonism that goes beyond simple binary concepts like Alien/Human, Brain/Brawn, and Order/Chaos. The idea that a look at one’s own failure — potential or realized — could be the dividing line between enemies is fascinating. The Batman is not one night away from being the Joker. Superman is not a kryptonite exposure away from being Lex Luthor.

From the very first page of issue #7, we see a panel construction doubling as a jail cell, eventually coming undone at the intervention of Wonder Woman. And yet, its inhabitants are the source of strength Diana purports to draw upon. It’s beautifully crafted in both sentiment and visuals, with the power of these children foreshadowing the issue’s resolution through Sharp’s clean, robust line and endlessly empathetic faces.

These moments, between Diana and the children and between Diana, Steve, and Barbara Ann, are what bring the thrilling and overwhelming power to this chapter. True, the layouts on the rise of Urzkartaga are wonderfully constructed, as if vine came alive itself to break apart the narrative panel by panel. But the interactions between Wonder Woman and those around her are the glue that holds this story together. Her visible openness and physical demeanor toward love, not destruction, is what keeps the parallels and opposition between her and the Cheetah balanced in equal measure.

And they are the places in the narrative that really give Laura Martin her best shot to shine, as the glow the colorist adds to Diana and everyone she interacts with lights up the story like nothing else. It’s very true that “The Lies” is a dark and twisty story — one steeped in the psychology of mythology, truth, and lands that seem to represent both at once. But Martin’s contribution to the atmosphere keeps Diana and the Cheetah as warm centers to a darker world, pulling everything Rucka and Sharp want to accomplish into focus.

It’s always magical to uncover a depth of thought and vision from a creative team as a narrative unfolds and not have to be told outright what we are meant to understand. As Rucka, Sharp, and Martin collaborate with Nicola Scott to build this richer sense of who Diana is and what risk she faces in embracing the word of her patrons, I am left in warm awe and grateful respect for their sophistication. Wonder Woman continues to be the emotional center of my reading experiences this summer and remarkably, blooms a little more every issue where so many other series would simply be dying on the vine.