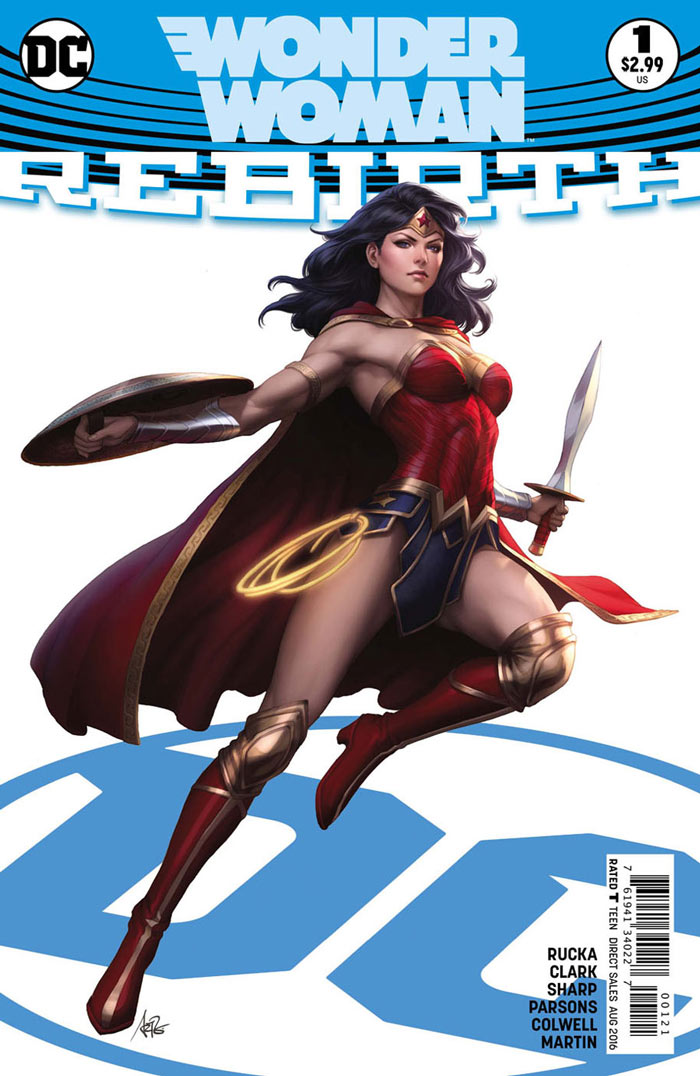 Who is Wonder Woman? That part we know. Ambassador of peace. Warrior princess. Friend. Worshipper and worshipped. The real question is, what is the lie underneath all those truths? What is real and what is a fiction? Make no mistake. Diana is going to find out.

This month may be the most meta-textual one in all of DC Comics history — and that includes a year’s worth each of Final Crisis and Multiversity. In some ways, it’s the true culmination of fandom reaching into the depths of the comic book industry, both as converted creators and critics, plucking out the things we no longer want to see and rallying for the fantasy world that’s been lying in wait the whole time.

Viewed through that lens, Wonder Woman: Rebirth #1 is a telling moment for the Amazon, after several years (how many depends upon whom you ask) of charlatanism and creative warping. It’s no wonder we get a glourious double-page spread from initial penciller Matthew Clark (“before”) that mimics the Infinite Crisis-era Superboy Prime. Someone has been messing with Wonder Woman’s story, and it isn’t the Cheetah or Ares this time.

And Rucka’s narration recaptures that elegant, wise voice of Wonder Woman that’s been missing in recent years — that sense of calm discernment that is complex and deep on one hand, but refreshingly transparent on the other. Diana, particularly Rucka’s Diana, is not an enigma. And we’re not led to believe she is either. But the events and conditions that wrap themselves around her like a cloak, that chain her neck like a meta-choker, are not nearly so easily to see clearly.

It’s a simple, but poetic moment when the transition to Liam Sharp’s fantastical — almost metaphysical — renderings take over. Sharp (“after”) reminds us with his rounder forms and hyper-detailed atmosphere that Wonder Woman always was this mythological being, trapped inside a mold of something else that just needed to be cracked back open. We’ve been starved for color, for texture, in Diana’s world, and Laura Martin weaves it all back in like a rush of water, soothing, but scary at the same time.

Something epic is starting here with Rucka taking us into the depth of what the last ten to twenty (maybe even thirty) years has meant to Wonder Woman, both as a person, an icon, an IP, and something far far greater than that to so many. This issue is only the tip of the iceberg, and in that sense, it feels a little tenuous. Like a prologue and aftermath all at once, the introspection behind Rebirth #1 is comforting, but it holds little in terms of story.

Maybe this is exactly what we need to make the break between what has been and what has been held back: that sheer, radiating goodness manacled under silver bracelets. Its metatextual feeling, combined with stunning art on both ends of the narrative spectrum, from Clark and Sharp, is just another example of work comic books can do that so many forms of communication can’t.

There’s a language and layering to storytelling that just doesn’t exist anywhere else quite as much without descending into goofiness. The most sophisticated television can pull it off, but only in measured doses, like with Frank Underwood’s camera talk in House of Cards. But comics are a medium that weaves some of its own failures and devices so easily into the page itself — and it feels so right, as if we are always-already part of the ongoing story. It needs us to exist too, just as the Olympian Gods needed the Amazons.

And so it does.

A strong character study-esque start to what already seems to be the next dramatic era of the Amazon Princess’ nearly 75 year history, Wonder Woman: Rebirth #1 is a welcome return for Greg Rucka, a nice send-off from Matthew Clark, and a lovely revelation from Liam Sharp. Thank goodness we’ll have the next installment in just two weeks.