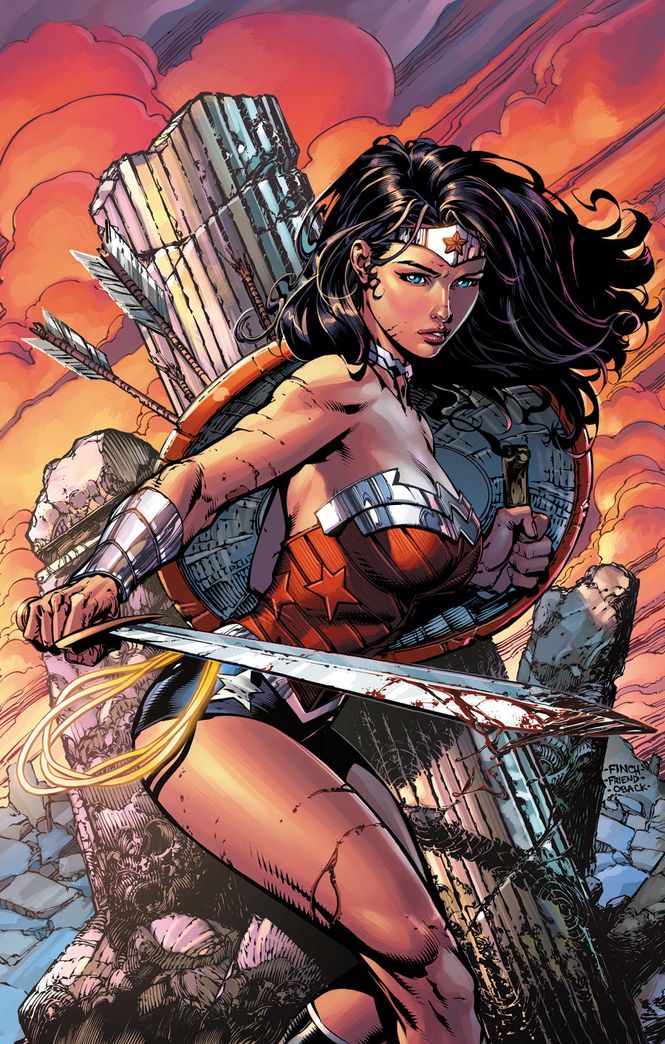 I’m going to just come out and say it: this volume of Wonder Woman is terrible.

A bold first statement, but it is the truth. The plot diminishes the strength of Diana, spins in narrative circles, and is accompanied by generic dialogue. Diana’s relationships with the other Amazons and the Justice League are depicted in the most shallow terms, and the “major” events of the arc are completely anti-climactic and predictable. This is one of the worst takes on this character I’ve read, and at a time when Geoff Johns is writing such a fantastic Diana over in Justice League, that hurts all the more.

The primary plot of this collection stems from Diana being torn between her roles as Queen of the Amazons, God of War, and Justice League member. This internal conflict is solely examined by constant questioning of Diana by the characters around her. Meredith Finch makes it obvious through the constant barrage that Diana could never be capable of handling all these things, so that even when she does come through and succeed, the character is so undermined that any victory feels temporary.

Her strength is diminished throughout the volume and this Wonder Woman is certainly not the member of the “Big Three” that we’ve seen in other DC titles of late. I can buy a character feeling strained, confused, and torn by duties, but Finch doesn’t dig into this beyond a shallow reading. She simply states throughout the volume that these conflicting roles are a problem, and that is that. The result is a story that is sadly cliche.

Wonder Woman is a powerhouse, and at no time in this entire volume did I feel that (save for one moment when she irrationally lays into Swamp Thing.). Diana is the God of War. She is a founding member of the Justice League. She sparred with Superdoom. The conflicts in this volume read as so basic and nonthreatening that I didn’t feel like she was ever presented as a force to be reckoned with.

One plot thread is, quite literally, resolved through some after-school-special dialogue and Cyborg working some of his magic. Thousands of people are slaughtered and the storyline is simply dropped after a heart to heart between Diana and her foe featuring such stock dialogue that it doesn’t even showcase Diana’s peaceful nature. If this story was meant to show that a God of War can do more than respond with violence, it missed the mark through poor execution. Likewise, the entirety of the Donna Troy storyline feels forced, unnecessary, and a waste of potential drama for all characters involved.

The artwork in this volume does nothing to help the script, and at some points probably hinders it. I actually found better chemistry between Meredith Finch’s script and Goran Sudzuka’s artwork in the annual at the end of the volume than between the Finches in all the issues prior. David Finch’s work in this volume is inconsistent, and his take on Diana lacks emotion and heart. This volume looks to be filled with a myriad of pin-ups, and, like the cover, they make Diana seem like a child who is confused on the battlefield, not the Queen of the Amazons and God of War. Those are not light titles, but I feel they are not represented properly in the artwork.

I’ll admit, I don’t even know where to start with the visually horrible way classic and much-loved character Donna Troy is introduced to the series. Quite frankly, nothing in this volume felt empowering to female readers, something that should be a given with the Amazon princess. Wonder Woman and the Amazons are not characters that are difficult to show as strong and beautiful, and yet Finch never really achieves that in this volume.

Wonder Woman Vol. 7: War-Torn is a failure in about every way a volume of a high profile character such as Wonder Woman can be. It actually eroded the strength of the character in my eyes. Choices made by the art team lead to visuals that were offensive and, even when I wasn’t angered by what I saw on the page, the only word that comes to mind is “mediocre”. This volume does nothing to build the legacy of Wonder Woman or great comics in general. I’m headed back over to “Darkseid War” as fast as I can.