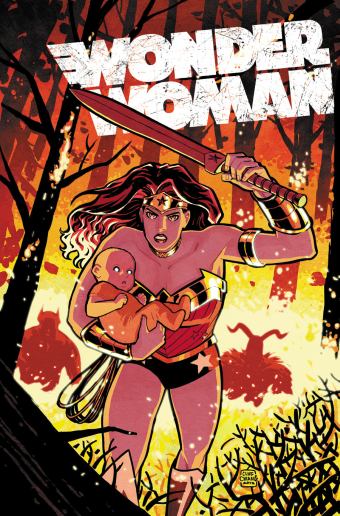 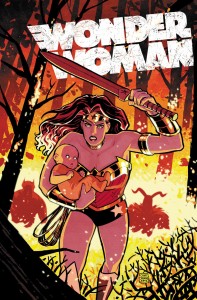 The child Diana fought so hard to protect is now gone, spirited away by the very gods she thought she could trust. So, in her gambit to return Zeus’ newest son to his mother, what does Diana do? Seek out two more of her abandoned siblings to help the cause. What Wonder Woman doesn’t anticipate, however, is having to encounter not one… but two Gods of War along the way. Witness the Amazon Princess’ first encounters with the god Ares, as well as the revelation that is Orion of the New Gods!

Brian Azzarello continues to build a brand new worldview for Diana in this third volume, but still manages to capture everything that makes Wonder Woman the unique hero she is, with subtleness and grace befitting a princess. It would be so easy to deliver a re-envisioned warrior who blindly accepts her newfound demi-godhood and abandons the humanity that is core to her being. Instead, what we find is a woman for whom mercy is at the center of conflict, patience is a virtue, and the care for others trumps battle time and time again. It must be frustrating for a God of War to come up against such an immovable morality, as centuries of slash and burn strategies course through his veins, however pickled they may be in his old age. And yet, War seems to have an honest admiration for the pupil who defied him, who took what he had to offer but refused to implement his lessons as a God of War would. Some critics may believe Diana to be an enigma — a puzzle that needs to be solved — but her motivation and core beliefs could not be more transparent, and especially under Azzarello’s pen. 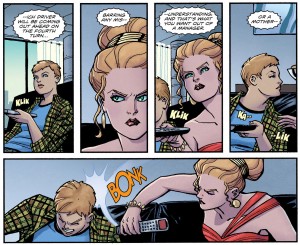 Key to this, of course, is that the writer keeps giving us moments, however quiet, that reinforce Diana’s foundations implicitly. Immediately expressing concern for Harvest’s physical well-being, despite her role in stealing friend Zola’s newborn child; granting mercy to the Minotaur and, moreover, earning his respect upon completion of their battle; and reaching out to her long lost sister Sirracca with love no matter how she devastating her attacks — all moments of clarity from the creative team and proof on the page that they “get” Diana, right down to her heart. And Azzarello’s treatment of the supporting cast is no less brilliant, as Strife once again is a delight to witness even for a few short pages, and the relationship between Zola and a now human Queen Hera begins to show moments of playful camaraderie. But most engaging of all has to be War himself, the tired man who has banked wisdom in his time, and is a far cry from the maniacal juggernaut we’ve seen Diana face in the past. 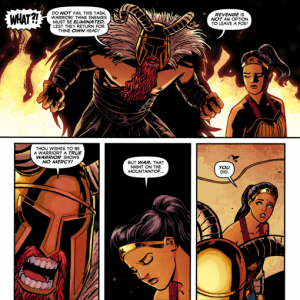 Chiang continues his exceptional work on the title, starting with the “zero” chapter, an spoof on early Silver Age Wonder Girl tales of Diana growing up. The dialogue and narration certainly give it a tone, but it’s Chiang’s slightly adapted artwork that pulls the reader back 60 years to another time, when an adventure about capturing a Harpy egg for one’s birthday cake could be found on the comic rack. Akins can’t quite match Chiang’s perfection in this volume, although the juxtaposition of the artists is smart for the full collection. There’s just something about the way Chiang illustrates Diana’s eyes and gestures that transcends the page. And his updated design for the New God Orion is inspired, both modern and simplified in a way that would make Jack Kirby proud.

A standout end to Act 2 for a storyline still moving along a year and a half into DC’s New 52 publishing line, Wonder Woman Volume 3 doesn’t have any big bang moments, but is instead filled with tons of subtle characterization and new aspects to the Amazon’s legend. This is Diana the protector, the peace-bringer, amid a web of those who would bring war, and I can’t think of a more perfect (or necessary) place for her to be.