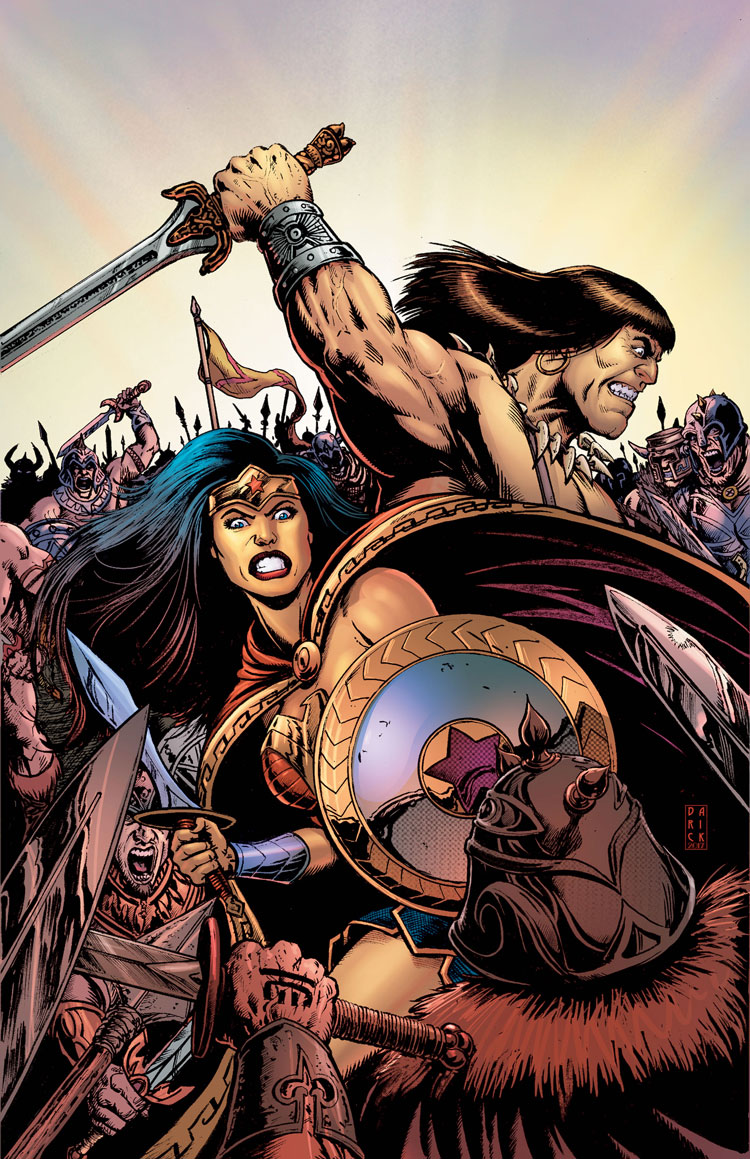 Gail Simone is writing Wonder Woman again! And Conan! Together! Just hand over your money, now, because this book is shaping up to be some of the best aspects of what makes both characters exciting, and it is in the hands of a writer who has handed Diana well in the past. While the plot is not without some minuscule shortcomings, they seem more to be issues with setting up ‘how’ Diana and Conan can be in the same time and space. Hopefully, future issues will expand on this part of the plot and turn what appears to be ‘shortcomings’ into the kinds of issues that always tend to be resolved when a plot is read in its entirety.

Right out of the gate, Simone (who has had history with the kind of genre Conan is part of, thanks in no small part to her work with Red Sonja) nails the best aspects of Robert Howard’s Conan. While the role of Conan might perhaps best be known to comic readers through the famous films, the celluloid depiction of the character played to Arnold Schwarzenegger’s stoic masculinity more than it did the character of Conan’s opportunism as was present in the novels and short stories he first appeared in. Conan was always a smart character, and Simone presents this best in the opening. If you have never gotten to check out Conan’s stories, this serves as a fine primer to who he is, a man who is as prone to let you be killed by bandits if you have no money as he is prone to saving people from bandits who do have money.

But, Conan is also a sort of romantic, in his own fashion, and that provides the mysterious set-up that makes this crossover comic work so well. No, Conan isn’t romantically linked with Diana, but there is a mystery involved with a girl who Conan grew up with that he senses is tied with Diana herself. The link that ties Conan’s emotional state to Diana’s welfare is a great hook that 1) makes Conan come off as a more enjoyable character who warrants a comic pairing him with somebody like Wonder Woman, and 2) its mystery seems to heighten the aspect of the story which this reader finds weakest, which I’ll touch on at the end.

While it takes a bit for her to appear, Simone’s return to Diana is tremendous and touches on some of her best aspects. She appears as a chained prisoner (which ties into more infamous ways she tended to be captured) in a gladiatorial pit fight, but she is no way a victim. Simone and Lopresti present her as every bit the match for every contender, even daring to try and acquire her freedom as soon as possible. Unfortunately, the plot demands her re-capture so that she and Conan can come together. While Conan has a great action sequence earlier in the narrative, Simone’s presentation of Diana is the action highlight of the piece for sure.

If there is a downside to the plot, it is simply that we don’t get the Diana we might expect, for reasons that I imagine are warranted for the fact that, without certain factors, such a meeting would come off as too weird. There is a mystery behind how and why Diana is captured and not on her island home. Am I hooked enough to see past the set-up for what it is, a set up that will be explained later?

This is Simone on Wonder Woman and Conan. Darn right, by Crom, I’ll stick around.

The art in this comic is a plethora of riches. If you have never been able to experience the work of Lopresti’s art or the rich colors of Ryan, this is a book you’re going to be rewarded for. Some artists tend to be great at certain things more than others, such as, say, faces, yet they’re poor at backgrounds. Lopresti is the rare kind of artist who is great at everything and it all sparkles. Readers get character renditions that are layered in detail, from the fabrics of clothes that ripple in the chilling winds, to exaggerated expressions of happiness or pain. Creases and musculature shine under this comic, which is a boon for Diana and Conan alike. Both are presented as the visceral, powerful characters they’re renowned as. In an almost exaggerated fashion, both Conan and Diana are presented as living statues, creatures of eternal elegance and violence wrapped up into singular packages.

What makes the lines of Lopresti sing is Ryan’s inks. While there are splashes of color present in some tunics and capes, the palette is muted and dark as befits the world of Hyperborea. The selective palette makes the rare splashes of golds, silvers and red really pop. Ryan’s colors and Lopresti’s ink pair up extremely well with the borders of the comic, something that accentuates some of the great things in this issue. There is a sequence in one of the later pages where the panel borders are vines and flowers, a depiction of Diana’s time as a child which has one of my new favorite Diana moments. She uses her lasso to wrestle a shark. A. SHARK!

With beautiful lines and character designs, a great color palette, an awesome grasp of both characters, and a promising plot (even with some shortcomings), Wonder Woman / Conan #1 is a great book that is going to be well worth the time of both Wonder Woman and Conan fans alike.