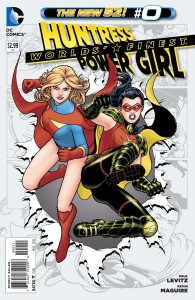 While Worlds’ Finest #0 documents Helena Wayne and Kara Zor-L’s first meeting, it’s really a story about how coming of age is inextricably linked to the end of the protective shelter of childhood. There’s plenty of action to go around, but the real tension in the issue comes from the opposing parental desires to prepare one’s children for the world and to protect them from it. (Look for Batman and Catwoman’s argument over Robin’s first time out as a superhero, and Helena’s classic teenager reaction to the predictable denouement.)

The successes (and few failings) of Worlds’ Finest come in the details. There’s Helena’s purple cape, and the design of Catwoman’s mask, both of which find resonances in Helena’s current Huntress costume. There’s the way Superman preserves the memory of a loved one, which perfectly captures the way the Fortress of Solitude has always been both monument and mausoleum, a place where the last son of a lost world can preserve the few objects that remain after everything has been destroyed. There’s the single-panel glimpse of Kal-L’s scarred back, a potent reminder of the dangers Kara and Helena face.

If I have any complaints — and let me make them quickly, because they are few — they would be that the depth of Helena’s story comes at the expense of most of the room Kara might have had for development. Also, Kevin Maguire’s art, so superb when it comes to capturing adolescent enthusiasm and disaffection, doesn’t quite live up to the issue’s moment of true anguish. To be fair, even the script in that moment is a bit of a letdown, with one word and three letters more than necessary, and the story quickly moves on to capture how in all her incarnations, The Huntress’s pain has always found more of an outlet through anger than sorrow.

In the end, The genius of the New 52 take on Earth 2 has been to take concepts and characters from the Golden Age of Comics1 and put them under the stress of an ongoing planetary war with Apokolips. The colors may be a bit brighter on Earth 2, but it’s actually a grittier and more desperate place than the mainstream DC universe. There’s an innocence to Earth 2 that’s in tune with its Golden Age lineage — it’s the kind of place where Batman and Catwoman can end up together and have the best daughter ever — but there’s a realness to it as well. Every character from Earth 2 is driven by lives and innocence lost. You could make an argument that Earth 2 is a world without original sin, where people (and heroes) really do start out pure, but it’s still a world in time. There may be happily ever afters on Earth 2, but happily ever after doesn’t last forever.

And I’ll be the first to say that as a reader, the Worlds’ Finest/Earth 2 take on superheroes is totally refreshing. It’s a reminder that grittiness has as much to do with resolve, determination, and hand-to-hand heroism as it does with living in a world of corruption and compromise.