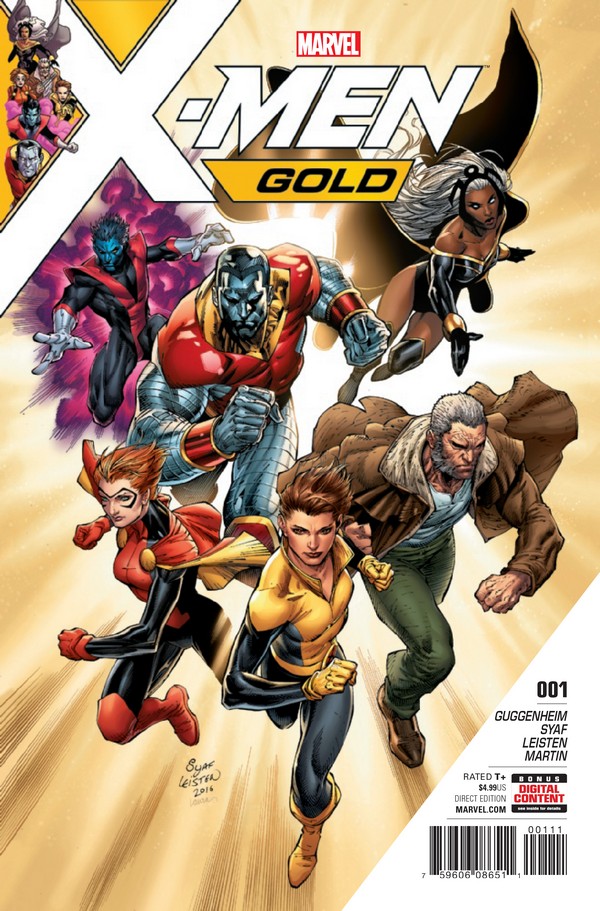 X-Men Gold #1 presents readers with a return to form, as writer Marc Guggenheim calls upon tried and true X-Men devices: a softball game, a battle cry, battlefield orders barked out, fearful public, the Blackbird, and a threat that only the X-Men respond to. Some of Column A, some of Column B.

This isn’t the greatest X-Men comic ever written, but it’s solid enough to get my attention. Well, honestly, the roster of Kitty Pryde, Rachel Grey, Colossus, Nightcrawler, Old Man Logan, and Storm got my attention. Guggenheim did his job nicely and secured my attention to the pages of this issue from start to finish.

Yes, I’ve got some questions: why does Rachel have a new codename, but Kitty doesn’t? What’s up with Rachel’s cape (and why does she “need” to fly into battle)? Does Logan have to be so contradictory? Am I offbase putting the over/under at Kitty and Colossus getting back together at five issues?

Some of those questions might be answered sooner rather than later. Some may never be addressed, but the very fact that Guggenheim has me thinking about the X-Men AFTER I’ve finished reading an X-Men comic instills great hope for this series. True, it is the first issue, and that hope could wither, but for now, I see enough of the X-Men I remember and enjoy to make a point to check back for X-Men: Gold #2.

Some of the goodness is in the writing, some is in the art. Both have their strengths and their flaws. Both have room for improvement, but both give me plenty of optimism that improvement is certainly possible. Syaf could improve his storytelling, perspective and framing, but he’s got a fine handle on casting each character’s physical individuality.

That includes details on their uniforms, textures in the backgrounds, and a solid range of expressions and postures. If he tightens up the perspective (the quieter moment Nightcrawler and Storm share, where it appears as though they are on two different planes), his storytelling (Logan leaping at you is dynamic, but it looks a bit too much like flying) and his shot choices (any of the baseball scene), then he’ll be irreplaceable.

Syaf does a nice job of describing the settings within the Xavier Institute for Mutant Education and Outreach facility, and paces the story nicely. I do hope we see a bit more of “everyday life” in each issue, as it grounds the X-Men, making them believable and empathetic. His line quality has a nice mix of Barry Windsor-Smith and John Romita, Jr., with some solid shadow-blocking that makes for a unique, almost uncommon appearance in a modern-day X-Men comic. Inker Jay Leisten has his work cut out for him, with no shortage of blacks spotted and shading cast in the twenty-five pages of new story.

Frank Martin’s earthtone-rich palette grounds the X-Men nicely, occasionally drifting into cooler choices, telegraphing the somber notes of the story, as the X-Men try to settle into their new surroundings, once more entrenched trying to help people who seemingly would prefer to have nothing to do with the mutants. There aren’t a whole lot of opportunities for Martin to get loud or bold with his color choices.

Set to try their hands at being heroes, the X-Men take on Terrax and have a visit from the New York City mayor’s office. There are personal discussions that establish the tone of the series and the voices of the characters Guggenheim has cast into X-Men: Gold #1. There are not-so-underlying metaphors about acceptance and prejudice, and, most importantly, there’s hope. X-Men: Gold #1 is a nice start in the right direction.

Guggenheim and Syaf give readers a solid entryway to the X-Men brand, including a breezy pass on the campus grounds, emphasizing the importance of the X-Men as a self-sufficient community that hovers between family and organization. The X-Men are back, and they’re returning to their roots of wanting to better humanity.

This is a solid debut, and one worth checking out. I cannot wait to see how it continues to blossom.