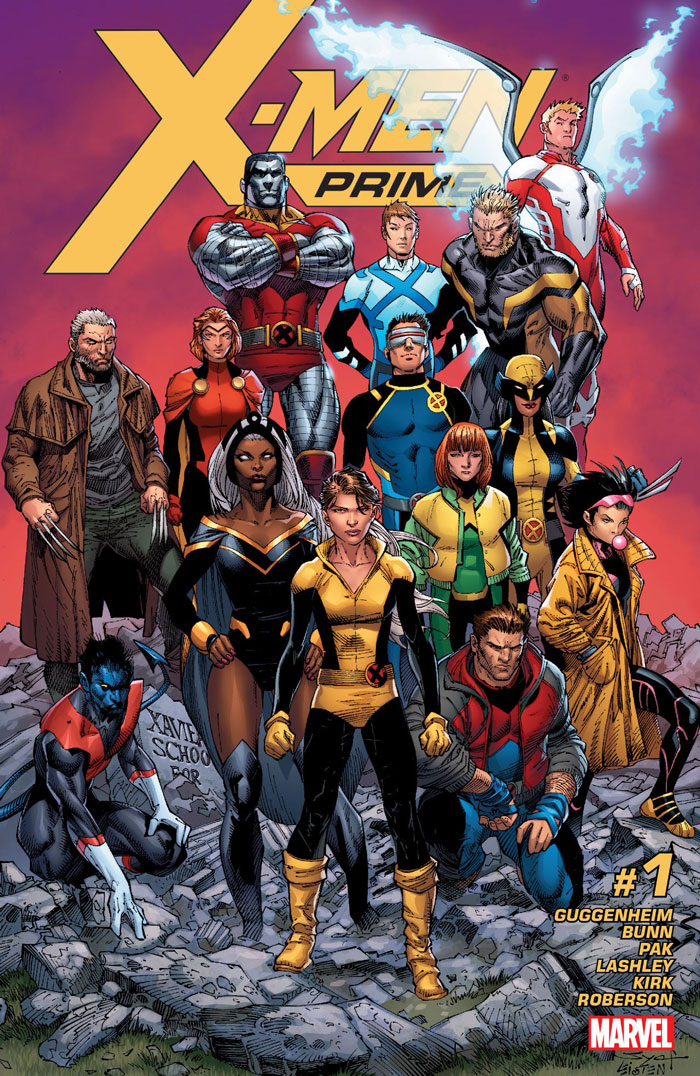 X-Men Prime #1 brings Kitty Pryde out of the bullpen to lead the ResurreXion for the X-Men. From the start, it just seems right to have the third (well, second-and-a-half) generation X-Man as our gateway character in what is, essentially a tourist’s guide to the X-Men Universe.

Marc Guggenheim presumably leads the way in this comic, which includes interludes that check in on Lady Deathstrike (of the upcoming X-Force title), Jubilee and a handful of students (from the upcoming Generation X book), and Jean Grey and the time-displaced original X-Men (X-Men Blue). Greg Pak and Cullen Bunn contribute to the writing, presumably according to their new X-Assignments (Pak X-Force, Bunn, X-Men Blue). The end result is parallel to the ResurreXion Spotlight that Marvel distributed to comic shops this week and is offering as a free download on their app.

Guggenheim uses Pryde as our tour guide, but it’s an insider’s tour. Kitty is one of the most beloved X-Men, by fans and teammates alike, so who better to sell the dream?

The art is serviceable, with moments of greatness. Ken Lashley draws Kitty’s moments, while the other scenes presumably fall to Ibraim Roberson and Leonard Kirk. More on those in a bit.

Lashley’s take on Kitty Pryde is reminiscent of Natalie Portman, which works to convey a weary, yet still young character. Kitty knows what’s best, what needs to be done, but she’s also hopeful that maybe she doesn’t need to assume the full burden. Lashley fills the background with detail, but fades the sets out at the edges, relying on his colorist to pick up on the vignettes and finish them off. Unfortunately, that sets in a coloring choice in motion that results in too much airbrush, not enough gradients, natural shadows, or transitional tones, and gives the artwork an unnecessarily saturated, almost wet finish. It works for the backgrounds and some of the outfits – like Magik’s outfit, which now appears to be a hybrid of leather and armor. Debut panels are the strongest pieces in Lashley’s part of X-Men Prime #1, but that’s not to say there aren’t other nice pieces in the middle.

Switching over to the non-Kitty-centric bits of X-Men Prime #1, Lady Deathstrike’s scene is more shadowy and very light on background, scenery or detail. It definitely could have used a bit more visual flourish to help the story, but it works to introduce Deathstrike. The “original” X-Men segment trends towards a more traditional appearance, with bolder colors, rectangular panels, and deliberate storytelling.

X-Men Prime is a fine set up for a recap/expository issue, but it falls short of being entertaining or evocative. It’s not quite an anthology, and not quite a standalone epic. It’s a commercial for what’s to come from the X-Men, but it offers hope, variety, and a quick update. It’s not a necessity, but it is a nicety.