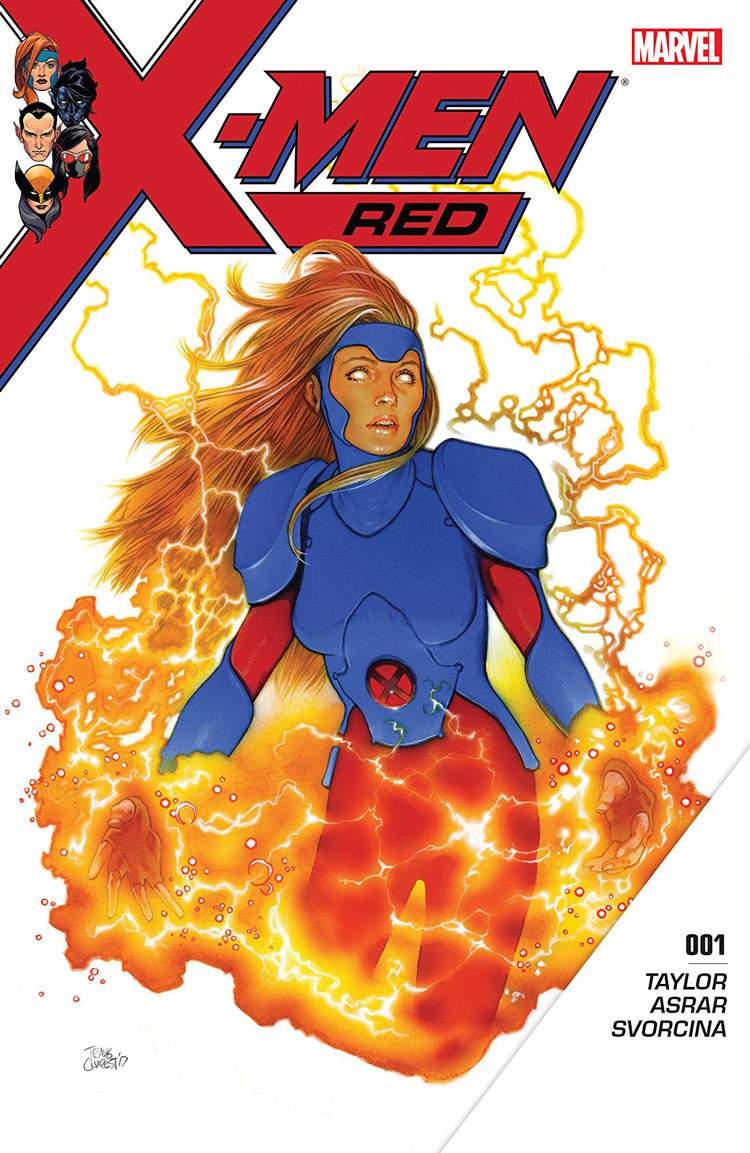 I’m waiting for Marvel to do up an X-Men coloring book that comes with a box of crayons for us readers to color along X-Men: Gold, X-Men: Blue, and now, X-Men: Red. Written by Tom Taylor and drawn by Mahumd Asrar, X-Men: Red #1 also features the talents of Ive Svorcina on colors and Cory Petit on letters.

A snappy, quick-moving, suspense-filled, seven-page opening pre-credits scene brings readers into the world of X-Men: Red. A new menace named “The Hate” has bloodthirsty crowds chasing down mutants. The mutant in question is a young girl named Heather, and her flight leads right to the X-Men.

It’s a scene reminiscent of Nightcrawler’s introduction to the X-Men way back in Giant-Size X-Men #1. In the heart of X-Men: Red #1, we learn that there’s a little more to this threat than just xenophobia and mutant hysteria, via flashback. That flashback occurs directly following the credits, and takes readers back in time two months.

Before we get any deeper into the issue itself, the credits page identifies Jean Grey, Nightcrawler, Namor, Wolverine, and Honey Badger as X-Men. The other characters (Gentle and Trinary) we’ve seen in ads and articles about X-Men: Red #1 aren’t identified as X-Men, but in the “origin” tale, the five listed above are present.

Jean Grey is clearly the leader, bringing a vision — her vision, not simply a filtered or homogenized vision of Charles Xavier’s vision — to the title and, in this story, to the United Nations. That appearance is where Namor comes in, and, as Tom Taylor does so brilliantly in All-New Wolverine, the rest of the Marvel Universe becomes visible as well.

Jean refers to Nightcrawler as the “soul of the X-Men” and shares her vision with him first, inspiring him to join her cause immediately. I’ve never really thought of those two as being especially close, but Taylor sells the shared vision, and readers are set to infer all sorts of shared bonds between the duo, including, but not limited to their return from their respective graves.

Taylor masterfully avoids exposition explosion in X-Men: Red #1, giving readers just enough to hit the ground running alongside Heather (the newly discovered mutant) and the X-Men. In the origin tale filling the latter portion of this issue, he begins to build out how the team came together, and who they are, providing the five leads with opportunities to showcase their personalities and (some more than others) powers.

X-Men: Red #1 gives readers thirty pages of wonderful Mahmud Asrar art with everything from exploding noggins to great white sharks to Namor addressing the United Nations. You know, everything that you had on your checklist for things you wanted to see in an issue of X-Men in 2018.

Seriously, though, Asrar handles everything that Taylor puts into the story and so much more. Tasked with drawing an angry mob and the delegates of the U.N., Asrar is given a wide range of people to draw, and he injects each and every one of them with individuality. Furthermore, Asrar puts his own spin on established characters, but not so much as to overpower anything that existed prior. Nightcrawler is recognizably Kurt Wagner, likewise Jean Grey is identifiable without dialog or identifier.

Asrar takes Laura and Gabby (Wolverine and Honey Badger) and elevates their presence, showcasing their personalities through their body language and giving Laura a chance to highlight her healing powers.

Asrar does a great job with storytelling, pouring reaction and personality into every character’s gestures. The one wobbly exception is when Heather meets Harold, but the camera point of view shifts in quick response to the story, giving readers a dramatic team reveal instead of a technical facilities overview, which is, undoubtedly, preferred.

Svorcina peppers X-Men: Red #1 with red, as the title would suggest, but not unnecessarily. Like Taylor’s treatment of the exposition, there’s just enough red as a through-line without wallowing in it at any point. When the red really comes into play – when it becomes the raison d’être for this title – Svorcina has dialed it back and popped everything else forward that red becomes as much a plot point as it does a hue.

Petit’s craft is also pushed in X-Men: Red #1. Five pages of a screaming baby provides a lot of challenges – balance, movement, storytelling, and more – and Petit masterfully demonstrates how it should be done. Additionally, the letterer displays how to use telepathy, both sender and recipient, and a wide array of sound effects, from telekinetically halted bullets to Nightcrawler’s trademark BAMFing. Not to mention, you know, dialog and caption boxes. Taylor takes it easy on both, choosing to collaborate with his visual co-creators, letting them tell the story rather than interpret dictation and Petit makes it look spectacular.

X-Men: Red #1 does everything an X-Men comic should do: it presents the team and the struggle, provides a purpose and an identifiable foe. Most importantly, Taylor, Asrar, Svorcina, and Petit give readers a reason to believe this team’s compatability through their own demonstration of teamwork. I was hooked with Taylor and Asrar on the book and Nightcrawler on the roster. Then they added Wolverine and Honey Badger. And Namor. I’m ready to declare this my favorite X-Men comic of recent years. And I’m definitely looking forward to more X-Men: Red.