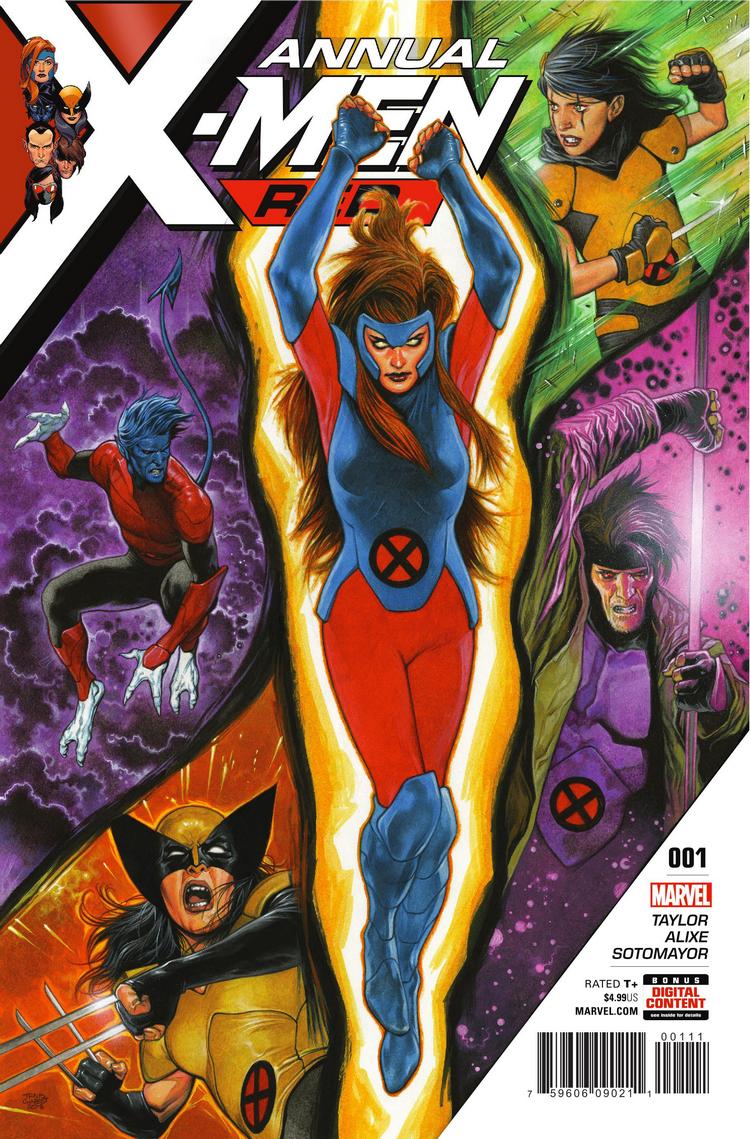 Jean Grey is back, and she’s missed a lot since the last time she was alive. After Jean’s latest resurrection story in the limited series Phoenix Resurrection: The Return of Jean Grey, she proceeded to form the Red X-Men team to create a better future. After four issues of the main series, this annual seeks to fill in the time between the last issue of Phoenix Resurrection and the first issue of X-Men Red by showing the readers Jean’s interactions with other characters as they filled her in on the many events had occurred in X-Men since she last died. Jean sees the new world into which she’s reborn (with many of its prejudices intact), and seeks to move forward via settling some business and making a plan going forward.

This issue is comprised of four different sections, which were different in their effectiveness. The conversations between Jean and the X-Men regarding what has happened are clearly meant to be emotional, but that didn’t always come across. Perhaps the most effective parts were the emotion Jean showed at seeing the Xavier Institute again and her observation that, although things have moved forward for mutants, there is still prejudice; the more things change, the more they stay the same is likely an accurate summation of prejudice and of the status quo in X-Men comics. There are some personal story threads tied up related to Scott Summers death and Jean’s response to the person whose actions killed him. This part came across decently, though resolved very quickly.

I’m mostly familiar with Tom Taylor’s writing from the All-New Wolverine series (starring Laura Kinney) and the earlier issues of X-Men Red. Based on that work, I’ve been a fan, though I think he doesn’t get to show his impressive character dialogue as much in this issue. So much time has elapsed since Jean died that the conversations between her and the other X-Men have to gloss over a lot, with little opportunity for close moments or specific interactions. While there are some memorable moments, including a truly heartwarming appearance by a fan-favorite character and interaction between Jean and Kurt, there is also much that seeks to sum up a lot of story in too few words.

The artwork by Pascal Alixe and Chris Sotomayor in this issue is is better in passages that are meant to be epic and surprise reveals than in the passages that are meant to be quiet and personally moving. The panels in which Jean is finding out about what has happened to the X-Men over the past few years don’t convey what I think they intend to, because the facial expressions that need to do the work of conveying emotion aren’t always effective in doing so. I was also surprised that there were so few moments of flashback images in the whole issue, given that the focus of almost the entire issue is on the past. By comparison, I thought that panels with backgrounds and other details were more effective at conveying aspects of the setting than the artwork of the characters was at conveying emotions.

In preparation for this review, I read the preceding Jean Grey series (starring time-displaced teen Jean, with adult Jean as a secondary character) and the aforementioned limited series Phoenix Resurrection: The Return of Jean Grey. Though generally relevant to the story of the X-Men, they’re not essential to understanding the premise of this annual. Phoenix Resurrection is valuable reading to give context for how Jean came back in the first place, and I’d suggest it for readers who plan to read the rest of X-Men Red.

What ultimately struck me about this issue while thinking about its place in the X-Men canon and its place in this series is that I’m not sure who it’s for; though there’s an ending that very much ties in to the main series and sets up some foreshadowing for fans who are reading X-Men Red, the bulk of the issue doesn’t seem to have an intended audience. The events discussed between Jean and her friends as they fill her in on what she has missed are not explained in enough detail to provide background information to new readers; meanwhile, the other content of the conversations are not enough to show readers who are already familiar with the backstory some new scenes between their favorite characters.

The X-Men Red storyline has been compelling thus far, and I thought this annual chapter didn’t live up to the high standards of the series’ introduction. I’m still looking forward to the rest of this series, but I hope that the themes introduced here are further explored in the main story. For readers who are trying to decide whether this book is worth following, I’d say that this issue a non-representative chapter of what the story has been like so far in terms of themes, tone, and artwork; I suggest reading the first four issues for those looking to determine if this book is a good fit for them.