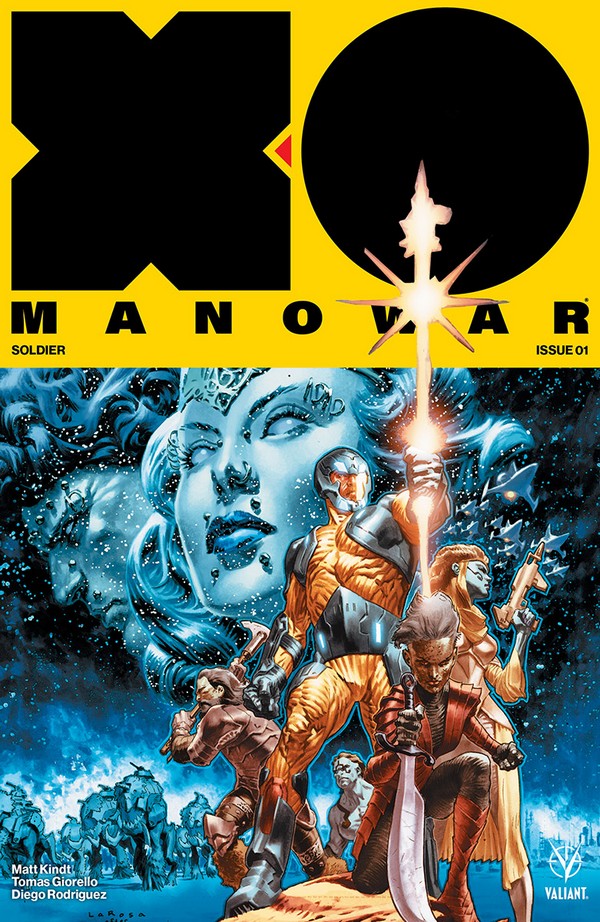 It’s a whole new ballgame for Aric of Urth. X-O Manowar #1 opens on the Planet Gorin, as noted by the caption from letterer Dave Sharpe. Aric is a farmer, living a brutal, but simple life, with the affections of a local lass to keep him company.

Writer Matt Kindt teases events from Aric’s past, but readers new to the X-O Manowar experience need nothing more than this single issue to immerse themselves in the adventure.

Tomás Giorello’s art is pure pencils colored by Diego Rodriguez, and the end result is visceral and rich. The lines are clearly more pencil than ink, which adds grit to the overall appearance of the book, not unlike the effect textured paper might produce. Aric is scarred and weary, undoubtedly his hand is rough, his hair unkempt, which comes through perfectly in Giorello’s art and Rodriguez’s colors.

The world around Aric is lit by multiple suns, which adds saturation and brilliance to the page, but the story underpins the brightness of the colors with darkness and shadow, which do creep in, again, through the Giorello’s line choices. The overall appearance of X-O Manowar is quite reminiscent of Esad Ribic’s work on Thor.

That rough, yet finished appearance matches Kindt’s story. Gorin is a planet besieged by conflict. The Cadmiums and Azurians are entrenched in hatred, with the Cadmiums clearly holding the upper hand.

X-O Manowar #1 opens with all able bodies being pressed into service, even if that service is essentially as a human shield while the true Azurian soldiers wield the weapons of war and step upon the fallen comrades to advance their cause. Through this conflict, drafted by the Azurians, Aric fights, and Kindt shows readers Aric’s fighting spirit, his determination, and his ability to make war his own.

The minor nits I have to pick with X-O Manowar #1 fall on Giorello’s shoulders. There is a reference to the Azurians having tails, but, unless this is a euphemism, no tails are apparent in the art, which in its defense is considerably gritty, but maybe that’s a development for a future issue of X-O Manowar.

Furthermore, there is a scene where Aric is using a tool and making an adjustment to the X-O battle armor, but the adjustment is only clear in the dialog following that scene. It’s a minor quibble, sure, but a hiccup in a story that enjoys some solid storytelling otherwise.

The battle at the heart of X-O Manowar #1 is brutal. Giorello, Rodriguez, and Kindt don’t hold back, and by the end of the issue, readers are certain to feel embedded with the Azurians, looking to Aric for direction and defense.

Kindt and company really open X-O Manowar #1 up to readers, not so much inviting them in as dragging them in, sweeping them up into action and moving forward in a brutal, unwavering manner. Yet another strong debut from Valiant, X-O Manowar #1 offers a lot to look forward to and a firm entryway for new readers.