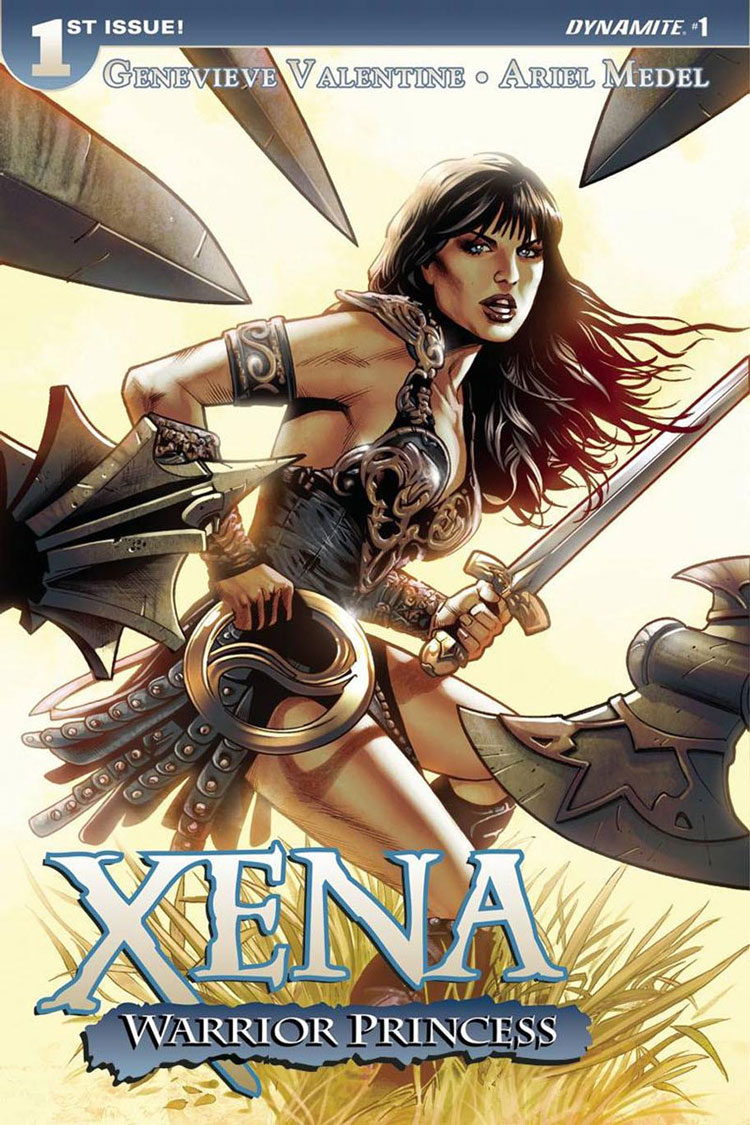 Xena and Gabrielle wake from a 25-year enchanted sleep to a much different world. Rome is seen as protectors and the Harpies — a legendary freedom-fighter tribe — are seen as the enemy. Could it be true, or is there slight of hand at work in the countryside?

There’s a whole lot of pop culture I missed by growing up in the 80s. Mighty Morphin Power Rangers. Buffy the Vampire Slayer. And Xena Warrior Princess. So, going into issue #1 of Dynamite Entertainment’s first ongoing for the classic heroine and her girlfriend, the lovely Gabrielle, was a little daunting. Overall, I think I fared OK. I get the gist of the story. I think I’m missing a little nuance, if not the distinct voice of the characters. But I’m not lost.

And that’s about where I’m at by the end of the first issue. Genevieve Valentine, who took on one of DC Comics’ most distinctive female characters, has moved on to another media superstar with a fanbase who are probably far more equipped than I to judge on accuracy and whether or not Xena Warrior Princess #1 captured the spirit of the character. And I’ll be reading those reviews upon finishing this one, because I don’t know if get what the characters are about from this one issue alone, outside of the basics.

But by the same token, I wonder how much we ever do.

As someone who is mired in comics that tell new iterations of stories about characters and places and things I’ve known since eight years old, jumping into anything new is a challenge. But in looking at other breakpoints in narratives for classic characters over the past few years — from Red Sonja to Valentine’s own Catwoman series — the essence of the character seemed to resonate better than it does here.

I understand Xena has a nobility of honor about her that leads her to protect the innocent. She’s not particularly brash, and in fact, we don’t see much but posturing in this first issue. Her legend is as a great warrior, but her actions don’t betray it.

There is, however, a joy Xena has among the children she rescues and alongside Gabrielle that’s unmistakable. While the linework by Ariel Medel feels a little underwhelming, with backgrounds hatched in and diminishing returns on figures as they get smaller and smaller in panels. The still shots of Xena, particularly those in pose with her sword, are inspired, but they don’t ever feel like they could be more than statuesque. The dynamism of the issue is a little lost.

It appears that the next issue leads with action, so all of this could turn on its head in an instant, and I think there’s little doubt Valentine and Medel are up to the challenge. I may not have been hooked by the first issue of Xena Warrior Princess, but neither was I turned away. 30 days more, and I’ll be back for sure. It would be hard to pass up a book with this creative team, or with queer leads — both all but guarantee my attention and determination to settle in and get to know Rome just a little bit better.