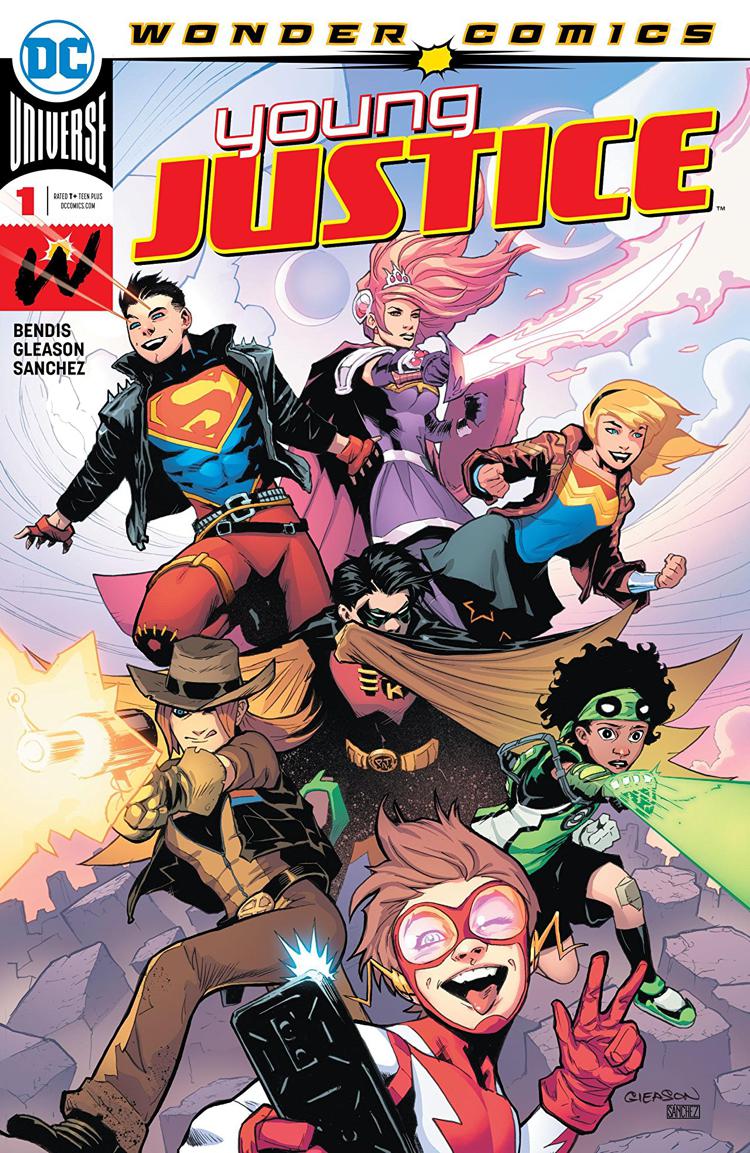 So shouts Impulse on one of the most joyfully fun two-page spreads of a DC Comic book in quite some time.

Written by Brian Michael Bendis, drawn by Patrick Gleason, colored by Alejandro Sanchez, and lettered by DC Lettering, Young Justice #1 is a strong, bright debut for this title as well as Bendis’ Wonder Comics imprint from DC Comics.

I took the brand “Wonder Comics” to heart when this series was announced, choosing to let go and let Bendis and crew show me how the concept of Young Justice works in the current post-Rebirth DC Universe. Boy, am I glad I did.

Contrary to some reports of his “trademark” style, Bendis doesn’t set this up for an overly long, drawn-out team formation. All of the Young Justice cast that we’ve seen in ads, press releases, and solicitations are right here between the two covers of Young Justice #1. The story is obviously set up to be continued, but Bendis gets right into it, giving us a majority of the main players – and then some, thanks to the Gemworld invaders.

And he gives us a little more. Titled “Seven Crises”, this issue brings an invading battalion representing the Twelve Kingdoms of Gemworld to Earth – Metropolis, specifically. In a not-so-rare comic book coincidence, Superman’s not home, but Jinny Hex (who debuted in the Walmart exclusive 100-page Batman #4, co-created by Bendis and Nick Derington) is moving into town and we eventually see Tim Drake Robin, Cassie Sandsmark Wonder Girl, Bart Allen Impulse, and an all-new Teen Lantern jump in to help vanquish the invaders.

It’s a fun, loud, bright chaotic fight, featuring boldly colored heroes battling majestically colored opponents in the sunny streets of Metropolis. Kudos to Sanchez and Gleason for punching up the color so much that this would almost certainly make a box of Crayolas blush. If you’ve read any of my reviews before, you know I prefer traditional ink lines to color-close outlines, particularly for hair. Sanchez does employ the color-close lines, around some of the characters’ hair in some spots, but he also uses it for the energy blasts and Speed Force effect trailing Impulse. Again, context adds to enjoyment. It’s not just one character randomly having a dark yellow halo around blond hair, it’s an effect used for depth and quality throughout Young Justice #1.

The art in this comic is, as expected from Gleason, stunning.

Gleason has a couple murky spots where the quest for cool shots, neat layouts, and fast-paced storytelling don’t quite come together, such as when the invaders from Gemworld face off with Jinny Hex or the twelve-panel Robin punch-up. In the context of the story flow, however, those moments smooth out. The Jinny spot leads to Robin’s debut and the punch-up begins and ends with a larger visual presentation of Robin’s opponent, assuring the reader that it was the same character through all twelve boxes, but, unfortunately, if you’re not Gemworld-literate, you might not know exactly who that character is.

Those spots are, like I said, couched in context, so clarity is delivered through reading, as it should be. Thankfully, Gleason’s art is so clean and energetic throughout the story that those two bits are easily absorbed into the grandiose visuals throughout and may, ultimately, be nowhere near as distracting to a majority of other readers.

Gleason’s range is showcased in this comic, from the vehicles in traffic to the explosion of Gemworld invaders to the dramatic splash-page debut of Tim Drake and the quiet conversation on the bustling streets of Metropolis between Tim and Cassie. Gleason adds texture to the rusting exterior of Jinny Hex’s pickup truck, folds to the tablecloths in the nearby restaurant, and magnificent page layouts to Impulse’s dynamic rescue of a kid, a baby, cats, and a girl. The last scene is a brilliant example of how to set motion through static images with one of the most energetic characters in comic book history. And, if you study that one spread, you’ll see a city turned upside-down in battle, and nine other combatants bursting forth, equally in motion, but nowhere near as zippy as Bart Allen.

I could go on and on about Gleason’s work in this comic, from his ability to deliver different, unique characters completely immune to the dreaded comic book sameface disease to his intricate designs for everything from the Gemworlders to Tim Drake’s motorcycle jacket. Gleason is a modern master, who is clearly having fun with this issue, so much so, that I like to thin he’s smiling as widely as Impulse on the spread I mentioned at the start of this review.

Speaking of that spread, Impulse’s declaration is the only dialog on that page, and it sets the pace for the issue, as Bendis makes everything nice and natural. There’s no forced dialog here, but there is plenty of conversation to give readers a definite sense of each and every character as they join the action. Like Gleason and Sanchez, Bendis appears to be having fun here and is definitely trying to encourage readers to have some fun too. Choosing Gemworld as the opener for the series adds a sense of DC history, a tinge of mystery, and a sense that this is a grand adventure into new concepts that have become new through the combination of familiar and fan favorites assembled like a Lego set without directions.

This is the first I’ve noticed “DC Lettering”, which seems spot-on, considering all of the logos shouted in word balloons. The “Young Justice is back!!!” scene pulls the logo in from the cover. Superman’s logo is dropped in, as is every single character that comes along into the Metropolis melee. Whoever DC Lettering is, this is a nice example of corporately aware lettering that manages to have its own fun, play into the range of characters and dialects, and add to the story without distracting too much. You know, except for the logos.

My biggest ding on this debut issue is the language. Not the dialog, but the amount of times “ass” comes up in this issue and the occasional “damn”. I was hopeful Wonder Comics would be an all-ages-friendly brand, but I’m 90% certain my sister-in-law wouldn’t be too keen on me handing this to my nine-year-old godson, despite the fact that he has, undoubtedly, encountered those words in his life already. There’s something different in hearing it as opposed to reading it. Hearing it comes with the context of use, but reading it in a comic book in your hands seems like it might be a license to use those words in daily life.

For seasoned comic book fans, new to Young Justice or experienced with the concept, Young Justice #1 is electric, exciting, and entertaining as all get-out. It’s been too long since I’ve read the Peter David-Todd Nauck run, but this is definitely trying to tap into the energy of its predecessor. It also generates a sense of comfort and potential promise, like some of us found in the Rebirth special that brought Wally West back into the DC Universe.

Bendis, Gleason, Sanchez, and the DC Lettering crew have crafted a fun adventure here that is nearly fit for all ages, but totally entertaining for anyone who picks it up. And I strongly recommend you give this book a read, especially if you’re looking to reawaken your own sense of wonder or just find a comic you can have fun reading again.