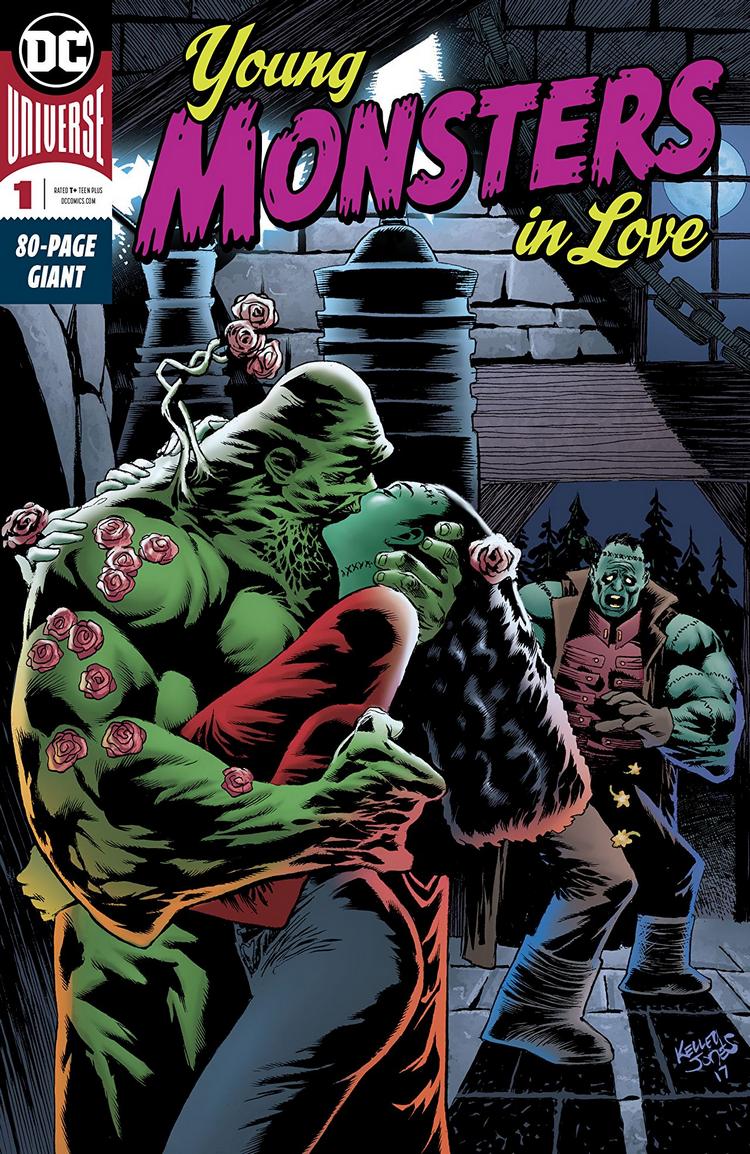 When DC Comics advertised Young Monsters in Love as “The Valentine’s Day Special that no one saw coming!” They were not kidding around. This was one of the most surprising, touching, and intriguing comics of the year. As a lifelong Valentines-hater, I am amazed at how much these love stories appealed to me. Likely, that’s because some of these are not love  stories at all— not quite. At least, not in the traditional sense. We’ve seen Valentine’s Day Specials from DC before, usually involving long-time DC couples or Harley Quinn’s wild adventures in love an misery. Young Monsters in Love is something completely different and totally unexpected, which makes this a Valentine’s Day Special you don’t want to miss, no matter what your stance is on this pink-washed holiday.

DC has pulled my heartstrings for monsters before, most recently in the first arc of the new Detective Comics, when Clayface became a likable, relatable character. Monsters are monsters, monsters are villains. We are supposed to love the heroes, and the heroes are supposed to find love. Breaking that mold is what makes these stories so compelling and innovative. Each vignette is breaking the norm somehow (to varying degrees of success) and exploring the l,ove of DC monsters.

This compilation is appealing for longtime fans who know the ins and outs of DC monsters, but also to readers who may not know who some of these monsters are. Each comic is finished and complete, with some packing in enough to easily uphold their own mini-series. This special is so much more than I expected, and it easily outweighs the value of it’s $9.99 price tag. With 80 pages of solid story, emotion,  and brand new ideas, this DC Special is the perfect celebration of love in all its shapes and forms, even the monstrous type,

Every comic, and every monster, in this over sized Young Monsters in Love Special is completely different . It all comes together in a lovely package, but every piece truly does deserve a spotlight.

That said, here are some rapid-fire mini reviews of every single comic in the 80-Page behemoth. Whew!

Man-Bat becomes a metaphor for control when Kirk’s relationship is affected by his reliance on the Bat serum. The art creates a stunning view of what it feels like to be haunted by your past and shadowed by the darkest recesses of your own mind, but transitions seamlessly to lighter notes of hope and change. Sometimes, love is about taking time to love yourself, your true self, before loving someone else. This take on addiction, control, and personal strength is a strong and emotional opening act for this book.

Frankenstein, Agent of SHADE in “Pieces of Me”

First of all, the title of this piece is amazing. Tim Seeley writes some perfect, flowery Franken-poetry that reads in stark contrast to the futuristic setting of the comic. Like lost loves and his archaic speech, Frank himself is an anachronism in this new world. The art perfectly captures the dichotomy between a romantic, predictable past and an ever-changing future. With gorgeous lettering from Clayton Cowles, the perspectives are balanced and the different voices are easy to follow. I am a particular fan of the twist at the end, and i think you will be, too.

Solomon Grundy in “Buried on Sunday”

A Superman story might seem out of place in this Monsters collection. Lois and Clark are romantic, sure, but what’s the twist? Red Kryptonite? Nope— in this glimpse into the heart of one of the most underappreciated DC villains, Mairghread Scott defies all expectations. Solomon Grundy is the unexpected catalyst for teaching us the themes of familial and tonic love, as well as empathy and compassion. Monsters in love were not always monsters, but time can change everything. Love and friendship, though, can break through even the hardest walls.

Raven in “The Dead Can Dance”

While the “Girl who hates Valentine’s Day is won over by romance” story line is not new and certainly not my favorite, this version is a little creepy and almost cute. Not quite. I have a hard time believing this is Raven. It reads like a bland teen romance trope with only vague adaptations to fit the DC Universe. This comic did win me over visually, though, because it is absolutely beautiful. The colors truly elevate and embody the magic and darkness that the plot leaves out, Raven’s hair is ethereal and flame-like, and the supernatural elements and dark backgrounds re relayed expertly by the artistic choices.

Deadman in “Be My Valentine”

Paul Dini is a masterful storyteller, and Deadman, in his hands, is a mix of poignant, touching heroism and well-executed moments of humor. My favorite Deadman story to date is Deadman: Dark Mansions of Forbidden Love, a mini-series from Sarah Vaughn and Lan Medina. That series introduced a modern version of Deadman who is caring, humanized, and has a touch of romance. He wants to use his ghostly powers to help people. This short comis utilizes some familiar themes regarding bullying and compassion, but still delivers an important message about the intrinsic value of every person. The art and colors are perfect, and capture the divide between Deadman’s supernatural experience and the human world.

Another winning title from the world of romantic DC monsters! This is my favorite comic in Young Monsters in Love, though my undying love for Swamp Thing and my recent obsession with The Shape of Water might leave be a little biased. This story is intriguing because it begins at the “happy ending”, when the monster is already a man. As always, Swamp Thing provides a mesmerizing view into what truly defines out humanity. The art is beautiful, innovative and striking. The soft textures and bright colors enhance the message of the story. I’m off to rally at DC for this to be the team for the next Swamp Thing ongoing.

Monsieur Mallah & The Brain in “Visibility”

I almost stopped at this one, because it seemed to be headed in a weird direction and I had no in trest in seeing a giant gorilla insult a woman for trying to do her job. I though that the Mallah and Brain from Doom Patrol had been abandoned in some strange attempt at inter-species hetero-romance. I’m glad I stuck around, because this story is surprisingly wonderful. I won’t spoil it for you, but I did read it twice and I may have cried. The last panel is going to stick with me for a long time. Even if you have never heard of these characters, this short comic is going to make you want to learn more. Pay close attention to the fantasytis interlayed heart-shaped panels, I’ve never seen anything like it.

I, Vampire in “The Turning of Deborah Dancer”

This comic gave me serious Buffy vibes, including the hot vampire babe, pushy attractive vampire dude, and the forced feeling of ‘female empowerment’ that leads nowhere. The plot seemed to jump around without much direction, which is attributed to the “I Can’t You’re Human” nonsense, even though it’s pretty obvious from the beginning that he’s going to do it anyway….While this was certainly not my favorite story of the bunch, the art was gorgeous. I would read this again just to see the detailed winter backgrounds and layered, glowing colors. I wish the story had a little more room to develop, because it was a bit of a lackluster addition to the rest of the monstrous love stories.

The Demon in “To Hell and Gone”

This one is a really cool story and concept, but the love story aspect felt like a forced afterthought. I enjoyed this interpretation of the Demon, but this plot truly was all about him. His love interest had very little character besides loving him enough to drive her insane, which makes him feel guilty. Overall, this is a well-made comic and it reads like an indie mini-series that would probably be pretty successful, but it was unfortunately outshined by other stories in this collection. There was a lot of really good fire, though, and some awesome battle panels. It just wasn’t a love story that spoke to the same deep feelings of the other comics.

The Creature Commandos in “Dear Velcoro”

Now, before you go thinking this is just a shallow twist on a “Dear John” story…well, it totally is. This is another comic that was just OK, but did not completely feel like it belonged in this collection. I’m all for vampires and werewolves fighting nazi robots, but a lot of this story, especially the aspects of love (both romantic and platonic), felt forced and shallow. The conversations about the creatures’ girls back home is objectification at best, and didn’t touch on charming or romantic at all. The Vampire one-liners land solidly, but everything else feels unnecessary and out of place. Overall, this was a disappointing close to an overall stellar collection of stories.

WHOAH! What a wild ride through the world of romance and monsters. It was refreshing to see these villains and lesser-known DC characters in starring roles, especially because they are usually the last contenders for romantic roles. Some components were, of course, better than others. However, for an 80-page book, there is a lot of great content and a story to appeal to everyone.

I rarely recommend single issues wholeheartedly at this price point, but Young Monsters in Love was a fun, action-packed and emotional read. For DC fans and new readers, this is a perfect pick up for Valentine’s Day and beyond. DC thought outside of the box this year with releasing this special, and without really prominent characters, it could have easily been a monstrous failure. They took a risk in getting these stories to us, and it was worth it. If you have a spot on your comic shopping list this week, Young Monsters in Love is a fun, versatile read that is sure to entertain.