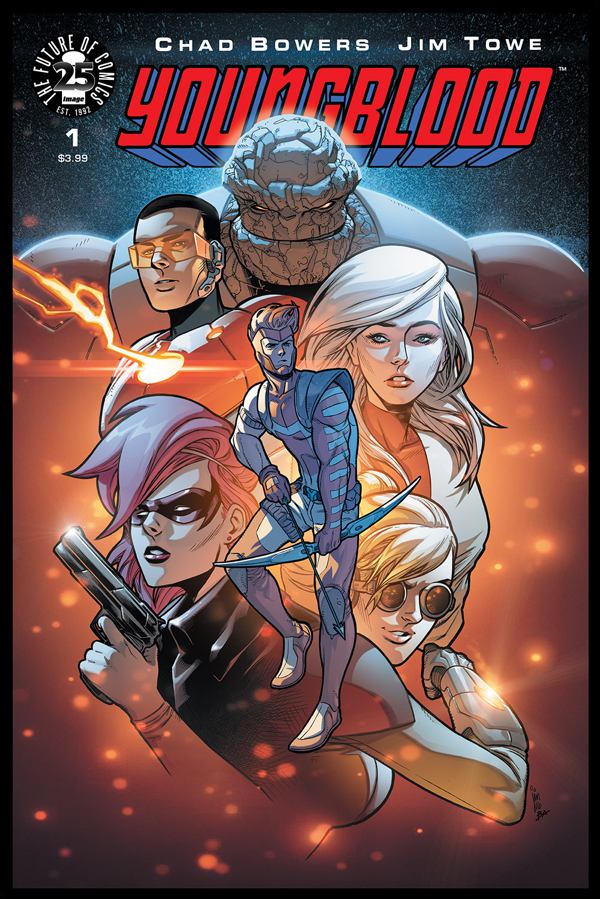 Full disclosure time: In the twenty-five years since it appeared, I’ve never read any issues of Youngblood. I did read Bloodstrike once, but that’s neither here nor there.

So let’s do this.

From page 1, Youngblood #1 had my attention. Place a comic in the D (Detroit, for you non-Michiganders), and I’ll give it a look-see. Give it some good art, a snappy paced story, and an open invite, and it stands a pretty good chance to hit my reading pile. Add all of that to the brand created by one of the comic industry’s most enthusiastic individuals (no matter what your opinion is of Rob Liefeld’s work, there is absolutely no disputing that he loves comics) and it’s review-worthy.

That’s not to say this is a perfect comic book. It’s not. Youngblood #1 is not a perfect comic. But it is a fun comic that has just enough going on for me to stay hooked from page 1 to the end of the issue.

For readers familiar with the recent Ant-Man series from Marvel that featured the Hench arc, Youngblood #1 is going to provide an echo. The story opens with a young hero (Man-Up, because he can grow gigantic) answering a call on Help! and falling into a mystery. The mystery introduces us to Petra Gomez, also known as Gunner, and Youngblood #1 uses her to introduce us to the larger, very lived-in world of super powers that have put a former hero (not sure where Diehard falls on the good-evil spectrum) in the White House.

Writer Chad Bowers’ script is sharp and fun, his characters are believable and, for the most part, likeable. I’m not saying one line of dialog is going to hook you, but Bowers gives you enough to think about liking the characters, even if the characters just start piling up without much apparent connection. By the end of the issue, however, Bowers has the story in full-on “forming” mode, with most of the pieces finding their way onto the board.

Jim Towe’s art is crisp and lively. His characters are, for the most part, consistent throughout, or at least variable enough one from the next to be distinguishable. Colorist Juan Manuel Rodriguez also does a fine job with the issue, going so far as to add some textures instead of just flat tones into the panels that Towe leaves open. The textures don’t detract from Towe’s art, and, as a matter of fact, add to the energy of Youngblood #1 quite nicely.

Towe does a good job paying homage to the extreme anatomy that is synonymous with Youngblood while maintaining his own identity throughout this issue. The artist doesn’t mire in the title’s history, but finds ways to celebrate it, incorporate it into what he’s doing, and move on. Towe activates a hypnotic suggestion through his art (triggered by the story) that is truly mesmerizing, especially as a high-water mark in the collaboration between line art and color in Youngblood #1.

Despite some some wobbly anatomy (particularly arms that bend in ways indicative of stretching powers, but nevertheless look dynamic and certainly contribute to Towe’s storytelling), a sprawling cast that nearly requires a old-school NFL Game Day program, and a backup tale from Youngblood creator Rob Liefeld that’s only long enough to make you shrug your shoulders, Youngblood #1 brings quite a bit of fun. These quibbles can be overcome, adjusted, monitored, and transformed into strengths. This is, after all, a first step. No journey ever stops with one step. I’ll certainly be checking in to see where the next step takes us.