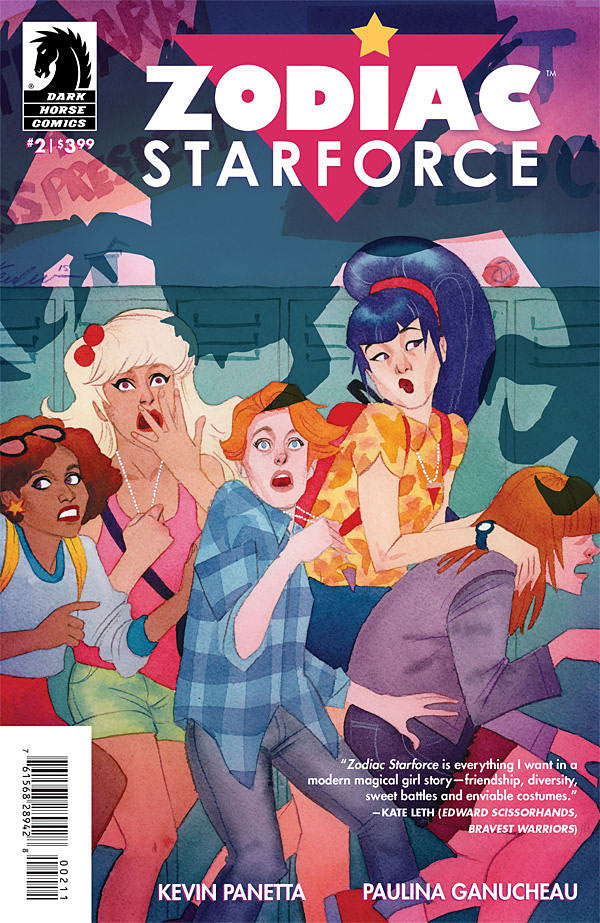 After what felt like a lifetime (I checked, it was only 5 weeks), Zodiac Starforce returns with its second issue. Having promised a much larger focus on action as well as the interpersonal relationships between the girls, Zodiac Starforce #2 does not disappoint. The change in pace is noticeable as the creative team allow more space for heroics while simultaneously continuing to develop their characters unique personalities.

Kevin Panetta’s writing is completely charming. The dialogue is witty and does not condescend or seem forced when spoken by teenage girls, something that is so frequently the case with media aimed primarily at girls and the friendships feel as authentic as the rivalries. There is a lot of extremely relatable material in this book, particularly Emma’s decision to not tell her friends how bad her current situation really is.

This is not an uncommon behavior among women who are so often taught to keep things to themselves, and not cause a fuss. Also worth mentioning is the reference to Macho Man Randy Savage that caused me to do a double take because I just wasn’t sure whether or not I had imagined it. For the record, I had not. It’s definitely there, in amongst the magical girls, where all good Randy Savage references belong.

With artwork from Paulina Ganucheau, every single page of Zodiac Starforce is completely adorable and I can’t decide whether I love the characters hair or clothes more. We also need to take a moment to fully appreciate the perfection that can be found in Molly’s eyebrows – they are truly without equals. Ganucheau has done a fantastic job of capturing each of the characters differing personalities through facial expression and body language, and the inclusion of background details such as Emma’s Sailor Moon clock go even further to flesh out each of the girls.

What is most important about Zodiac Starforce is that Panetta and Ganucheau have given readers a cast of unique and highly relatable female characters. Girls, especially teenage girls, are often portrayed as fairly one dimensional but the characters in Zodiac Starforce are so multi-faceted. We see them as being interested in fashion and sport, texting in class, and most importantly supporting each other’s pursuits even if they are not things that they themselves are particularly interested in.

Also noticeable is how few male characters are in this book, and when I say noticeable I mean great. Those that do appear have little to no dialogue and are eventually sent away to think about what they have done.

Although we are currently only 2 issues into the series I don’t think it would be unfair to say that with bffs, mean girls, crushes, monsters, portals, and pesky kids, Zodiac Starforce lights the way.