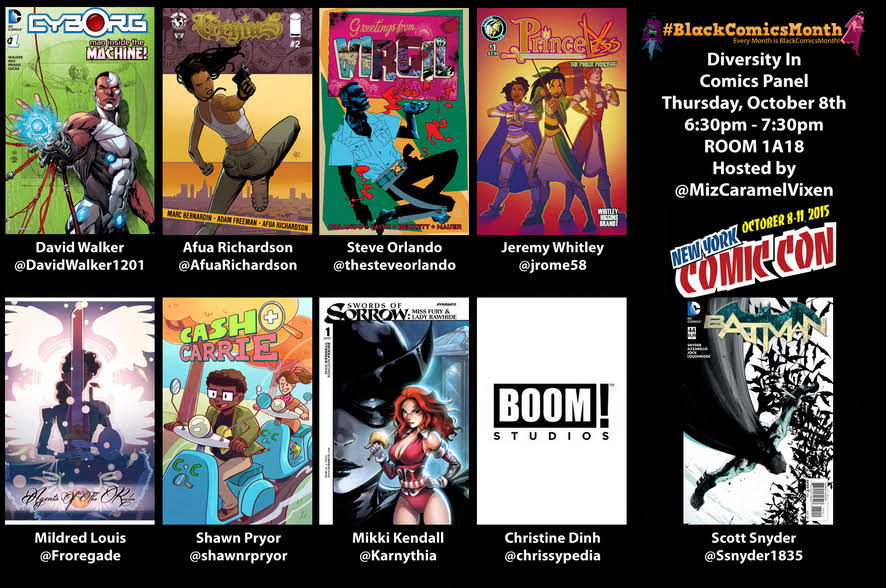 October 1, 2015, NEW YORK, NY — After its overwhelming success at NYC: Special Edition in June, #BlackComicsMonth is hitting New York Comic Con with a panel that celebrates and advocates for diverse voices in comics. On Thursday, October 8 at 6:30, rising star comic book creators like David Walker (Cyborg) and Afua Richardson (Genius) will take the stage —in room 1A18 for the Diversity in Comics panel.

The panel will be hosted once more by the incomparable Dean “Tee” Vixen of VixenVarsity.com and BlackComicsMonth.com, whose goal is to make the conversation about diversity in comics completely inclusive.

“Diversity is about race, sure, but it’s also about gender, sexual orientation, disability, mental illness and so much more,” Vixen said. “All of those voices that tend to get marginalized or silenced — we want them to be able to speak loud and clear in comics. There are stories from these voices that no one else can tell with the same insight, and people need to hear them.”

#BlackComicsMonth originated in February 2015, when Vixen created the hashtag to celebrate comics during Black History Month. After it went viral, bringing much needed attention to black comic book creators and characters, Vixen declared “Every month is Black Comics Month.” Her efforts in championing diverse voices in comics have garnered media attention from The A.V. Club, Buzzfeed, Comic Book Resources, The Mary Sue, ComicsAlliance, and many others.

A full video of the #BlackComicsMonth: Diversity in Comics panel at NYC: Special Edition is available to view on YouTube.