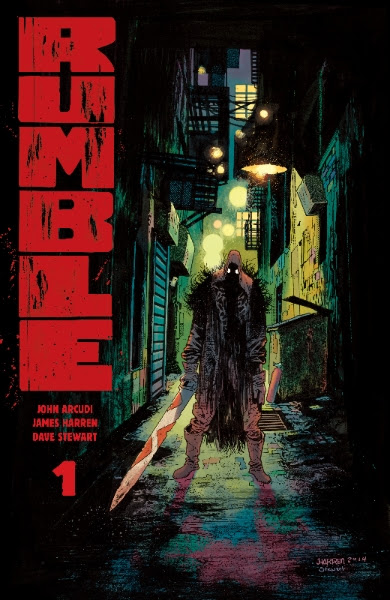 Co-creators John Arcudi (writer of BPRD, Savage Wolverine, A god Somewhere and the Eisner-nominated The Creep) and James Harren (artist on Conan, BPRD, and cover artist for the Hawkeye vs. Deadpool) team up once again for the launch of an epic and bizarre action/adventure series filled with fantasy and page-turning thrills arriving on December 17.

In RUMBLE, a scarecrow—a warrior scarecrow god called Rathraq, that is—walks into a bar…and it’s all downhill from there. After a long absence, Rathraq is back and very unhappy. This is bad news for his old enemies, yes, but even worse news for everyone else, including bartender Bobby LaRosa who finds himself caught in the chaos.

RUMBLE is an eclectic mix of tone and genre, something that Arcudi commented on as adding depth and a dose of reality to the story. “Rumble is not just fantasy, not just action, not just drama, or not just humorous, you know? That’s too limiting. That’s not how we live. You wake up happy, then something happens that messes up your whole day (of course, in the case of Rumble, that ‘something’ just so happens to be a giant sword-wielding scarecrow and some monsters), but you still manage to have a laugh that night. What I like about this book is that any character can have a day like that. Any of them, human and non-human.”

Arcudi also cited Harren’s flexibility in art styles as allowing for smooth transitions throughout RUMBLE. “James’s art allows us to go in all the directions the story needs to go. Nobody draws ferocious action the way James does. Monsters smashing each other’s heads in, that’s in the book, and James kills on it! But he also can set a spooky mood, and while his idea of what’s ‘funny’ is rather bizarre, that’s exactly what the book needs!”

The characters of RUMBLE must adapt along with the readers and will go through various transformations along the way. Arcudi added: “What I hope will be entertaining to readers is Bartender Bobby’s unique way of adapting to his new and rapidly changing world. That’s also true of Rathraq, the warrior scarecrow. He has to adapt to his new world as well, but in a very different way and for very different reasons. From those kinds of perspectives grow all kinds of interesting plot lines and stories! And they’re just two of the many characters we’ll be playing with.”

RUMBLE is a modern-day action fantasy series where rundown dive bars, undead kitty cats, psycho skinheads, and giant mummies run amok. RUMBLE #1 will be available on 12/17, and can be pre-ordered with Diamond Code OCT140580.