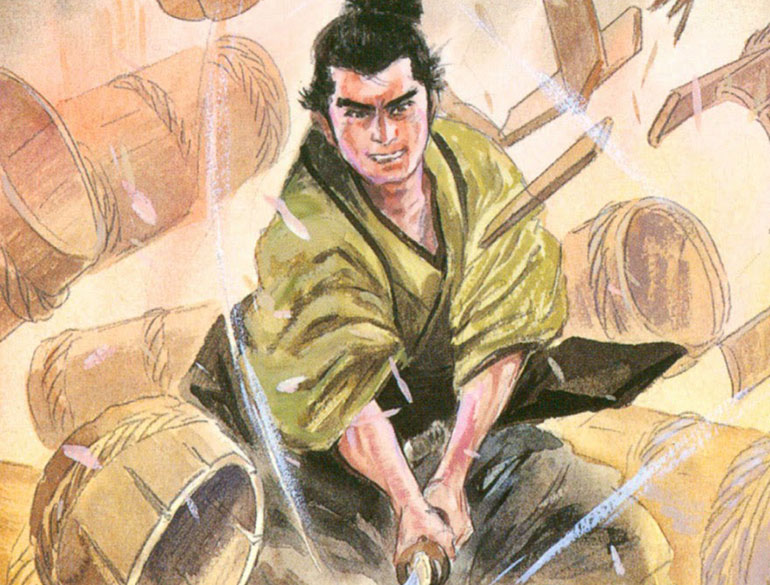 If comics can be said to be a conduit for mythological symbols, both ancient and modern, to help us solve problems, what does this look like in practice when we turn from the familiar to the unexpected?

For many American readers, there is a tendency to absorb and appropriate Japanese terms such as “samurai” and “katana.” In fact, many believe terms such as these have become suitable for both realistic and pop-culture manifestations of thought.

What I mean is, specifically, there is a deep and complex mythology of meaning behind objects such as katanas, for example. For all their historical and artistic beauty, however, they can also be objects that service a kind of ‘rule of cool,’ i.e.: want a character to seem cool? Have them use a katana! 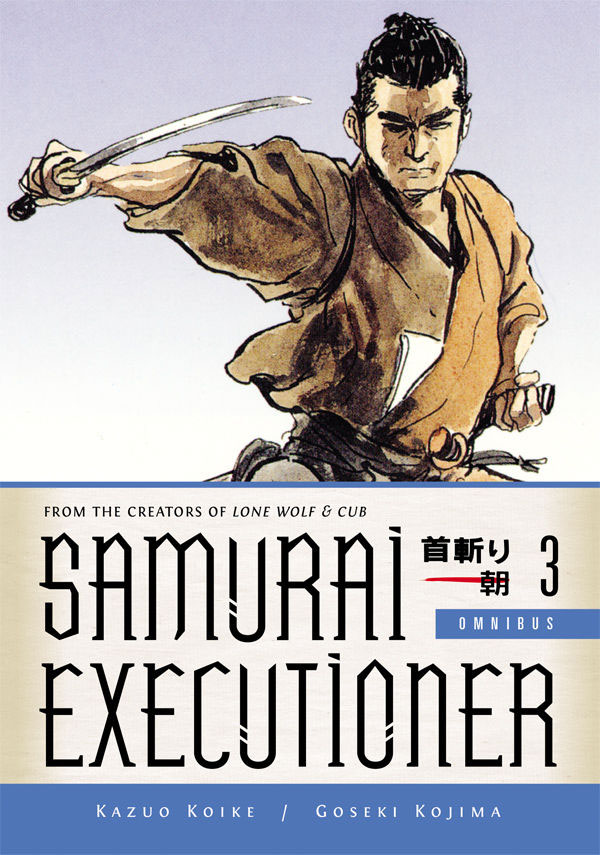 Are there comic works then which provide a complex exploration of psychological and emotional feelings concerning both a ‘mythological’ and ‘historical’ view of samurai, katanas, and honor? The manga works of Koike Kazuo (小池 一夫), Samurai Executioner in particular, provide a decent window into exploring how comics help us understand and talk about death, and all with a hybrid art/aesthetic that merges the mythological samurai with the historical one.

Koike Kazuo is famous for his role in manga stories such as Golgo 13, the amazing Lone Wolf and Cub, and Crying Freeman. Among all his works, I am most partial to Samurai Executioner, the chronicles of Asaemon of the Yamada clan. Asaemon was born a ronin (a samurai with no station or formal position) yet he manages to acquire the position of sword-tester for the Shogun, the supreme military figure in Japan during the period the manga is set in. 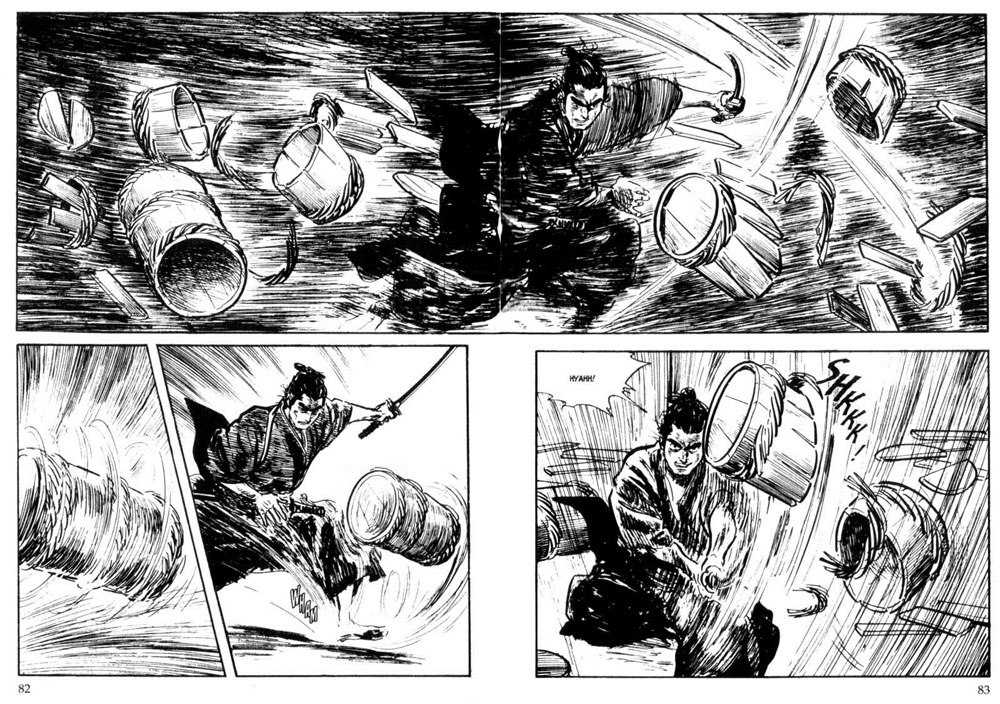 In a way, Samurai Executioner and The 47 Ronin could be read alongside one another, as they exist within the same ‘historical space,’ yet the story of the 47 and their attempt to regain their honor would seem chipper compared to the kinds of characters Asaemon encounters. Indeed, Asaemon might have been the sort of character that members of the 47 Ronin would have seen last, right before they were executed.

Asaemon, and men like him who served the Shogun, embodied duty and obedience to the rules of the day. Men of position within the Shogunate were bound by certain concepts of honor, and often lofty familial responsibilities and bonds of kinship, to perform their respective tasks. Without wars for the samurai to regularly engage in, men and metal had to be tested in different ways. Hence Asaemon’s job, testing swords on bodies of the living and the dead alike.

Samurai Executioner is not an easy comic, and I would not recommend it to just anyone. It offers an attempt to realistically render up the harsh and gruesome realities of the Shogunate. 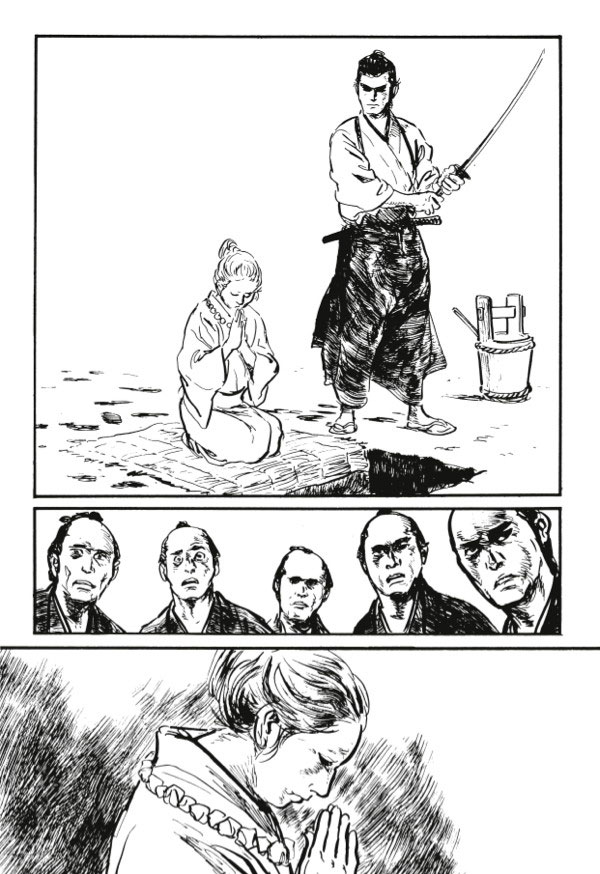 In the second chapter of the first volume, a section entitled ‘Yamada Asaemon the Third,’ Asaemon goes through a ritual trial in order to attain the position he is seeking. The task before him begins as a routine use of certain swords on cadavers of criminals, a real practice which was one of many methods for testing the quality of katana blades.

Ultimately, Asaemon’s first day results in him killing the first woman he ever really made love to and connected with physically. Indeed, Samurai Executioner is full of as much reality as can be squeezed into the panels, from maps of building locations to (per the translation into English) terms and positions of offices being laid out in stark formality. Samurai Executioner, in a certain sense, could serve as a kind of historical window into a very specific kind of life, the life of a consummate professional doing a grizzly job. 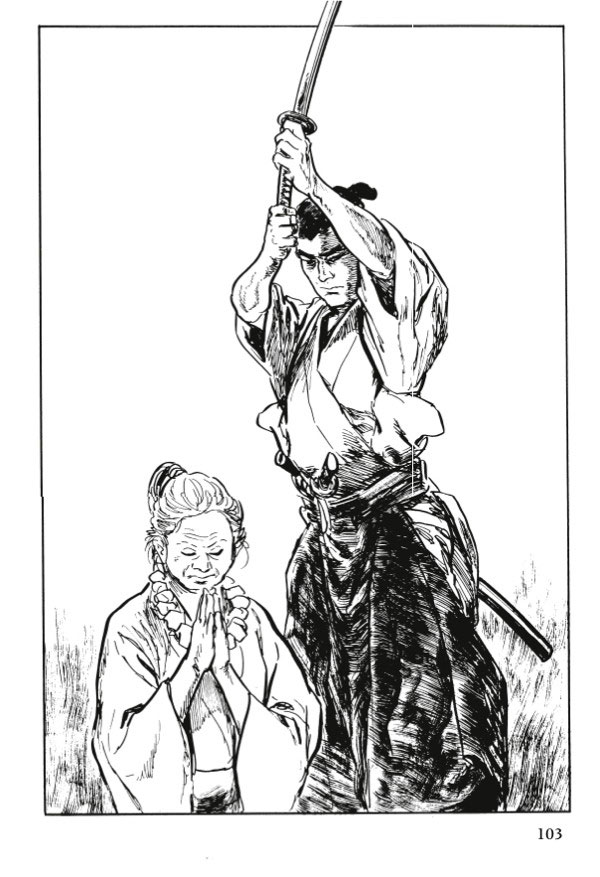 Having said what I have about history, what about the mythos, the elements which run deeper than ‘just’ history? Asaemon’s character, for one, is somewhat of an archetype. He is a cool, confident man who is skilled in killing, yet who also possesses a keen mind. Asaemon is not himself a samurai even if he holds the same position as they do within the government, yet he possesses the mind of a philosopher.

In a very real sense, Asamon’s character exists to pose philosophical answers to emotional conundrums. Samurai Executioner is more of a series of interconnected philosophical musings on the state of life than it is ‘just’ a manga about an executioner. To me, part of this goes hand in hand with one aspect of samurai as they exist in myth, that they’re entities and figures who were masters of philosophical contemplation and meditation as well as knowledge of combat.

Samurai Executioner, pardon the off-color pun, splits the difference between myth and history. Asaemon is a fantastical swordsman who displays virtually flawless techniques while also coolly offering up philosophical contemplations about compassion after having killed a person he knew in his youth. His is, very much so, a fantastical character. 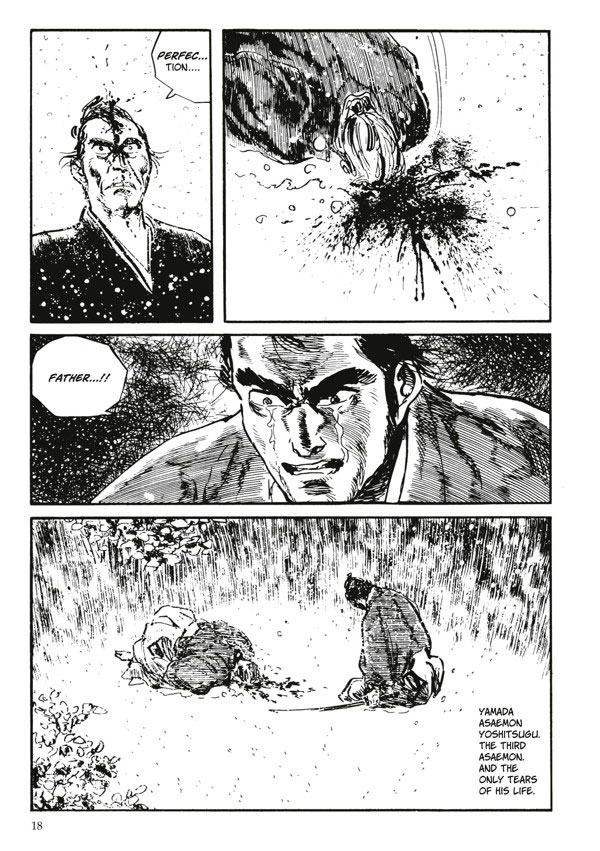 Yet, thankfully, he is not perfect, nor are the people he encounters. His first victim, a woman he knew from youth, is also a serial killer. She is not a composed, elegant femme fatale facing Asamon with dignity, but instead presented as a screaming, kicking woman who does not want to die. Her human reaction to her present situation breaks from the wholly stoic and romantic mold in which samurai stories are often presented as. Even the 47 Ronin never dared offer up a story or depiction about one of the ronin who, upon facing execution, screamed and begged for life.

The emotional crux of the second chapter comes when Asamon provides a kind of dignity and compassion to woman he has been ordered to test his sword upon. This, naturally, presents a conflict between himself and other members of the Shogunate who consider the act of granting any dignity to a prisoner as improper. Asamon, despite having committed his duty, presents a series of considerations to these men about what his he was summoned to do (test a blade) as opposed to what he did (execute a living person). 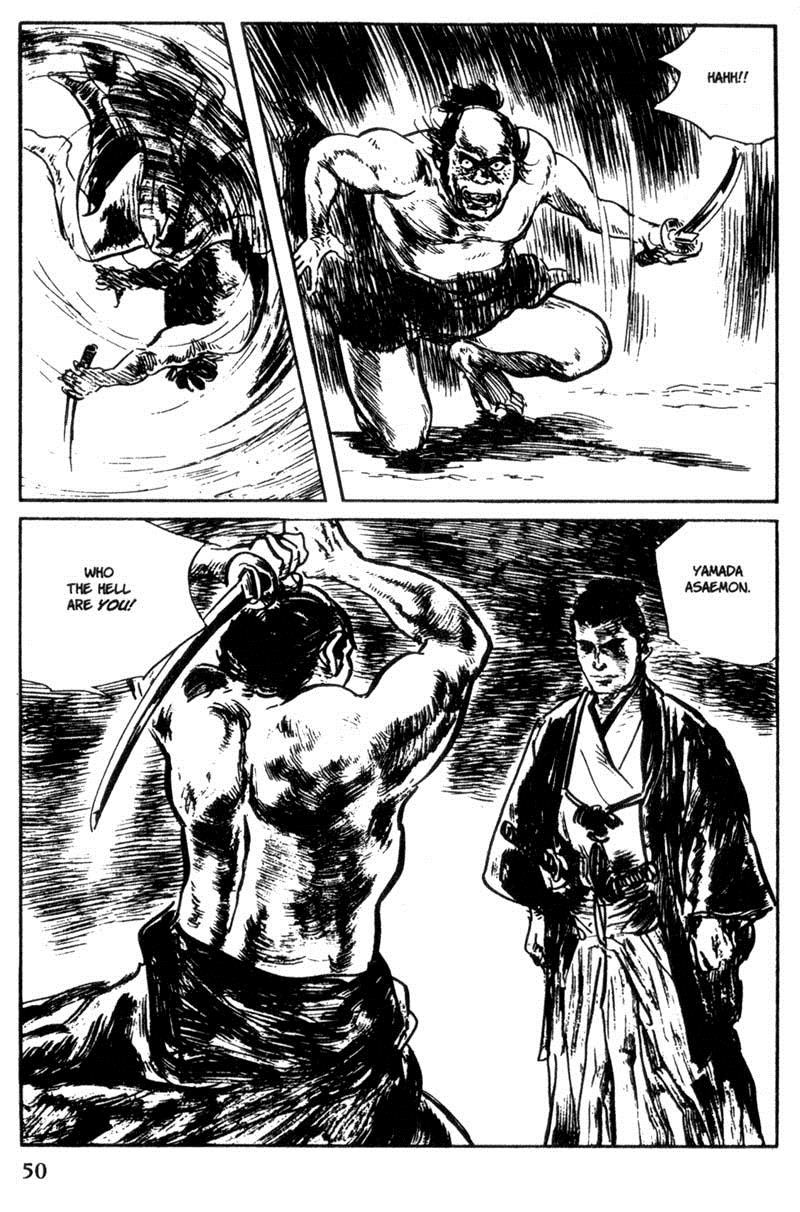 Asamon, claiming he is not actually an executioner nor a true government samurai in the strict sense, rhetorically emphasizes how he granted compassion to his victim because she, at least, deserved that much and it was in his power to provide it. He backs up his argument with his sword in one of the more dynamic panel sequences of the chapter. In the end, his compassion and rhetoric wins out, although there are obvious consequences for his actions which reverberate through the books.

Asaemon is a swordsman vast prowess, despite being a ronin, a person for whom, historically speaking, education and opportunity would have been drastically limited. Asaemon himself is handsome, stoic, and not without humanity, despite his position. He is a kind of narrative contradiction, perhaps the very best kind for forcing us, the readers, to consider our own complexities and simplicities.

Samurai Executioner is itself a paradoxical work, one steeped in a deep attention to realism, yet one which serves more as a fable than a historical account. Samurai Executioner, from the very start, asks readers what life is worth as well as how we live and die. 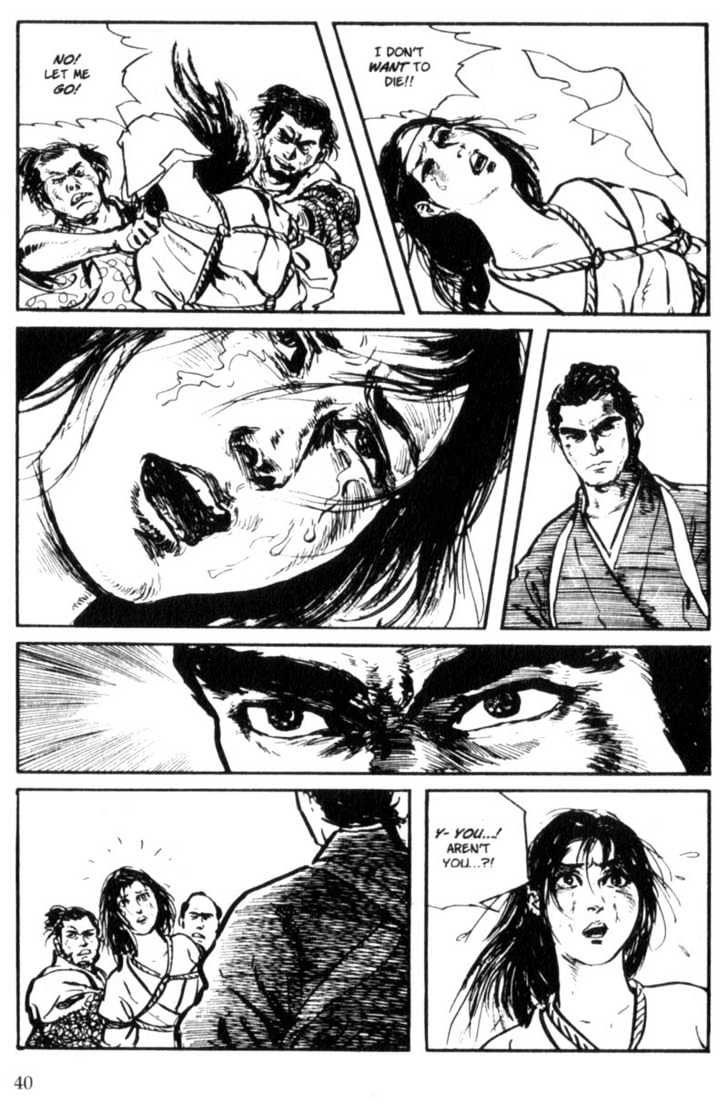 As I said before, it is not a pleasant thing to gaze upon, yet perhaps that is why we need books like Samurai Executioner. Sure, it’s fiction-ish, and it has as much focus on style as narrative, but it’s at least honest where it counts. By the end of stories that Asaemon enters into, there will be death, reflection and a fragile attempt to understand what it all means.

Samurai Executioner might not be high art, but is services the best ambitions of why art exists: to make us reflect upon who we are, what matters to us, and to contemplate our mortality if only for an instant. Will Samurai Executioner provide you with more answers than questions? Will it just be an edgy samurai manga? You’ll have to read it to find out.